Many people wonder what separates coconut milk vs coconut water, and while they do contain some of the same nutrients and characteristics, they are two very different things.

The further you get into a healthy lifestyle, the more you realize how important the small differences can be. In the case of coconut milk vs coconut water, the differences pertain to what part of the coconut they come from, their nutrient density, and the actual health benefits they represent. While both are popular and widely available, it is important to understand how they differ before you add either of them to your health regimen. [1]

Coconut water describes the water that builds up in a young coconut. When you see someone cracking open a coconut and drinking the liquid stored inside, they are drinking coconut water. In recent years, coconut water has seen a massive rise in popularity, due to its nutritional content and efficacy as a rejuvenating and rehydrating beverage following intense physical activity. Coconut water is high in both sodium and potassium, electrolytes that the body depletes when exercising. Studies have found that people who regularly drink coconut water after a workout have better rehydration rates than if they had only drunk water, but the effects are similar to any other electrolyte-infused sports drink. [2] 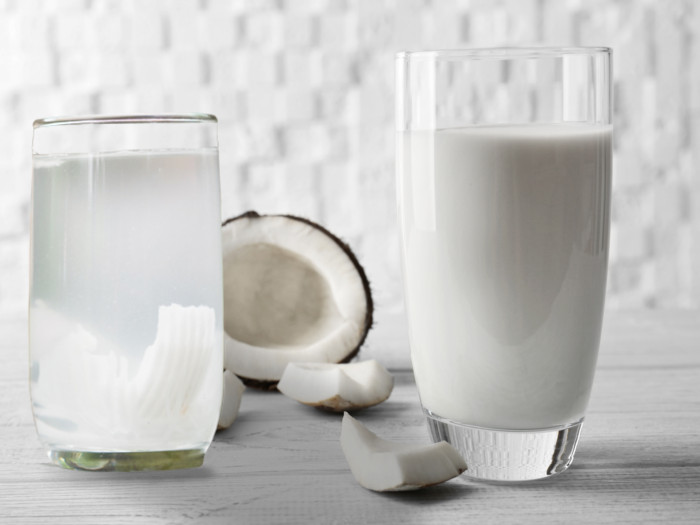 What is the difference between coconut milk and coconute water? Photo Credit: Shutterstock

Coconut water only contains about 45 calories per cup, and while this is more than normal water, it also provides more mineral and nutrient content than H2O. Adding coconut water to your diet is relatively limited to its use as a beverage, as opposed to its more versatile cousin, explained below. Coconut water is rarely used in cooking, and is basically clear in color, like coconut-flavored water. The nutrient composition of coconut water can help you recover following extreme exertion, while also protecting your cardiovascular system from high blood pressure, atherosclerosis, heart attacks, and strokes. [3]

Coconut milk is a product that comes with a mature coconut. As a coconut ages, the water found inside the young fruit will become incorporated into the flesh of the fruit, which increases in volume over the course of a coconut’s development. Unlike coconut water, which can be drunk freely from the inside of a coconut, coconut milk needs to be processed and removed from the meat of the coconut before it can be used. To prepare coconut milk, you must blend warm water with the coconut meat, and then strain the coconut shavings through a fine mesh colander. [4]

The resultant milk will be significantly thicker than coconut water, and will also have a very different nutrient profile. While there are less than 50 calories in coconut water, there are more than 500 calories in a glass of coconut milk. For that reason, this milk is rarely drunk but often used in cream-based dishes or particularly rich meals. There are also about 50 grams of fat in each cup of coconut milk, much of which is of the saturated variety. Therefore, people who are trying to lose weight or protect their cardiovascular health should be cautious in how much they use. This unusual milk also offers magnesium, vitamin C, fiber, and iron. [5]

Incorporation of coconut milk in your diet should be done carefully, due to the extreme calorie and fat levels, but it is highly praised for baking, as well as in the preparation of many soups and curries. A small amount of this potent milk will provide the flavor you are looking for, so use this milk in moderation. [6]

Rate this article
Average rating 3.2 out of 5.0 based on 23 user(s).
Read This Next:
Popular Articles