7 Surprising Benefits of Honey and Milk

Milk and honey are known for their benign properties. When combined together, they provide many surprising health benefits. This includes benefits in skincare and increased stamina. Milk and honey also have a biblical connotation. Jerusalem is referred to as the ‘land flowing with milk and honey’ in the Old Testament. Meant to denote fertility and abundance, it shows how the two were traditionally seen as a metaphor for all the good things in life.

Honey is traditionally used for health due to its antioxidant, antibacterial, and anti-fungal properties, as well as its soothing, anti-inflammatory effects on respiratory issues. Milk, on the other hand, has traditionally been praised for its vitamin and mineral content, including fat-soluble vitamins vitamin A and D B vitamins, and calcium, as well as its animal protein, and lactic acid. However, these attributes can combine when milk and honey are taken together, resulting in some unique and desirable benefits.

Health Benefits of Honey and Milk

Health benefits of honey and milk include the following;

Both honey and milk possess antimicrobial and cleansing properties. According to an article published in the Central Asian Journal of Global Health in vitro experimentation with honey showed that it could kill microbes that affect the skin, alter microbial pathogenicity, modulate immunological parameters, reverse resistance to antibiotics, inhibits tumor cell growth, promotes tissue repair, and protect against UV damage. 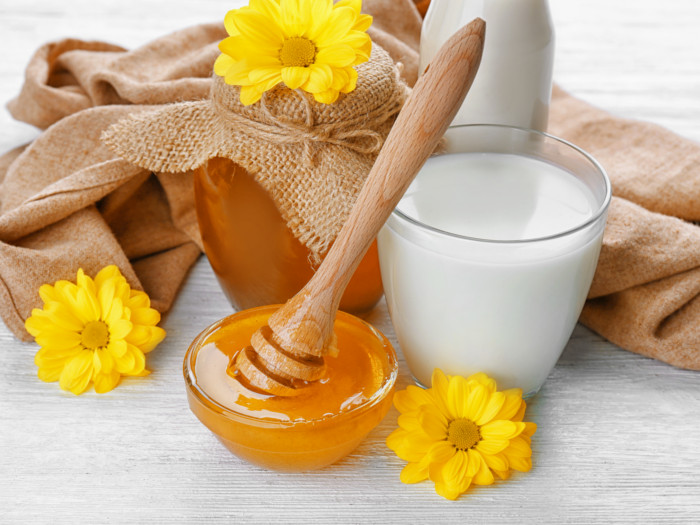 When mixed with milk, honey masks are effective for relieving acne. The face mask brings together the properties of both the ingredients. In fact, the two are common ingredients in natural cleansers because the mixture gives the skin a healthy glow. Alternatively, try the bath recipe famously attributed to one’s of the most alluring beauties of the world, Cleopatra. The Egyptian queen apparently took a bath in milk and honey.

Honey is a good source of prebiotics, according to a study published in the Journal of Agricultural and Food Chemistry. Prebiotics are nutrients that stimulate the growth and development of probiotics, the beneficial bacteria growing and developing in our intestines and digestive system.

Prebiotics have demonstrated a stimulatory effect on bifidobacteria, a type of probiotic found in milk. The carbohydrates and oligosaccharides in honey help promote the healthy and proper function of these beneficial bacteria, which are essential for the healthy maintenance and function of the GI tract. When the bacterial balance in the digestive tract is good, it eliminates a number of irritating conditions including constipation, cramps, and bloating.

A glass of milk and honey every morning is thought to improve a person’s stamina. Milk contains protein, while honey contains the necessary carbohydrates required for an effective stimulus of metabolism. A review published in the Journal of International Society of Sports Nutrition found that milk could be an effective post-exercise beverage. When compared with most sports drinks, milk is more nutrient dense for people who engage in strength and endurance activities.

Animal proteins from milk are broken down into basic amino acids by enzymes and are then reformed to create usable proteins for humans. The excess material in this transformation is then oxidized as usable energy. Proteins are an essential part of the human diet, and honey helps to stimulate their metabolism. 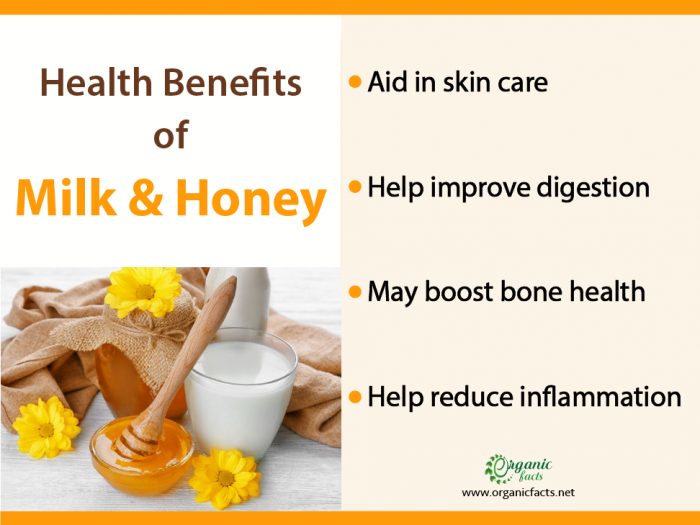 When milk and honey are mixed together, you can benefit from their combined antioxidant properties.

As research on honey continues, it is gradually becoming clear that honey acts as a carrier and transporter of nutrients from food throughout the body. Specifically, honey can improve the body’s acute uptake of calcium, of which milk is a rich source. An animal study published in The Journal of Agricultural and Food Chemistry found that honey promoted calcium absorption for a short period.

So, consuming honey and milk together will not only give your body the necessary nutrients (i.e. calcium) to benefit your bone health, it will also maximize its absorption in the body. Proper calcium levels can prevent conditions like osteoporosis and inflammation of the joints.

Honey and milk have both been used as remedies for insomnia and sleeplessness in alternative medicine. Individually, they are both effective, but the effects are strengthened when taken together. Honey is one of the rare sugary foods causing a controlled increase in the amount of insulin being secreted, which also promotes tryptophan released into the brain.

Tryptophan is normally converted into serotonin, which induces a feeling of relaxation. Furthermore, serotonin is commonly converted to melatonin, a well-researched sleep aid. A negative impact of tryptophan depletion on sleep continuity is well demonstrated in one study published in Psychiatry Research. Thus, honey and milk can be used to reduce sleeplessness.

People in many ancient civilizations, including the Greeks, Romans, Egyptians, and Indians, drank milk and honey to preserve their youth.  It is thought that the combination of milk and honey impacts the whole body, by making it agile and youthful. Since milk and honey can help ensure a long life, their combination was known as “the elixir of life.”

When milk and honey are mixed together, we also benefit from their combined antioxidant properties. Antioxidants attack the free radicals, one of the primary causes of skin degradation, wrinkles, and blotches. A study published in the International Journal of Food Microbiology found that honey has antioxidants that can control the growth of some foodborne pathogens.

Research has shown that milk and honey have a more pronounced effect on Staphylococcus bacteria than either milk or honey when taken on its own. It is also believed that honey, added to warm milk, cures flatulence, constipation, and intestinal disorders. It is also good for treating respiratory disorders such as cold and cough.

Honey does not become toxic when added to warm milk. However, honey should not be heated to temperatures higher than 140 degrees, according to a study published in the Ayurveda journal Ayu. According to the researchers, honey, when heated, produces a toxin called hydroxymethyl furfuraldehyde (HMF). Hence, it is recommended to add the desired amount of honey in warm milk, rather than hot milk, to get the full health benefits of this combination. So enjoy your cup of honey and milk!