The health benefits of Fennel essential oil can be attributed to its properties as an antiseptic, antispasmodic, aperitif, carminative, depurative, diuretic, emmenagogue, expectorant, galactagogue, laxative, stimulant, stomachic, splenic, tonic, and a vermifuge substance.

The essential oil of fennel is obtained through the steam distillation of crushed fennel seeds, an herb which bears the scientific name of Foeniculum vulgare. Fennel seeds have been in use in culinary applications and as a mouth freshener since ancient times. They are also widely used for medicinal purposes. These medicinal properties come from the various components of the essential oil of fennel, including alpha-pinene, anisic aldehyde, cineole, fenchone, limonene, myrcene, methyl chavicol, and trans-anethole.

Given below is a list of medicinal properties of fennel essential oil.

The essential oil of fennel has certain compounds which contribute to its antiseptic properties. By virtue of this property, fennel oil can protect wounds from becoming septic. It is also found to be effective in preventing incisions from becoming septic or getting infected with tetanus, particularly after surgeries, caesarian deliveries, and other more serious wounds.

Spasms can be fatal if not treated properly. Spasms are unwanted and abnormal contractions in respiratory tracts, intestines, muscles, or nerves, resulting in continuous coughing, hiccups, acute pain and pulling sensation in the intestines, cramps, muscle pulls, convulsions, or epileptic attacks. If not treated in time, a patient may have acute pain in the intestines or may run out of breath in cases of coughs and hiccups and could even die. Fennel essential oil has a relaxing effect on nerves, muscles, intestines, and the respiratory system and it pacifies spasmodic attacks, giving quick relief for the previously mentioned situations.

Aperitif is a similar property to purgative, but a little milder. An aperitif acts more on the intestinal peristaltic motion, rather than by adding to the bulk of bowel. Fennel oil can help to clear the bowels and provide relief from constipation.

As a carminative, fennel oil makes gases escape from intestines and can give a person immense relief from problems such as indigestion, restlessness, pain in the abdomen, stomach, and chest, as well as lessen hypertension. It also has another benefit of not letting additional gases form. It is very good for people with chronic gas trouble. 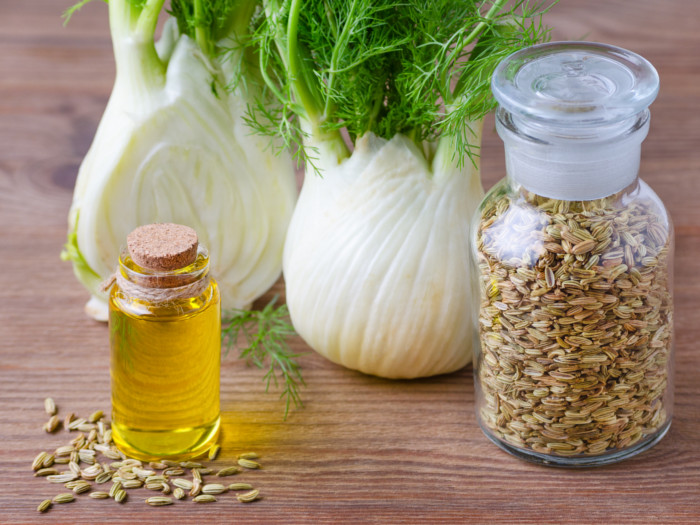 Fennel essential oil is known to be a potent and powerful aid for digestive health. Photo Credit: Shutterstock

Fennel oil is an effective worm destroyer. It kills the worms and their spores in the intestines and the excretory tracts. This is great for children, who frequently suffer from parasitic worms, and can prevent malnourishment or stunted growth.

Fennel oil increases the frequency of urination and the quantity of urine, thus helping not only remove excess water, sodium, uric acid, bile salts, and other toxic elements from the body but also lowering blood pressure, cleansing the kidneys and reducing fat. There is just one thing to remember; if you are not suffering from swelling or accumulation of water in the body, then you should drink more water when taking fennel oil since very frequent urination can cause dehydration.

Women who have problems with irregular, obstructed or painful menstruation can benefit from the emmenagogue property of fennel oil. Not only does it help to clear obstructed menses and make them regular, it also gives relief from the other symptoms associated with periods such as headaches, pain in the abdominal area, dizziness, and mood swings. It also helps to prevent untimely or premature menopause.

This oil can play an important role for lactating mothers. It can increase the amount of milk in them by boosting production of a hormone called estrogen. This benefits the baby as well as the mother. This milk also inherits some of the carminative and digestive properties of fennel oil and protects the baby from flatulence, indigestion, and gas, which are very common in infants.

Fennel oil is a good laxative and benefits in both chronic and acute constipation. However, unlike synthetic laxatives, it has no side effects and can be used regularly.

Fennel oil acts as an emmenagogue, galactagogue, and diuretic due to a single property, which is its stimulating quality. Being a stimulant, it promotes all the activities going on inside the body. It stimulates the brain and neural activity, nervous system, secretions from endocrine and exocrine glands (including the secretion of milk, sebum, sweat, tears, urine, and discharges during menses), digestive system, and excretory system. This stimulating effect also helps to overcome fatigue, dizziness, and depression.

Being a stomachic simply means being a protector of the stomach. Fennel oil helps keep the stomach healthy and functioning properly and maintains the normal function of all the secretions of digestive acids and bile. Furthermore, it protects the stomach from infections and ulcers, thus ensuring the all-around health and wellness of the stomach.

Just as stomachic means something is good for the stomach, splenic means something that is good for the spleen. The spleen plays a vital role in our body as it is involved in the production of lymphocytes and red blood cells. A healthy spleen results in a good level of red blood cells and a more healthy and active life. Fennel oil helps to maintain the spleen and keeps it toned. It also protects it from various infections.

This means an agent which tones and boosts health. Fennel oil works as a tonic by toning all the systems that function in the body, such as the respiratory, digestive, nervous and excretory systems, while also facilitating the absorption of nutrients in the body, thereby increasing strength and boosting immunity.

Fennel oil does the work of a detoxifier and purifies the blood, and is therefore considered a depurative. Actually, it helps blood empty itself of blood urea, uric acid and certain unwanted hormones, which are the primary toxins found in our bloodstream. Apart from this, it also balances sodium level in the blood and helps in the removal of other toxic substances which get into the blood from external sources.

Fennel oil has proven to be effective in providing relief from the depositions of mucus and phlegm that lead to congestion of the nasal tract, larynx, pharynx, bronchi, and lungs due to cold and viral infection. It is particularly effective against frequent or chronic coughs.

Word of Caution: An organic component called trans-anethole, present in fennel essential oil, boosts the production of the estrogen hormone. Although this is beneficial for lactating mothers, it is harmful for pregnant women and women with breast or uterine cancer or tumor, since excess estrogen is linked to the occurrence of  such cancers. In heavy doses, it may have narcotic effects and can result in convulsions, hallucinations, and mental imbalance. People suffering from epilepsy or with a history of that condition should avoid using fennel essential oil.

Rate this article
Average rating 4.3 out of 5.0 based on 147 user(s).
Read This Next:
Popular Articles