The health benefits of fennel are many and may include relief from anemia, indigestion, flatulence, constipation, colic, diarrhea, respiratory disorders, and menstrual disorders. It may also aid in eye care. Fennel, which has the scientific name Foeniculum vulgare miller, or its essence, is widely used around the world in mouth fresheners, toothpaste, desserts, antacids, and in various culinary applications.

Fennel (Foeniculum vulgare) is an aromatic herb that originated in the Mediterranean region and has many culinary and medicinal uses. It has not been spread and naturalized as an herb around the world, but still primarily grows in coastal climates and on riverbanks. It is one of the main components of the alcohol absinthe, although the plant itself does not have the hallucinogenic properties for which the liquor is known. [1]

Apart from the uses of fennel already mentioned, there are numerous medicinal uses and health benefits, mainly due to the components of its essential oils, which are summarized below. 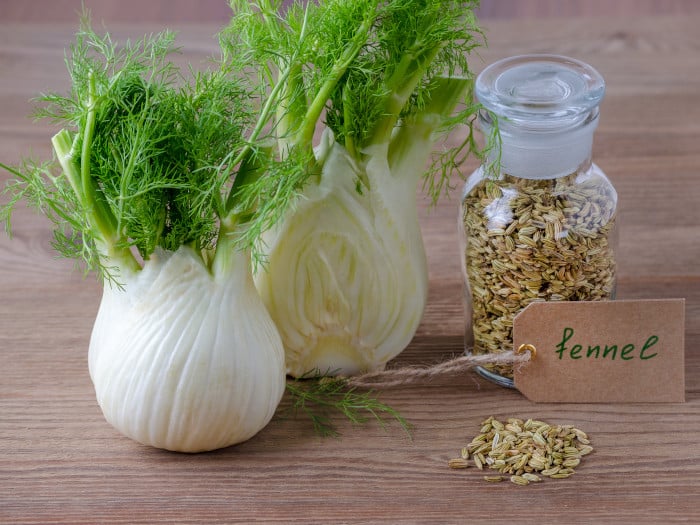 Complete your platter with a handful of fresh fennel seeds. Photo Credit: Shutterstock

According to the USDA National Nutrient Database for Standard Reference, fennel bulb is a source of energy, vitamin C, dietary fiber, potassium and other essential minerals like calcium, phosphorus, and sodium. It provides small amounts of iron, magnesium, zinc, niacin, and vitamin K. It also contains B-vitamins, beta carotene, vitamin A, flavonols. [3]

Let us look at the top health benefits of fennel in detail:

One cup of fennel bulb is known to contain almost 20 percent of the daily requirement of vitamin C, making it quite a rich source of this beneficial vitamin of our diet. Vitamin C improves general immune system health, produces and repairs skin tissues, helps form collagen, and protects the blood vessel walls as an antioxidant against the harmful effects of free radicals that can frequently lead to heart diseases. [4]

Iron and histidine, an amino acid found in fennel, are both helpful in the treatment of anemia. Whereas iron is the chief constituent of hemoglobin, histidine stimulates the production of hemoglobin and also helps in the formation of various other components of the blood. [5]

It is a common practice, particularly in the Indian Subcontinent, to chew fennel seeds after meals. This has been done for many years as it is thought to facilitate digestion and to eliminate bad breath. [6]

Some of the components in the fennel essential oil are probably the stimulants as they encourage secretion of digestive and gastric juices, reduce inflammation in the stomach and intestines, and facilitate proper absorption of nutrients from the food. Furthermore, it can eliminate constipation and protect the body from a wide range of intestinal troubles that can stem from being blocked up. It also has anti-acidic (basic) properties and is extensively used in antacid preparations. In culinary applications, it is also used as the main ingredient in many appetizers.

Fennel is very popular as an antiflatulent, due to the carminative properties of the aspartic acid found in it. Its extract can be used by many, from infants to the elderly, as a way to reduce flatulence and to expel excess gas from the stomach. It is commonly used in medications to reduce symptoms of non-ulcer dyspepsia and flatulence in infants and young children. [7]

Fennel can be a great source of fiber, as mentioned above, but besides the advantages to digestion that fiber provides, it also helps maintain healthy levels of cholesterol in the bloodstream, according to research conducted, in the American Journal of Clinical Nutrition. This means that it can stimulate the elimination of damaging LDL or bad cholesterol, which is a major factor in heart diseases, atherosclerosis, and strokes. [9]

The raw vegetable itself hasn’t been extensively studied with regards to cancer protection. However but the fennel seed extract has been explored a bit more, and the findings of one study regarding cancer protection were quite impressive. It shows that, in animal subjects, the extract can not only inhibit the growth of tumors, thanks to its concentrations of flavonoids, alkaloids, and phenols, but it even has the potential to be chemoprotective against the harmful effects of radiation during cancer treatment. According to the same study, fennel seed extract exhibits anticancer potential against breast cancer and liver cancer. [10] [11]

Fennel is a very rich source of potassium, which can be an essential nutrient in our bodies and is vital for a number of important processes as per a report published in the Journal of Hypertension. One of the attributes of potassium is its quality as a vasodilator, which means that it relaxes the tension of blood vessels, thereby reducing blood pressure. High blood pressure is connected to a wide range of health issues, including heart attack, stroke, and atherosclerosis. Also, for diabetics, blood pressure issues can make the management of their insulin and glucose levels very difficult and can be the cause of many potentially lethal complications. Incorporating a cup of fennel bulb in your daily diet can increase your potassium levels and all the benefits that come along with it. [12]

Potassium, found in high levels in fennel bulbs and seeds, is an electrolyte, which means that it can facilitate increased electrical conduction throughout the body. This is according to research published in the Yale University School of Medicine in 1939. This includes connections within the brain, which is a veritable switchboard of electric currents. Potassium can help increase brain function and cognitive abilities through this quality. Also, fennel is a vasodilator, which means more oxygen reaches the brain and neural activity can work at optimal functionality. [13]

Fennel is helpful in curing diarrhea caused by bacterial infections, as it may have some components such as anethol and cineole which may have disinfectant and antibacterial properties. Some amino acids, such as histidine, can aid in digestion and the proper functioning of the digestive system, thereby helping to eliminate diarrhea due to indigestion. Fennel has long been used by indigenous cultures as a way to eliminate diarrhea. [14]

May Alleviate Symptoms of Colic

There are studies that suggest that herbal tea made using various herbs including fennel and fennel oil has the potential to relieve symptoms of colic. Fennel has certain antispasmodic qualities which also help it relax muscles and reduce the discomfort associated with the colic. Polymeric and heavy molecules are useful in the treatment of renal colic. Such polymers, also called phytoestrogens, are found in anethole, a component of the fennel essential oil. However, more scientific research is required to investigate the benefits and effects on humans. [15]

Fennel being rich in many nutrients including vitamin C helps boost the immune system and protects the body against infections and damage caused by free radicals. [16]

Fennel is also an emmenagogue, meaning that it is thought to ease and regulate menstruation by properly regulating hormonal action in the body. Furthermore, fennel is used in a number of consumer products to reduce the effects of PMS, and it is also used traditionally as a soothing pain reliever and relaxing agent for menopausal women. [17]

Incorporating fennel into meals can help protect the eyes from inflammation, as well as help reduce disorders related to premature aging and macular degeneration. This is due to the abundance of antioxidants (vitamin C and amino acids like arginine are very beneficial for rejuvenation of tissues and the prevention of aging), detoxifiers, and stimulants. They are specifically found in fennel essential oil, as well as minerals like cobalt and magnesium. Finally, the juice of its leaves and the plant itself can be externally applied to the eyes to reduce irritation and eye fatigue.

Fennel is useful in respiratory disorders such as congestion, bronchitis, and cough due to the presence of cineole and anethole, which are expectorant in nature, among their many other virtues. Fennel seeds and powder can help break up phlegm and prompt loosening of the toxins and buildup of the throat and nasal passages for elimination from the body to ensure quick recovery from respiratory conditions. [19]

Fennel is a diuretic, which means that it can increase the amount and frequency of urination, thereby helping the removal of toxic substances from the body and helping in rheumatism and swelling. It is also touted as increasing the production and secretion of milk in lactating mothers; since this milk contains some properties of fennel, it is an anti-flatulent for the baby, as well. It strengthens hair, prevents hair loss, relaxes the body, sharpens memory, and has a marvelous cooling effect in summer. This can be achieved if the pale, greenish-yellow water, in which it is soaked, is ingested with a bit of sugar and black salt.

Words of Caution: You must remember that often, too much of anything is harmful. Certain components of the fennel essential oil such as anethol, and a few other chemicals present in the plant itself can be dangerous if ingested in too large a quantity. You must remember that the compounds which can kill bacteria and microbes in low doses can be harmful to you too. Excess use of fennel can cause difficulty breathing, increased palpitations, irregular heartbeat, and various neural problems. So, enjoy fennel’s impressive benefits in moderation. If you have any questions, speak with a healthcare professional.

Rate this article
Average rating 4.0 out of 5.0 based on 570 user(s).
Read This Next:
Popular Articles