Goji, or wolfberry, is used in traditional Chinese medicine and in food preparations in China. The whole plant, including the berries, leaves, roots, and root bark, has been used for medicinal purposes. In traditional medicine, goji berries were used to strengthen the immune system, improve eyesight, lower cholesterol levels, and control diabetes. Goji berry has also been associated with improved liver health, cardiovascular protection, potential anti-cancer impact, and protection of brain cells and skin from UV radiations.

What is Goji Berry?

Goji or wolfberry is actually divided into two sub-species, which are known as Lycium barbarum and Lycium chinense, both belonging to the Solanaceae family. Wolfberry is native to China but is also grown in warmer regions around the world, including Australia, North America, the Mediterranean basin, Central Asia, and Southwest Asia. China is the biggest exporter of wolfberry in the world. [1]

The English name goji is derived from the Mandarin name gouqi. The other name, wolfberry, is thought to have originated from the Greek name of the plant Lycium, from Lycos or wolf in Greek. Goji tree grows up to a height of about 3 meters. The berries are small, up to 2 cm, dark red or orange, and oblong shaped. These berries taste anywhere from bitter to sweet.

Goji is not only used as food and medicine in China, but also in Asian countries such as Korea, Japan, and Vietnam. 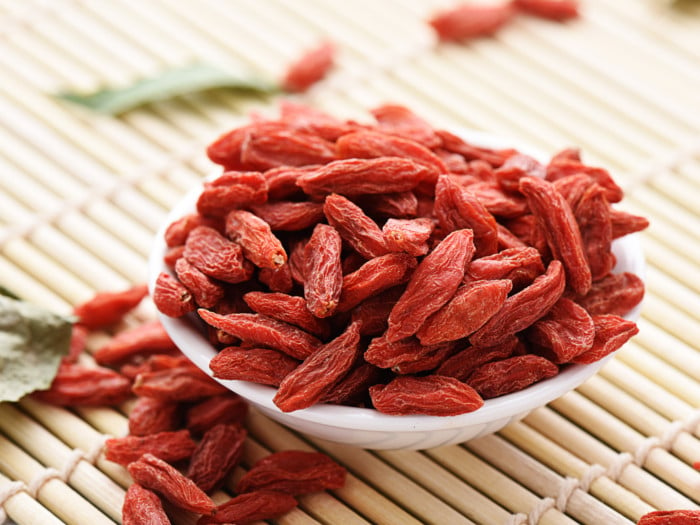 Goji berries have many important health benefits. Let us discuss them in detail below.

Goji has been used as a part of traditional medicine to help lower blood sugar and thus manage symptoms of diabetes. A 2019 review article published in the Oxidative Medicine and Cellular Longevity journal also highlights the hypoglycemic effect of these berries, citing them as a traditional, effective, and safe hypoglycemic agent. Another research paper suggests that goji berries can make an effective dietary supplement as they were observed to reduce waist circumference and LDL cholesterol level in the long-term, both of which are factors affecting diabetes. [4] [5]

Antioxidants, as the name suggests, are a wide range of chemicals that react and neutralize the action of free radicals produced in our body. Free radicals, if left alone, can damage our tissues, cells, cell membranes, and DNA over time, resulting in the development of various diseases. Research has suggested that the consumption of goji may help in the reduction of medical conditions related to free radicals. The antioxidants present in goji berry also help in boosting the immune system. [6]

Free radicals can attack the heart, just like any other organ. Although this happens over a long period of time, it is still required to take precautionary measures. Goji berry contains anti-oxidant chemicals that protect the heart from the attack of free radicals. Recent studies have noted significant free radical scavenging in the heart by goji berry extracts. [7]

The health benefits of goji berry include general well-being and a healthy body. Results of a study conducted suggest that consumption of goji berry enhances and improves gastrointestinal functions and reduces stress and fatigue. It also improves neurological and psychological performance as well. [8]

Goji berry was not only eaten as food in ancient days; the Chinese also used it to treat cancer in their traditional medicine. Research published in the Drug Design, Development and Therapy said that L. barbarum polysaccharides, the primary component of L. barbarum berries, has shown an antitumor effect against various types of cancer cells. In the study conducted on laboratory mice showed that goji berry compounds had the ability to stop tumor growth (Cheng J, et al. 2014). [9]

Free radicals can attack neurons or brain cells and these damaged brain cells can develop neurodegenerative diseases. These diseases can be effectively countered by consuming goji berry. Goji berry extracts have shown significant neuroprotective activity. The team that conducted research ascertained that goji berry possesses anti-aging effects and has suggested it as preventive medicine. [10]

The liver is one of the most resilient organs in our body and it can protect itself from many chemicals, free radical, and physical damages. Goji berry has been used traditionally in Chinese medicine to treat liver diseases. The extracts of goji berry showed free radical scavenging and other protective properties in the liver in animal research. This is promising for future studies examining its impact on humans. [11] [12]

Ultraviolet radiation is one of the threats that we are all facing, due to the depletion of the ozone layer in several parts of the world. The exposure of the skin to UV radiation can result in skin damage. Some studies utilizing animal subjects have shown that goji berries significantly reduce skin inflammation and immune suppression, owing to their antioxidant potential (Reeve VE. et al., 2010). These results suggest that enjoying goji berry juice may provide extra protection for more susceptible people. [13]

Some of the traditional Chinese uses of goji berry were to induce sleep and reduce stress. Some research has shown that goji berry, when given to human subjects, improved their quality of sleep without having any adverse side effects. [14]

Goji berry has long been used in traditional Chinese medicine as an aphrodisiac. It is considered by some that the aphrodisiac properties of goji berry lie in its ability to concluded that it can reduce damage caused to the testes and provide protection against oxidative stress due to the presence of hydrogen peroxide in it. Hydrogen peroxide can decrease semen count as well as sperm quality. While this is considered a traditional usage, more research is still needed to confirm this health benefit. [15]

Goji berry, due to its antioxidant properties, also helps in improving eyesight. The antioxidants protect the eyes from free radicals that may cause loss of eyesight, cataracts, and other eye-related disorders. [16] [17]

Side Effects of Goji Berries

Although goji berry possesses many health benefits, it’s necessary to provide a word of caution about the potential side effects of goji berry is necessary.

Allergic Reactions: Goji berries are known to be allergenic to some people, causing reactions such as facial angioedema, dyspnea or shortness of breath, hives, itching in the mouth or ears, armpits, axilla, skin rashes, anaphylaxis, episodic rhinitis, and rhinoconjunctivitis. [18]

Warfarin: Goji berries can also interact with some medications, and may cause bleeding. Warfarin is one of the drugs that is known to be reactive with goji berries. Warfarin is used as an anticoagulant and its reactions with goji berries during treatment include induced bleeding. Patients undergoing treatment with warfarin, reported epistaxis, bruising, and rectal bleeding after taking goji berry juice. Aside from warfarin, aspirin, heparin, ibuprofen, and naproxen users also shouldn’t consume goji berries. [19]

Other Medications: Goji berries can also react with certain antibiotics, antifungals, antivirals, anticancer drugs, antidepressant drugs, cholesterol-lowering drugs, drugs related to heart and blood vessels, hormonal drugs, immunosuppressants, and drugs for the treatment of osteoporosis. Users of these drugs should not take goji berries, as reactions might occur. Any medical applications of goji berries should be checked with your physician first, just to be safe!

Rate this article
Average rating 3.9 out of 5.0 based on 312 user(s).
Read This Next:
Popular Articles