Loquat: Benefits, Side Effects, & How to Eat

Loquats and loquat leaf tea have several health benefits, that may include the ability to soothe the respiratory tract, manage diabetes, and protect bone mineral density. They might also help improve gastrointestinal health, lower cholesterol levels, and strengthen the immune system.

If you’ve ever been walking through south-central China and stumbled across a small evergreen shrub or tree with bright orange fruit, then perhaps you’re familiar with loquat. Scientifically called Eriobotrya japonica, the loquat is also known by other names such as Chinese plum, Japanese plum, Japanese medlar, Pipa, Nispero, and Maltese plum. [1]

Round or oval-shaped and as large as a small plum, the fruits can have yellow or orange skin, sometimes with a red blush. The tangy flesh of the fruit is white, yellow, or orange with brown seeds, and it can be eaten either fresh or in dried form. The taste of the loquat fruit has been compared to a cross between mango and peach. The brightly colored, blemish-free ones are juicy as compared to the greenish ones which are sour and acidic.

Being one of the first fruits to be cultivated in the Asian continent, it is native to China but was naturalized in Japan more than a millennium ago. There are two main cultivated varieties of loquat: Chinese and Japanese. In East Asia, there are said to be over 800 varieties. Today, it is cultivated in many parts of the world. Loquat fruits, seeds, and leaves may have medicinal properties and have been historically used as folklore medicine in China for thousands of years. [2] [3] [4] 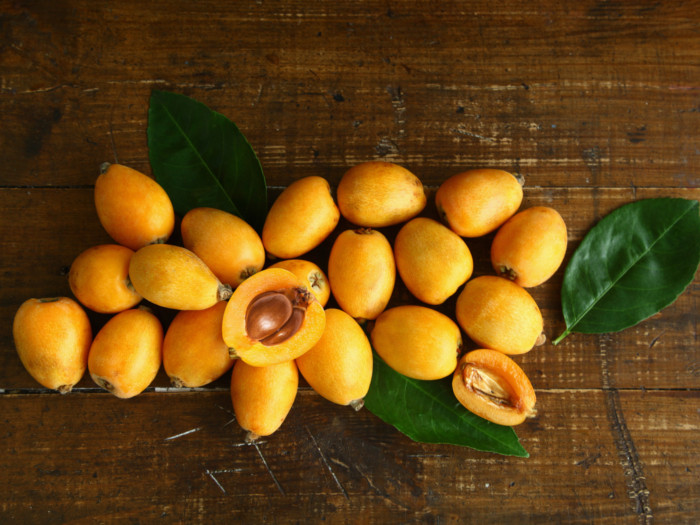 Loquats are a good source of minerals like iron, calcium, manganese, potassium, phosphorus, zinc, copper, and selenium. Low in cholesterol and calories, they contain monounsaturated fats like omega 3 fatty acids and omega 6 fatty acids. A medium-size loquat (16g) may contain 7.5 calories and about 2 grams of carbohydrates. [8]

Let’s take a closer look at the many health benefits of loquat.

The Chinese and the Japanese use dried loquat leaves to make tea as a traditional remedy that may prevent and ease cough with phlegm as well as bronchitis. Loquat tea (also known as biwa cha in Japan) is used as an expectorant, either when drunk or gargled, as it may cause coughing and through that, the expulsion of mucus and phlegm. [9]

Researchers found, in a 2017 rodent study, that fallen loquat leaves may have been effective relieving cough due to a higher concentration of triterpenoids whereas the extract of growing leaves might have had an antitussive or an inhibitory effect on cough due to its higher content of flavonoid compounds. [10]

Loquat is a wonderful source of vitamin C, which may help stimulate the production of white blood cells, the body’s first line of defense against pathogens, and may also work as an antioxidant to prevent chronic illness. Furthermore, vitamin C is needed for the production of collagen, which may aid the growth and repair of tissues throughout the body. The loquat leaf may also produce acids containing antigens like megastigmane glycosides and polyphenolic compounds, which may act as antiviral agents. Triterpene compounds can help destroy rhinovirus, which causes the common cold. [11] [12]

Loquat tea can often be suggested for managing diabetes, as blood sugar has been shown to significantly reduce in those who regularly consume it. The unique organic compounds found in loquat leaves and the seed extract can regulate insulin and glucose levels, which may help protect against diabetes. Also, for those living with diabetes, avoiding spikes and drops in blood sugar is crucial, which this tea may help with. [13] 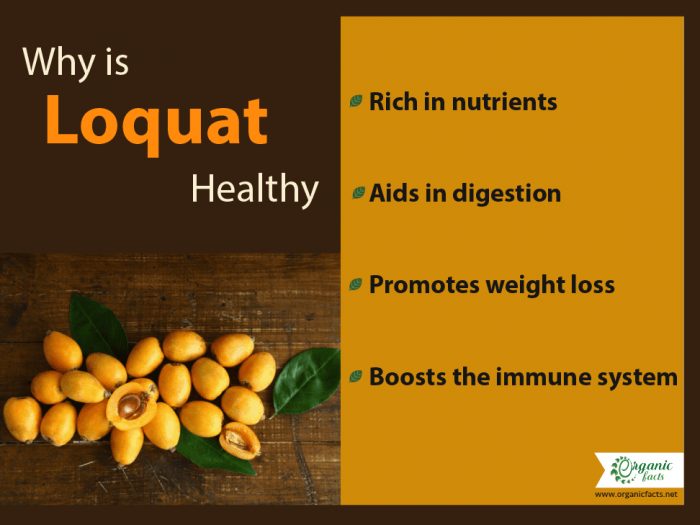 Loquats can be added to fruit salads or stewed with cinnamon, spices, and sugar.

Losing bone mineral density is a major problem for many people as they age, particularly for women following menopause. Loquat leaves may have shown to inhibit bone mineral density loss, owing to the presence of a natural triterpene compound called ursolic acid. Studies show that ursolic acid, when extracted from loquat leaves, may have the potential to stimulate osteoblast differentiation and may enhance new bone formation. [14]

May Aid Digestion and Weight Loss

Pectin is a particular type of dietary fiber found in loquat fruit, and it may often be praised as a digestive aid. Dietary fiber can bulk up the stool and may stimulate peristaltic motion, which can help with the regularity of bowel movements. If you suffer from constipation, diarrhea, cramping, bloating, or other stomach disorders, dietary fiber may ease that inflammation and may improve the health of your gut. Eating more fiber may also keep you full for longer, stopping those hunger pangs that make you overeat. [15] [16]

Drinking loquat tea may potentially help lower LDL or ‘bad cholesterol’ levels. A test-tube study showed that loquat leaf extracts may curb the increase in serum glucose, total cholesterol, and triglyceride levels. Another study showed that the ethanol extract of loquat seeds exhibited a suppression effect on LDL oxidation due to the presence of phenolic compounds. However, research on humans is required to understand the potential of this health benefit. [17]

May Protect the Brain

The powerful antioxidants contained in loquat may help combat oxidative stress due to free radicals, which is one of the primary causes of neurological degeneration and memory loss. [18]

How To Eat Loquats?

If you are lucky to have a loquat tree in your backyard, you can eat the first fruits of the year just as is. They grow quickly in clusters and have a fuzzy skin that can stain your fingers and nails when you peel many of them together. It is best to use kitchen gloves while handling them. Alternatively, you can slice the fruit into half and eat around the skin. Wash your hands under running water to remove any kind of stains. It is worth the effort to bite into a succulent, juicy loquat! [19]

Loquats can have a single seed or sometimes, two or three. The seeds have a mild sedative effect; so it is best avoided. You may find canned loquats from Taiwan in your supermarket aisle if you don’t have access to fresh ones. [20]

Here are some delicious ways you can use loquats. [21]

Word of Caution: Too much intake of loquat leaf extract (a concentrated form occasionally sold in health food stores or naturally derived) can cause toxic myopathy, which is weakness and non-specific pain. The seeds of the loquat fruit contain toxic substances and can be life-threatening if consumed in excess.
[23] [24]