The health benefits of lentils may include improved digestion, a healthy heart, diabetes control, cancer management, weight loss, prevention of anemia, and better electrolytic activity due to potassium. They are a good source of protein and are great for pregnant women. They may aid in the prevention of atherosclerosis and in maintaining a healthy nervous system.

Lentils are edible pulses or seeds that belong to the legume family. These mostly consist of two halves covered in a husk. Both the seeds are lens-shaped, which is probably why they are named Lens culinaris in Latin. They are also one of the oldest known sources of food, dating back more than 9,000 years.

Lentils can be consumed with or without the husk. Prior to the invention of milling machines, they were eaten with the husk. The husk contains the highest amount of dietary fiber. After the milling process was invented, the husk or skin was removed and the dietary fiber in lentils disappeared.

Lentils with a high protein content are considered an inexpensive source of protein. They are a rich source of essential amino acids like isoleucine and lysine. They are also a good source of micronutrients such as vitamins and minerals. [1]

Lentils are consumed much more often in Asian countries, particularly India. India has the largest number of vegetarians and lentils can be a substitute for meat in supplying the required protein. One very good way to have lentils is after they have sprouted because they contain methionine and cysteine. These two amino acids are very significant in muscle-building and strengthening of our body. Methionine is an essential amino acid that is supplied through the food, and cysteine is a non-essential amino acid that can then be synthesized. 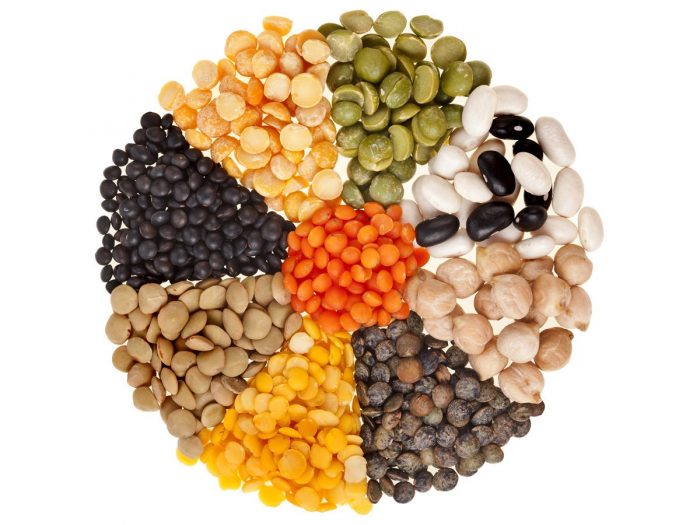 Lentils contain the highest amount of protein originating from any plant. The amount of protein found in them is up to 35%, which is comparable to red meat, poultry, fish, and dairy products. As per the USDA, raw lentils contain carbohydrates (15-25 grams per 100 grams). They are a good source of dietary fiber and also have a low amount of calories. Other nutritious components found are molybdenum, folate, tryptophan, manganese, iron, phosphorus, copper, vitamin B1, and potassium. [2]

Lentils are also another source of phytochemicals and phenols. Both of these organic chemicals are known to provide health benefits, but the mechanism behind their work is yet to be determined. Often, lentils and meat are compared for their effectiveness and many people vote for meat as the best source of protein. It is true that lentils do not contain all the amino acids, but they do have less fat content when compared with meat.

Lentils, cultivated ever since the advent of early agriculture, have been a part of our diet for quite long now. They provide multiple health benefits, including the following:

Our organs and muscles may need a constant supply of protein for the repair and growth of the body. Lentils, especially sprouted lentils, contain all the essential amino acids that are needed by our body for good muscle-building and smooth functioning of the body.

A comparative study published in The American Journal of Clinical Nutrition showed that in the various categories of foods, dietary fiber was found to be possibly high in the case of the legume family. Lentils, along with beans and peas, belong to the legume family. Dietary fiber-filled food such as lentils may help in controlling blood sugar levels. Dietary fiber may also slow down the rate at which food is absorbed by the blood and thus maintains the sugar level constantly. [3]

As lentils contain high levels of dietary fiber, they may improve digestion if consumed regularly. They may also help in easy bowel movements, resulting in decreased constipation. Although lentils tend to cause bloating and gas, consuming soaked or sprouted lentils make it easy for you to digest them.

Lentils, with their negligible amounts of fat, are a potentially ideal source of protein without adding any extra fat to the body, thereby promoting a healthy heart. Lentils contain magnesium and potassium, both of which may help in relaxing cardiovascular muscles and lowering blood pressure levels.

Research led by Dr. Xu at the Department of Cereal and Foods Sciences in North Dakota, USA showed that the consumption of lentils provides a supply of antioxidants that decreased the chances of developing atherosclerosis. Also, these antioxidants play a role in neutralizing free radicals and thereby preventing cell and gene damage (aging). [4]

Studies conducted by Elvira González De Mejía & Valentin I. Prisecaru at the University of Illinois have found that plant lectins, a separate type of plant protein originating from foods like lentils, wheat, peanuts, peas, and soybeans have a great influence on cancer cells. Research studies have shown that these lectins cause cytotoxicity and apoptosis, which means that they have great potential to control cancer growth. [6] [7]

Lentils are a good source of vitamin B-complex, such as folate or folic acid. The consumption of folic acid by pregnant women helps in preventing birth defects. According to a study by Susan J Duthie, at the Rowett Research Institute in Aberdeen, UK, a lack of folic acid often results in neural tube defects. Folate, found in lentils, helps in the formation of red blood cells, is possibly good for pregnant women, and plays a key role in maintaining homocysteine levels. It is also known to be effective against hypertension and DNA damage, which may result in cancer. [8]

Research studies suggest that the regular consumption of lentils can help in weight control and increase satiety. [9]

Lentils contain a potentially high amount of iron, which is needed by the body for optimum hemoglobin production. About 36% of the iron of the daily recommended value can come from eating 1 cup (200 grams) of lentils every day.

Potassium, one of the minerals found in lentils, is regarded as a better substitute for electrolytic activity than sodium. Many diseases have been associated with a high sodium content and a low potassium content in the body. Apart from acting as an electrolyte, potassium is also helpful for the functioning of a number of organs like the heart, brain, and kidney.

Lentils are a good source of many vitamins, including vitamin B3, which may play a significant role in boosting the digestive and nervous systems. Vitamin B3 offers many other benefits, including cholesterol control and improving the lipid profile. [11]

Side Effects of Lentils

Although lentils are good for your health and are the best alternative for meat, poultry, and fish, they also have a few disadvantages, which include:

Risk of Kidney Stones: Research conducted by Massey et al. at the Washington State University’s Department of Food Science and Human Nutrition showed that some lentils such as soybeans, soy foods, peanut butter, and refried beans, contain high concentrations of oxalate compounds. These oxalate compounds were responsible for the formation of kidney stones. Therefore, individuals who have kidney stones should stay away from legumes and lentils. [12]

Risk of Kidney Diseases: Consumption of high levels of protein has other side effects as well. On average, the amount of protein needed for our body stands at 0.8 grams per one kilogram of body weight. Excessive protein consumption can pressurize kidneys in flushing out those excess proteins in the body. In the long run, that elimination can damage overall kidney function.

Formation of Gas Due to Fermentation: After entering the digestive system, lentils start fermenting and subsequently release gas. These gases can make matters uncomfortable and therefore, too much lentil consumption should be avoided unless you don’t mind being a bit gassy.

Rate this article
Average rating 4.1 out of 5.0 based on 471 user(s).
Read This Next:
Popular Articles