Vitamin B1 is a vital human nutrient that belongs to the vitamin B complex. It plays an important role in maintaining a healthy nervous system and improving the cardiovascular functioning of the body.

Vitamin B1 is one of the eight water-soluble vitamins in the B complex family. It helps in the conversion of carbohydrates into glucose, which in turn is used to produce energy for carrying out various bodily functions. Vitamin B1 is also required for the breakdown of fats and protein.

In addition to these health benefits, it maintains the muscle tone along the walls of the digestive tract and promotes the health of the nervous system, skin, hair, eyes, mouth, and liver. It also improves the body’s ability to withstand stress and is often called the “anti-stress” vitamin. [1]

Important Sources of Vitamin B1

The early symptoms of vitamin B1 deficiency include lethargy, irritability, loss of memory, loss of sleep or appetite, weight loss, indigestion or constipation, and calf muscle tenderness. If left untreated these initial symptoms might lead to a severe form of thiamine deficiency, known as beriberi. This condition is characterized by nerve, heart, and brain abnormalities, but the symptoms vary from person to person and depend on a number of factors. Some examples are explained below. 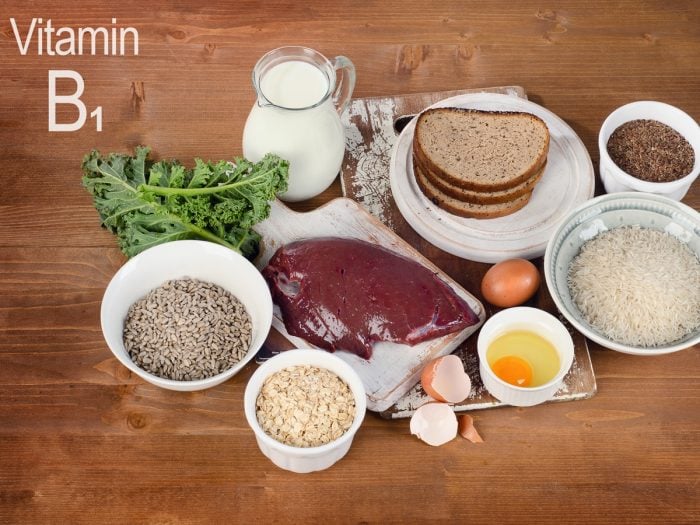 Wet Beriberi: Common symptoms include abnormally fast heartbeat, fluid retention in the legs, pulmonary edema, and hypotension, which might result in shock and even death. [2]

Brain Abnormalities: In alcoholics, thiamine deficiency might result in brain abnormalities such as Wernicke-Korsakoff syndrome. Some of its common symptoms include haziness, involuntary eye movements, difficulty in walking and partial paralysis of the eyes among other debilitating symptoms. If ignored, these symptoms could become fatal. The common symptoms of Korsakoff’s psychosis include loss of memory, incoherence, and confabulation.

Infantile Beriberi: This variety is commonly seen in newborns of women already suffering from thiamine deficiency who contract this condition from the mother’s milk. Heart failure, loss of reflexes and aphonia are some of the common symptoms, so be sure to have sufficient levels of vitamin B1 if you are pregnant.

Health Benefits of Vitamin B1

Thiamine helps in many important functions and is one of the vital nutrients in the body. Its benefits include the following;

Sugar is the principal source of energy in our body, where it is oxidized to form a usable form of energy due to the presence of vitamin B1. It is part of a complex enzyme system called the pyruvate dehydrogenase system, which helps in the oxidation of sugar. It is also required for the functioning of this enzyme system, which releases energy for a variety of functions in the body.

Vitamin B1 helps in the proper development of myelin sheaths around nerves. A deficiency of this vitamin may result in the degeneration of these coverings, which can result in nerve damage and death.

This vitamin helps in the production of the neurotransmitter acetylcholine, which is used to relay messages between the nerves and muscles and to ensure proper cardiac function. Vitamin B1 deficiency can, therefore, result in irregular cardiac functions. When given vitamin B1 intravenously for seven days, people suffering from congestive heart failure showed considerable improvements in their echocardiograms, and this proves that it can prevent heart disease.

When used along with other essential nutrients, vitamin B1 can delay or prevent the occurrence of cataracts.

Vitamin B1 works as a powerful antioxidant, which helps protect your body from the signs of aging like wrinkles, age spots, and other age-related conditions that regularly affect the organs.

This vitamin also helps in the secretion of hydrochloric acid, which is essential for the complete digestion of food particles.

Vitamin B1 is known to slow down the progression of Alzheimer’s disease. According to Gary E. Gibson et al., there are several similarities between thiamine deficiency and Alzheimer’s as both are linked to cognitive problems and a reduction in brain glucose metabolism. When treated with vitamin B1 supplements of 100 mg per day, patients with this disease felt relief. There are placebo-controlled trial studies currently ongoing to determine more about the mechanism by which this occurs. [3]

Vitamin B1 can improve your memory and concentration power. It is also used in the management of many nervous disorders such as multiple sclerosis and Bell’s palsy. It is better known as a “morale vitamin” for its positive impact on the nervous system and a healthy mental attitude.

May Stimulate Production of RBC

Vitamin B1 plays an important role in the production of red blood cells (RBCs), which keep people healthy, active, and energized.

May Relieve Effects of Alcoholism

Vitamin B1 can fend off the deficiencies caused by cirrhosis, infections, hyperthyroidism, and the other effects of alcoholism. [4]

This vitamin can significantly improve appetite and mental alertness.

Note: Vitamin B1 is a water-soluble vitamin and is expelled through urine. Therefore, make sure to maintain a well-balanced diet that can resupply the necessary amounts of vitamin B1 regularly.

Rate this article
Average rating 3.9 out of 5.0 based on 479 user(s).
Read This Next:
Popular Articles