What is Atropa Belladonna?

One of the most famous and most deadly plants in the world is Atropa belladonna, or what is more commonly known as simply belladonna or deadly nightshade. This perennial herbaceous plant has a long and legendary history, both in its traditional uses, and in literary, historical, and popular culture. The specific alkaloids found in the berries and leaves is extremely toxic, and can cause hallucinations, illness, confusion, hysteria, and even death. At this point, you may be wondering why the title of this article is “Health Benefits” of Atropa belladonna, but even in ancient times, when prepared and handled properly, the belladonna plant did have some valuable side effects that could be considered “beneficial” for human health. [1]

Tinctures, decoctions, and powders derived from the belladonna plant have been in use for centuries, but due to the extreme toxicity of the plant, it is always recommended that you consult a herbalist or a medical professional before pursuing this ancient remedy. The other use of belladonna has been as a recreational drug, but the ease with which one can overdose, and the severe, often permanently altering hallucinations have made this a very unpopular choice. All of that being said, the potent chemicals and organic compounds found within Atropa belladonna make it quite appealing due to its effects on the body, when it’s prepared safely and correctly. Now, let’s take a closer look at the health benefits of Atropa belladonna. [2] 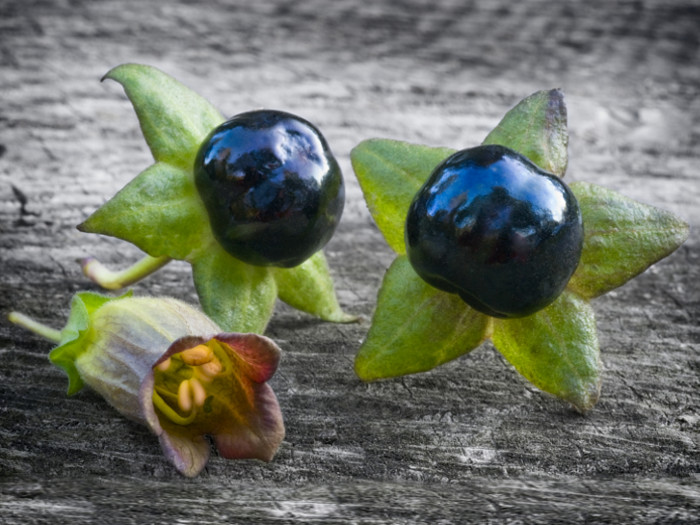 Although consuming deadly nightshade may not sound like the most pleasant experience, belladonna has been known to cut down on mucus production in the sinuses, and can also clear out the respiratory tracts of excess phlegm. This helps to reduce respiratory illnesses, as many of the bacteria that get stuck in that phlegm and mucus cause those conditions. [3]

The number of people suffering from Irritable Bowel Syndrome and other gastrointestinal issues seems to be growing, but belladonna tinctures have been shown to significantly soothe the stomach and reduce the cramping and discomfort that IBS often causes in so many people. This effect is partially due to the anti-inflammatory and sedative properties of the plant, which not only make them beneficial, but also deadly in too large of a quantity. [4]

When you suffer from an affliction of the nervous system, it can often be an uncontrollable and embarrassing process where you truly feel that there is nothing you can do. Spasms, muscular issues, and general functional can decrease. Fortunately, as an antispasmodic and sedative substance, nightshade has been known to soothe the nervous system and relieve the symptoms from major nervous system disorders and diseases. [5]

Whether in topical application or when orally consumed (in small, measured quantities), Atropa belladonna can significantly reduce pain and acts as a powerful analgesic. This use of belladonna may be one of the oldest known applications, with the exception of making poison-tipped arrows, of course. Whether you’ve strained a muscle during an athletic ability or suffer chronic pain somewhere else in the body, belladonna can help. [6]

When applied to the temples, a bit of the belladonna tincture can quickly alleviate headaches and migraines. The powerful compounds should be kept away from the eyes and mouth, however, particularly when used in a concentrated form as a topical solution. [7]

The sedative nature of belladonna does tend to make it quite effective for reducing strain, stress, and anxiety in people suffering from chronic cases. It can also work to improve mood and alleviate feelings of depression. While this can be a slightly dangerous herbal additive if you are already taking sedatives or anti-depressants, belladonna is connected with releasing certain pleasure hormones, like dopamine, which can induce this feeling of mental peace. [8]

Following the previous benefit, it makes sense that Atropa belladonna has also been turned to throughout history to improve quality of sleep. Using too much may give you the Big sleep, but in appropriate doses, you can remedy insomnia and restlessness problems, which are all too common in today’s fast-paced world. [9]

Before and after menstruation and menopause, the hormone levels in a woman’s body can fluctuate dramatically, causing a number of physical and psychological changes. Throughout history, Atropa belladonna has been recommended for treating the symptoms of these two feminine issues, particularly hot flashes, cramping, mood swings, and cravings. [10]

Some of the antispasmodic benefits were explained earlier, but another important effect of this particular quality of Atropa belladonna is its prevention of muscle spasms, which protects the entire body, including the heart (irregularities) and the bowels (digestion). [11]

Studies have shown that Atropa belladonna’s effects on the respiratory system also make it an effective remedy for certain allergic reactions, particularly hay fever. By reducing spasms and clearing out the sinuses, deadly nightshade might be just the thing to get rid of those sneezing attacks come spring! [12]

Throughout this article, there have been a dozen warnings…Atropa belladonna is extremely toxic, and under no circumstances should the berries or leaves be used without proper preparation and handling. This plant can cause everything from hallucinations and confusion to insanity and death. While the benefits are clear, those are only possible through careful consultation with a local professional who deals in this delicate and meticulous area of herbal study.

Rate this article
Average rating 4.0 out of 5.0 based on 56 user(s).
Popular Articles