Banana tea may sound like a combination of two unrelated culinary items, but it is surprisingly delicious. It has recently acquired popularity as a sleeping aid. Many people believe that banana tea, taken at bedtime, can help soothe nerves and promote sleep. It is packed with other benefits, such as improving one’s mood, benefiting heart health, and managing weight loss.

Often made along with the peel, the banana peel tea is even more potent. It uses the nutrient-rich peels of the banana, thereby making it more powerful and reducing waste. Let’s learn more about how it can help you sleep better, how to make it, and other benefits.

What is Banana Tea?

Banana tea is made from the banana fruit, which is native to Australia and areas of the South Pacific. The most common species are Musa balbisiana and Musa acuminata, and these are produced around the globe, most notably in the Caribbean, as well as Central and South America.

Banana tea is made using either a peeled banana or with the peel. In a banana peel tea, the peel is left on while brewing this unique drink. Banana peels are typically discarded as trash, but they actually contain a dense concentration of nutrients including potassium and dietary fiber. While it seems unlikely that people will begin eating whole bananas anytime soon, peel included, banana peel tea is beginning to gain popularity. Most of the health benefits are due to the pectin, vitamin B6, vitamin B12, vitamin C, potassium, manganese, and magnesium, among others. 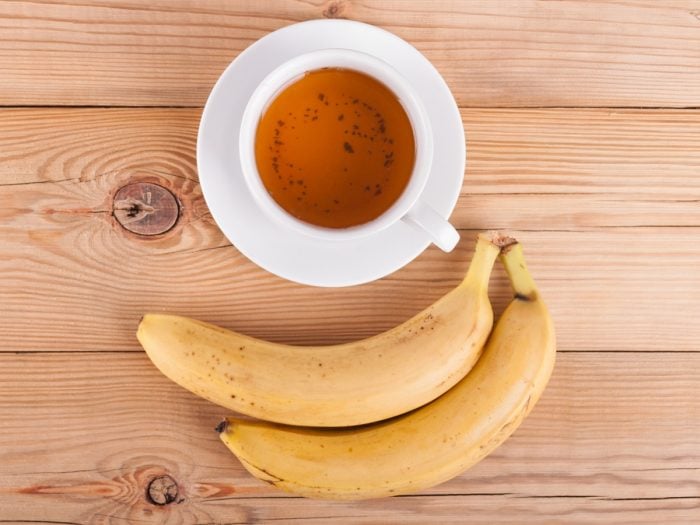 A cup of banana tea can improve your sleep. Photo Credit: Shutterstock

The high levels of tryptophan, serotonin, and dopamine in banana tea have been linked to improved sleep levels, a reduced occurrence of insomnia, and generally more restful and uninterrupted sleep. These chemicals are not found in high concentrations within the fruit itself, but they are definitely present in the peel. The longer you steep the entire banana peel and fruit – the more of these nutrients will be infused into the drink.

By enjoying a cup of banana peel tea before going to bed, you may lower your stress hormones and induce healthy, restful, and undisturbed sleep. Although research directly linking the two is lacking, one study found that functional foods could help in improving sleep. Banana contains many such elements, including potassium and tryptophan.

Read more about such teas in our article on 7 Best Teas For A Good Night’s Sleep.

Banana tea is perhaps most well known for its potassium content, which promotes heart health and can lower your blood pressure. As a vasodilator, potassium not only regulates fluid balance in the body but also reduces strain on the cardiovascular system by easing tension in arteries and blood vessels.

The dopamine and serotonin found in banana tea also help regulate hormone levels and boost mood, since they are the feel-good neurotransmitters. Adding banana tea to your diet might be an effective natural, healthy remedy for boosting your mood.

There is a good variety of minerals in banana tea including manganese and magnesium, both of which contribute to improving bone mineral density. Adequate intake of these essential vitamins and minerals from banana tea and other foods in a balanced diet can help slow or completely prevent osteoporosis as we age.

Potassium and magnesium are both known to optimize smooth muscle function, which is important in the digestive tract. This can help stimulate peristaltic motion, which regulates bowel movements, thereby preventing constipation, bloating, and cramping, while also improving nutrient uptake.

Explore more options with our pick of 7 Amazing Teas for Digestion. 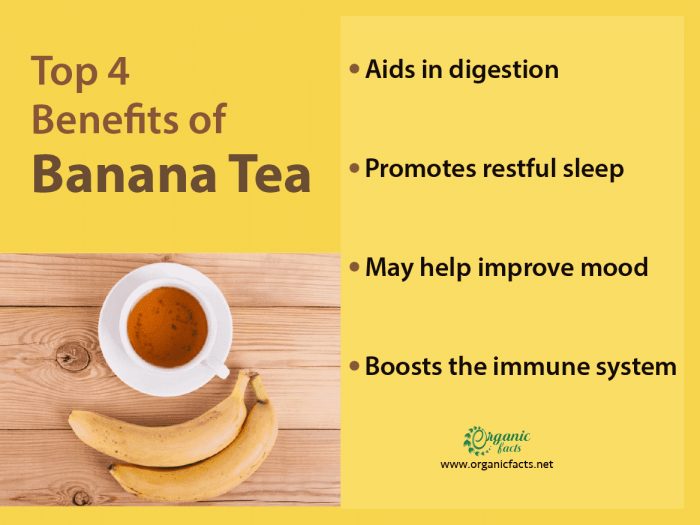 Banana tea is made using either a peeled banana or with the peel.

Vitamin C and vitamin A, both present in bananas, help boost the immune system. Both of these vitamins act as antioxidants. Ascorbic acid (vitamin C) stimulates the production of white blood cells, vitamin A is directly linked to preventing oxidative stress in the retina, macular degeneration, and the development of cataracts.

Contrary to popular belief, banana is actually good for weight control. Bananas are rich in soluble and insoluble fiber, these two types of fiber are known to slow digestion, suppress appetite, boost metabolism. It can keep you feeling satiated, thanks to the tryptophan, dopamine, and serotonin they contain. According to an article in Penn Medicine, a balanced diet is the key to maintaining weight loss in the long-term. Incorporating banana’s natural sugars, fibers, and other nutritional benefits can be very useful in planning such a diet.

For other such teas, read our article on 9 Best Teas for Weight Loss.

How to Make Banana Tea?

You can make banana tea very easily at home. All you need is an organic banana, hot water, and a sweetener like honey or cinnamon.

You always want to use organic bananas as there won't be pesticide residue on the peel. While this pesticide isn't deadly, it can result in some toxicity within the body, so it is best if you avoid that possibility.  You can also use cinnamon powder instead of a cinnamon stick. Add 1/4 teaspoon of cinnamon powder after the banana tea is brewed.

Banana peel tea is a great way of practicing zero waste while drawing health benefits such as restful sleep and detoxification. Try this 3-step banana peel recipe for a fragrant beverage just before bedtime! 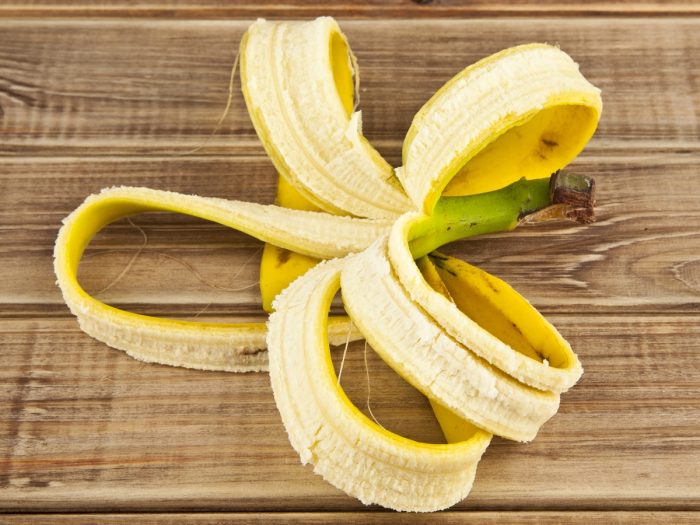 Green bananas are a better choice than fully ripened ones. Green banana peels possess higher levels of probiotics as well as resistant starch that can't be quickly digested by the body. This further stimulates fat-burning activity and weight loss.

Side Effects of Banana Tea

The side effects of drinking banana tea include nausea, vomiting, upset stomach, and hyperkalemia (high potassium). These negative effects are generally experienced only when people consume too much of banana tea or if the bananas used to brew the tea are not organically grown. One to two cups of tea daily should be within a reasonable limit for most people.