Pine Needle Tea: How To Make It & Benefits

The best benefits of pine needle tea include maximizing the immune system, improving vision, preventing respiratory infections, stimulating circulation, avoiding chronic disease, increasing cognitive performance, strengthening heart health, and speeding healing. With more than a hundred varieties of pine trees in North America alone, you must use the correct pine needles, as some varieties may contain toxins or cause negative side effects.

What is Pine Needle Tea?

Pine needle tea has been considered an important medicinal tool for indigenous cultures for thousands of years. While formal research is somewhat limited on the subject, the anecdotal evidence of its benefits is undeniable. Pine trees are native to the Northern Hemisphere but are now found across the world, from cold to subtropical regions. Pine needle tea is consumed in the US and many Asian cultures.

How To Choose Pine Needles For Tea?

It is usually made with the fresh leaves of the pine tree. You can also buy pre-packed pine tree needles for a quick brew. The tea has a woodsy fragrance with a pleasant citrusy flavor.

There are also quite a few trees that are commonly called “pine trees”, but are in fact toxic imitators, such as the English Yew, Norfolk island pine, and the Yew pine. These should never be used to brew pine needle tea. Experts recommend using eastern white pine and noble fir as safe to drink.

How To Make Pine Needle Tea?

Let us look at the step-by-step method to make pine needle tea. 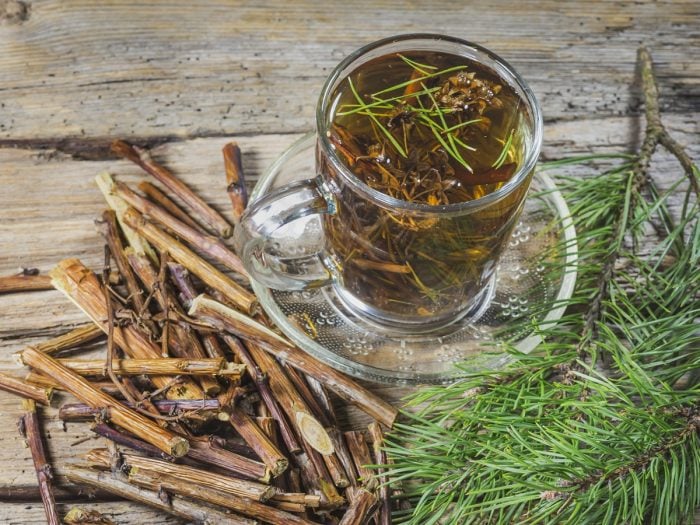 Make sure the pine needles have a vibrant green color. Avoid yellow or brown ones. Fresh pine needles are more flexible than older ones and are preferable for tea.

There are very few long-term or clinical researches on the health benefits of pine needle tea. But there is a long tradition of its usage in Native American and Asian cultures. We can find its mention in memoirs, encyclopedias, and folklore. Here are some of its top health benefits:

May be rich in vitamin C: Although there is no research to support it, pine needle tea is believed to contain 4-5 times more vitamin C than orange juice. It was the traditional remedy for scurvy, which is caused by vitamin C deficiency. The Encyclopedia of Folk Medicine describes how Native Americans used pine needle tea to treat scurvy among the colonists. A Korean study found that the antioxidant activity of pine needle tea was indeed similar to that of vitamin C.

Vision health: Pine needle tea is also believed to contain vitamin A. Together with vitamin C, it can improve our vision. Vitamin C is good for aging eyes, giving it antioxidant protection against normal pollutants. Vitamin A is essential for our cornea and in improving vision.

Respiratory Conditions: Pine needle tea was often used by indigenous cultures for treating respiratory problems. The Encyclopedia of American Indian Contributions to the World records how the Native Americans used white pine for its expectorant and decongestant qualities.

May Aid Weight Loss: Pine needle tea shows some of the same potentials as green and black tea. Research shows that it may help in weight loss. A Korean study on rats and overweight humans found that pine needle extract along with green and black tea reduced body weight gain and visceral fat mass.

Rich in Antioxidants: Pine needle tea could be a very rich source of antioxidants, essential for fighting free radicals, chronic conditions, and preventing diseases. According to research published in the journal Food and Chemical Toxicology, a water extract from pine needles showed a high level of antioxidants and DNA-protective properties.

Heart health: Pine needle tea may be good for your heart. Research has shown that it protects against LDL oxidation, a condition that can threaten your cardiovascular health. It has strong anti-inflammatory properties which further help in minimizing any damage on your heart due to pollutants or other factors.

Cognitive Function: Early studies on the effect of this potent tea on neurodegenerative diseases have shown promising results. An animal study showed that it can be very effective against memory impairment or amnesia. The antioxidants in this tea can help repair neural connections and improve memory.

There are a wide variety of pine trees. Some of these are potentially toxic or harmful when used for food. If you are foraging for pine needles, it is advisable to do so with an expert. According to the USDA Agricultural Research Service, the needles of ponderosa pine cause abortion when grazed by cattle. With very little research available, most of the side effects of pine-needle tea are also anecdotal. Some of these are:

For pregnant women: The USDA cautioned against the ingestion of ponderosa pine needles. Given the toxicity of some pine species, it is best to avoid drinking this tea if you are pregnant.

Allergy: You should also be aware of any potential allergies to pine trees. Pine oil that is released when brewing the tea, can have inflammatory effects on the skin and stomach, resulting in stomach upset in some people. Given these possible side-effects, it is recommended that you only try about half a cup in the beginning.

Rate this article
Average rating 4.2 out of 5.0 based on 162 user(s).
Read This Next:
Popular Articles