The health benefits of iron mainly include providing life-giving oxygen to organ systems through its role in red blood cell production. About two-thirds of the body’s iron is found in hemoglobin. Other health benefits include prevention and reduction of anemia (during pregnancy as well), chronic diseases, cough, pre-dialysis anemia, and many others. [1]

What is the Importance of Iron?

The health benefits of iron relate to the proper growth of the human body and the maintenance of robust health. It is an essential protein component for metabolism, and the human body needs it to produce red blood cells. The human body is capable of preserving up to 25% of it for future use, especially in the cases of inadequate diet intake, which is a backup for reducing the impact of anemia, if its intake suddenly declines.

In our body, about 70% of iron is found in hemoglobin and myoglobin. Hemoglobin is the primary transporter of oxygen from the lungs to the body’s tissues, while myoglobin is in muscle cells, and makes acceptance, storage, transportation, and release of oxygen possible in them. About 5% of it is found as components of various proteins and as necessary elements in certain enzymatic reactions. [2]

Finally, up to 25% of the body’s iron is stored in ferritin, which is present in the cells. Ferritin can store up to three years’ worth of iron supplementation for men, but only about one year’s worth for women, which is why anemia is more common in females. The role and importance of this mineral cannot be underestimated, primarily because its deficiency is unpleasant and dangerous.

Iron deficiency may often cause severe fatigue, body weakness, and other health ailments. People lacking it cannot perform normal functions in an optimal way. Furthermore, women and children need more iron than men, and anemia strikes them particularly hard. Severe deficiency may cause progressive skin ailments that cause brittleness of nails and extra smoothness in the tongue area. The enzymatic processes that require iron and protein will not occur and the body metabolism can slow or even shut down. Anemia is considered the most common global nutritional deficiency. [3] 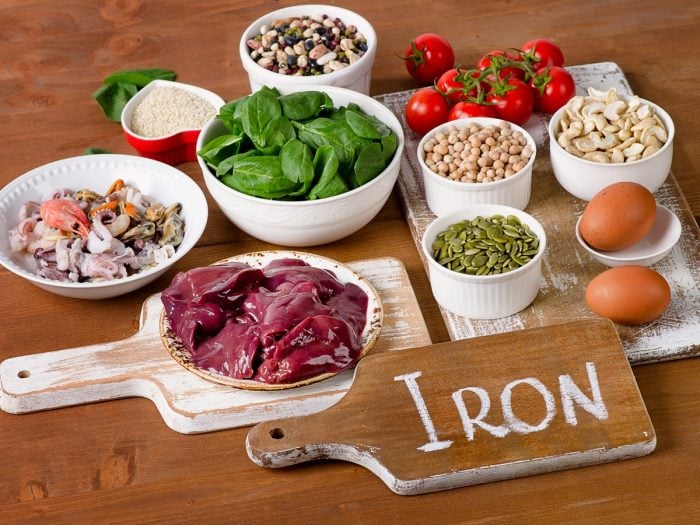 Adding iron rich foods to your diet can give you a big energy boost. Photo Credit: Shutterstock

Iron is found in both vegetarian and non-vegetarian foods, which is classified as heme or non-heme respectively. Legumes, lentils, soybeans, whole grains, green leafy vegetables, cereals, bread, spinach, turnip, sprouts, broccoli, and dry fruits also have good iron content. You can also get it from its tablets and supplements, which anemic patients are often advised to take by their doctors. Food items containing good levels of vitamin C may also aid in the absorption of iron by the body. For example, eating a burger with tomato slices on it could boost the absorption of non-heme iron contents from the burger bread. Citrus fruits and juices like orange juice may also help in its absorption. [4] [5]

Iron, when consumed in a balanced amount in the human diet, is perfect for providing a number of benefits, which are explained in greater detail below.

Formation of hemoglobin is the chief function of this mineral. Not only that, since it is a part of hemoglobin, it aids in transporting oxygen to the body cells as wells. Additional hemoglobin is vitally important because human beings tend to lose blood in various ways, through injuries, both internal and external. Most notably, women lose considerable amounts of blood every month during their menstruation years, which is one of the major reasons why women are more likely to suffer from anemia than men.
[6] [7]

It is a vital element for muscle health. It is present in the muscle tissues and helps provide the supply of oxygen required for the contraction of muscles. Without it, muscles lose their tone and elasticity; muscle weakness is one of the most obvious signs of anemia. [8]

Increased development of the brain is also one of the many benefits of iron. Since oxygen supply in the blood is aided by iron and the brain uses approximately 20% of the blood oxygen, it is directly related to brain health and its functions. Proper flow of blood in the brain can stimulate cognitive activity and help create new neural pathways to prevent cognitive disorders, so iron intake and its subsequent brain oxygenation is essential. [9]

Iron deficiency is one of the causes of restless leg syndrome. Low level of it in the blood is a major cause of the condition, so proper intake of its supplements in required levels as per the doctor’s recommendations can help with this problem. This is connected to muscle spasms, which can be one of the symptoms of its deficiency. [10]

Iron is an important facilitator for regulating body temperature. An interesting fact is that it has the ability to regulate itself as per the absorption capacity of the body. Keeping the body temperature stable means that the enzymatic and metabolic functions can happen in their most optimal and efficient environment and temperatures. [11]

One of the most important health benefits of iron is that it acts as a carrier of oxygen and thus participates in transferring oxygen from one cell to another. This is a vital function of iron, as oxygen is required by each and every organ system to perform routine functions. [12]

Iron is helpful in the treatment of a severe disorder called iron deficiency anemia, which results from a lack of it in the human body. This is where most of these health benefits come from, as a result of preventing this terrible disease that affects millions of people around the world. Anemia is the most common nutritional deficiency on the planet. [13]

Iron also helps against chronic disorders like renal failure anemia and other chronic diseases of the intestinal and excretory system. These are not related to blood necessarily, like most other iron functions, but it is still a key part of many necessary processes throughout the body’s systems, not just the circulatory system. [14]

Iron may also exhibit its health benefits in curing anemia that occurs in women during pregnancy or menstruation. New red blood cells must replace those that have been lost, so consuming significant amounts of it is necessary for women at those points in their lives. [15]

It actively takes part in the synthesis of a number of essential neurotransmitters like dopamine, norepinephrine, and serotonin. These chemicals play a major role in different activities involving neurons and the human brain. [16]

It is suggested by health experts that iron is capable of reduces another form of anemia called predialysis anemia. However, it is a good idea to consult a medical expert as it can be very complicated and dangerous. [17]

Health benefits of iron also include the elimination of unexplained or chronic fatigue, which may occur in both men and women. Its deficiency is a natural cause of fatigue since it is an important component of hemoglobin. [18]

Iron plays a key role in providing strength to the immune system. Thus, the body is made proficient enough to fight against a number of diseases and infections. Red blood cells are necessary for providing oxygen to damaged tissues, organs, and cells. Without it, there would be no hemoglobin; without hemoglobin, there would be no oxygen. The healing process needs this essential nutrient to happen.

It is an important participant in energy metabolism in the human body. This process is how energy is extracted from the consumed food and subsequently distributed to different body parts. [19]

It is useful in reducing insomnia symptoms and it improves the sleeping habits of people by regulating their circadian rhythms. Proper red blood cell count can also result in less fluctuation of blood pressure, which can often keep people awake at night. [21]

Iron, when consumed in sufficient amounts, can help improve concentration and boost cognitive performance. An increased flow of blood to the brain is what results in this important benefit. [22]

Rate this article
Average rating 4.0 out of 5.0 based on 465 user(s).
Read This Next:
Popular Articles