Benefits & Side Effects of Chili Oil

The impressive benefits of chili oil include protecting the skin, boosting cognition, relieving pain, soothing inflammation, preventing chronic disease, strengthen the immune system, increase heart health, aid vision health, help with weight loss and relieve sinus congestion. There are some notable side effects of chili oil that should also be considered, such as stomach upset, skin irritation and nerve-tingling. When used responsibly, and when prepared properly, chili oil is considered harmless for most people, albeit powerful for their overall health!

What is Chili Oil?

Chili oil is a popular preparation of vegetable oil that has been infused with chili peppers. Chili peppers are the (typically dried) fruit from plants in the Capsicum genus, and while these peppers originated in Mexico, this oil is now available globally, and various cultivars of chili peppers are grown in countries all around the world. Although most commonly used in culinary applications, often in Asian countries and cuisine, chili oil can also be used for a vast array of medical conditions, due to its potent antioxidant and anti-inflammatory effects. Chili peppers are rich in the active ingredient capsaicin, which can have a profound impact on the body. Furthermore, this oil has trace levels of vitamin C and vitamin A, as well as certain key antioxidants and beneficial fatty acids.  [1]

The potential antioxidant capacity of chili oil is rather incredible, due to the high concentration of capsaicin, an antioxidant compound that provides the majority of health benefits in chili peppers. This antioxidant, along with various other related compounds, can seek out and neutralize free radicals anywhere in the body, which can lower oxidative stress and lower your risk of developing chronic disease. [2]

Capsaicin is also able to stimulate the immune system, and chili oil is known to have moderate levels of vitamin C. This can help to boost production of white blood cells, while also working as an antioxidant to relieve strain on the immune system. If you have a cough, cold, or congestion, a small dose of chili oil can help speed recovery. 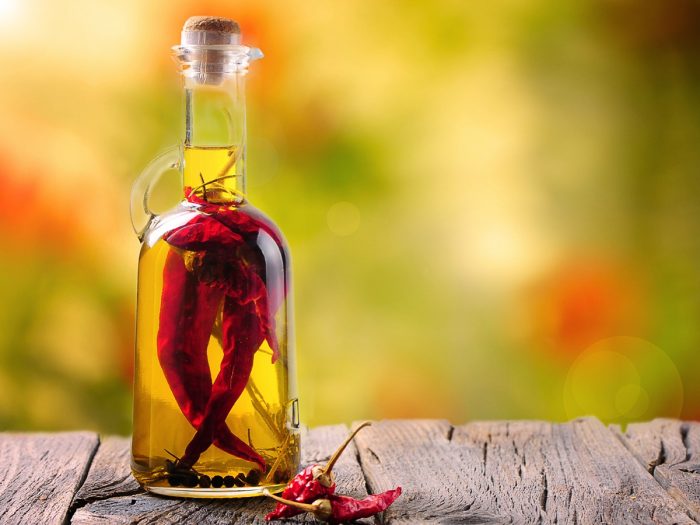 Homemade chili oil is great for drizzling over foods to give a spicy flavor. Photo Credit: Shutterstock

The potentially anti-inflammatory compounds found in this oil help it soothe upset stomachs and eliminate inflamed tissues in the gut. While many people think of spicy food as being bad for digestion, the capsaicin and other compounds in this oil can actually improve those conditions, stimulating digestion and balancing the bacterial environment of the gut. [3]

When you are stuffed up as a result of allergies or a cold, unblocking your sinuses is absolutely critical. Sometimes inhaling the aroma of chili oil may be enough to clear your sinuses, or you can simply consume a small amount, or even rub some on the skin beneath your nose. Even the aromatic compounds of this oil have expectorant and decongestant properties!  [4]

Although not found in huge amounts, chili oil does offer some vitamin A, which can provide a major boost to vision health. Vitamin A acts as an antioxidant and can prevent macular degeneration and dry eyes, as well as slow the development of cataracts as you age.

As a topical pain reliever, few things are better than chili oil, and in fact, capsaicin is popularly used in pharmaceutical analgesics. The powerful anti-inflammatory properties can quickly eliminate swelling and pain, whether the discomfort is chronic or acute in nature.  [5]

Numerous studies have linked capsaicin to improved cognitive levels, due to its antioxidant activity. Found in high levels within chili oil, capsaicin can reduce the amount of beta-amyloid plaque deposition, which can help to slow down or even reverse the symptoms of dementia and other neurodegenerative diseases.  [6]

While putting spicy chili oil on the skin may not sound like the best idea for irritation or itching, the anti-inflammatory effects of this oil are undeniable. If you are suffering from everything from eczema and bug bites to psoriasis, allergic reactions or hives, applying a small amount of chili oil can quickly relieve the discomfort. [7]

Recent studies have shown that capsaicin can stimulate circulation and also increase levels of HDL cholesterol, which the body needs to function properly. This can help to lower blood pressure and prevent strain on the cardiovascular system. [8]

The nutritional value of chili oil consists primarily of its active ingredient, capsaicin, although the oil also contains other related compounds, known as capsaicinoids, which have similar antioxidant effects on the body. Depending on the preparation method, some chili oil also contains small to moderate amounts of vitamin C, vitamin D, vitamin A, and folic acid. The oil that you may infuse with chili peppers will also give particular health attributes to the oil, such as varying levels of polyunsaturated, monounsaturated, and saturated fats. Chili oil also has a low level of calories, provided you don’t use vegetable oil that is high in calories, such as soybean oil. Olive oil, for example, only has about 40 calories per tablespoon.

Rate this article
Average rating 3.6 out of 5.0 based on 45 user(s).
Read This Next:
Popular Articles