The health benefits of capsicum may include relief from stomach issues, back pain, muscle spasms, headaches, skin aging, peptic ulcers, menopausal problems, lower risk of cardiovascular diseases, and diabetes management. It might have anti-inflammatory and analgesic properties, and may also provide relief from pain related to arthritis. They can be an excellent source of vitamins A and C, among other nutrients.

The terminology ‘capsicum’ can be confusing as it can be used to describe both, the fruits and the plants, of the Capsicum genus. So let’s make it simple. The word capsicum can mean: 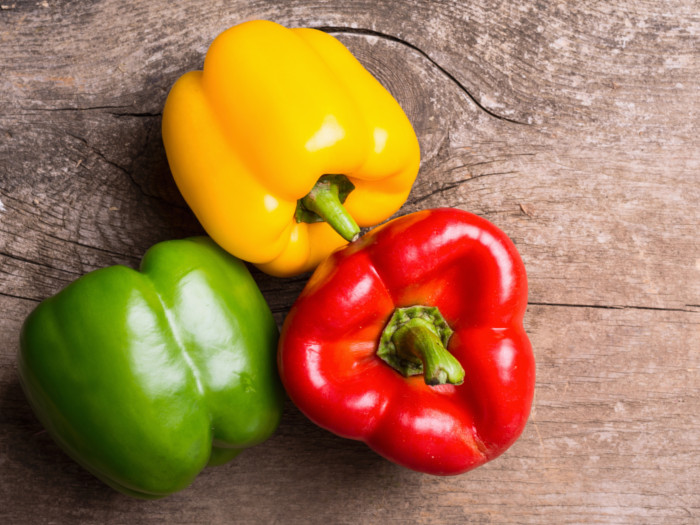 Some of the most popular Capsicum species are:

Many people are familiar with the use of chili peppers in the preparation of spicy meals. What is it that makes the chili pepper spicy, though? the answer is – capsaicin, a water-insoluble derivative of homovanillic acid, and also the major active ingredient in capsicum is responsible for the hot and burning sensation to the tongue. [5]

With the varieties of chili peppers available, it is important to know that the capsaicin content of each type of chili pepper varies. This natural fruit may be used fresh or dried as a culinary spice, added to teas, or taken in capsules to reap its medicinal benefits. [6]

Capsicum comes in dried form, as a spice as chili pepper and paprika. The dried spice can be used in many sauces or can be added to beverages, such as tea. The dried variety is available as whole dried peppers, as a single spice, or in dried spice blends.

With chili’s ready availability in many markets, it should be considered that though the dried spice is convenient and might be effective in its health benefits, eating it fresh may provide more benefits.

Additionally, it might have been used in traditional medicine for the treatment of cough, toothache, sore throat, parasitic infections, and wound healing.

Using whole chili peppers from the Capsicum genus may provide nutritional value, including the possibility of high amounts of vitamin C and vitamin A. These vitamins can be obtained from the fresh fruit. The chili, harvested when red rather than orange or yellow, might have higher concentrations of these beneficial nutrients. Another beneficial bioactive components of the chili are the content of flavonoids. Alkaloids and tannins are some of the other important bioactive compounds contained in them. Alkaloids might work as anti-inflammatory, analgesic, and antioxidant agents. [9] [10]

Adding capsicum to your daily diet may provide health benefits against many ailments. Let us look at the benefits in detail.

The phytochemical constituents of capsicum might produce an anti-inflammatory response. Another example of peripheral neurogenic inflammation in cutaneous pain of the skin. Its creams and balms are often massaged topically onto the skin with care taken to avoid open areas and mucous membranes. The burning effect of this vegetable is felt when applied to the skin, which might be caused by an inflammatory response of the peripheral nerve endings. [11]

Capsicum may contain tannins. Tannins are astringent and can be considered for the possible benefits when treating gastrointestinal issues such as diarrhea, dysentery, and other microbial disorders. Gastric mucilage may protect the gastric lining and may prevent related diseases. Studies suggest that it might act as a mucilage by increasing the production of gastric mucus and can help treat peptic ulcer disease. [12]

Studies on flavonoids have suggested that they may be beneficial towards preventing coronary heart disease. A 2017 research report published in the PLOS One journal found that people who regularly eat hot red chili peppers had a lower mortality risk (almost 13 percent), compared to those who did not. This was mainly due to the possible preventive effect of obesity and cardiovascular diseases. [13] [14]

Can be an Antioxidant Agent

Many of the bioactive compounds of capsicum may provide antioxidant effects. Improved vasodilatation might allow for these antioxidant phytochemicals to circulate throughout the body. This may allow it to protect and repair tissues and DNA damage. [15]

Capsicum, like other chilies, may be a source of capsaicin. It is known to possibly have a positive effect on obesity and diabetes. A 2017 animal study showed some of the possible antidiabetic properties obtained from this plant, however, more than one component of this vegetable could have been the cause of the lower glucose levels in cases of type 1 diabetes. Another study also recommends the screening of capsicum as a part of the dietary management of type 2 diabetes and associated comorbidities. [16] [17] 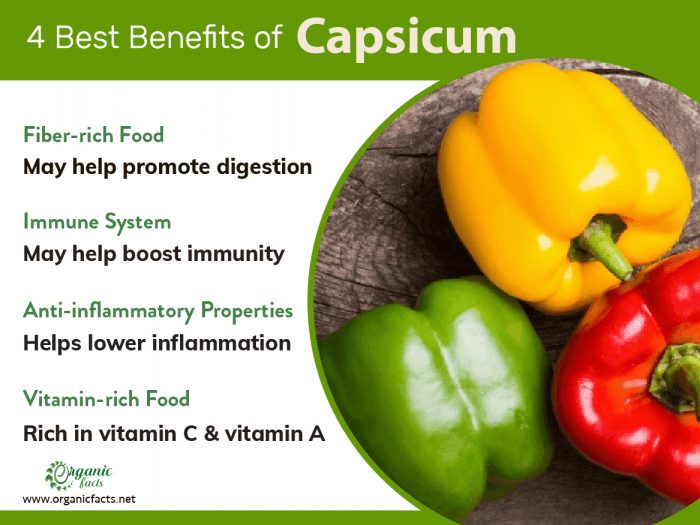 Capsicum comes in dried form, as a spice as chili pepper and paprika.

Capsicum may contain vitamin C, which is valued as immune-supportive bioactive phytochemicals. It might help in strengthening the immune system, repairing damaged tissues, and lowering the risk of oxidative stress. Research also reveals that different capsicum species may have antimicrobial properties – the extracts are effective against Helicobacter pylori and Listeria monocytogenes. [18] [19]

Vitamins in chili peppers are shown to have a possible antioxidant effect on cell tissues, which may improve skin health and prevent aging. As mentioned, be sure to avoid contact with eyes or other exposed mucous membranes.
[20]

It is thought in folk medicine that menopausal symptoms may be relieved by the consumption of flavonoid-containing fruits such as chili. While there isn’t much research surrounding this, it anecdotally works for some women.

Word of caution: It is beneficial to avoid touching the eyes or bodily mucous membranes during the preparation of peppers. Also, wash your hands thoroughly after preparation to avoid transferring volatile oils containing capsicum to these sensitive areas.

Rate this article
Average rating 4.0 out of 5.0 based on 291 user(s).
Read This Next:
Popular Articles