The health benefits of peanut oil may include skincare, lower cholesterol levels, improved heart health, and the nervous system. It may also help reduce the risk of cancer, boosts cognitive function, strengthens the immune system, and lowers blood pressure.

What is Peanut Oil?

Peanut oil, also known by other names such as groundnut oil and Arachis oil, is a type of vegetable oil commonly used in cooking that is derived from peanuts. It comes in a number of varieties, including refined, unrefined, roasted, and cold-pressed, which have slight differences in their nutritional value and health benefits. Generally, people use peanut oil in their cooking for the interesting flavor that it gives, particularly the roasted variety, as well as the fact that it is healthier than many types of oil. [1]

Peanut oil is most commonly used in Asian cultures, including that of China and Southeast Asian nations like Vietnam, Laos, and Cambodia.

Most of the health benefits of peanut oil come from its diverse types of fatty acids, such as oleic acid, stearic acid, palmitic acid, and linoleic acid, among others. While unbalanced levels of fatty acids can be dangerous for your health, peanut oil has a very safe balance that can boost your health in a variety of ways, in addition to the health benefits from the other vitamins, minerals, and organic compounds found in peanuts. [2] [3]

Peanut consumption globally varies in huge proportions, hence the commercial products are variant and generally found locally. Peanuts have developed into a variety of products like peanut butter, roasted peanuts, peanut oil, peanut sauce, peanut jam, peanut milk, peanut flour, peanut snacks (sweet and salted bars), and peanut cheese analog. Raw peanuts consumption takes place all around the world. Peanut oil, as with other vegetable oils, is used to make soap by the saponification process. This oil is also effective as a back massage oil. 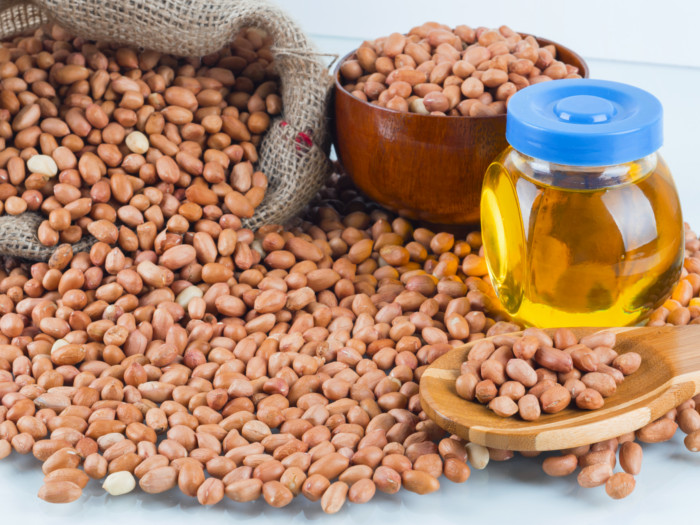 According to the USDA, peanut oil contains 120 calories per tablespoon (14 grams). It also contains monounsaturated and polyunsaturated fats which are the ‘good’ kind of fats and lower the risk of diseases. It also includes some amount of saturated fats that are best consumed in moderation.

Peanut oil is considered appropriate for deep frying as well as stir-frying, roasting, as well as baking. According to the comparisons with other oils made by Iowa State University, the healthy fat content of this oil is comparable to canola and sesame oil and is better than animal fat or palm oil.

Let’s take a closer look at some of the impressive health benefits of this delicious cooking oil.

Peanut oil is cholesterol-free, which is known to be one of the major factors contributing to complicated heart conditions such as atherosclerosis. Since cooking oil is used in many different ways, eliminating this dangerous cholesterol from your body can help prevent a variety of health complications. Furthermore, not only does peanut oil lack cholesterol, it can reduce your current levels of cholesterol due to the presence of plant sterols. These phytosterols actually compete for cholesterol absorption in the stomach and gut, which can lower your cholesterol levels by 10-15%!
[5]

Peanut oil also contains monounsaturated fatty acids, like oleic acid, which increases the levels of “good cholesterol”, called HDL, in the blood. This beneficial cholesterol may actually help to scrape off and reduce bad cholesterol (LDL) and lower your risk of developing coronary heart diseases and strokes. [6]

There has been a lot of debate on the potential of nutritional components of nuts in cancer prevention. In a 2016 report published in the Journal of Food Science and Technology, studies suggest that unsaturated fats and bioactive compounds in peanuts may have cancer-preventive effects. Research led by Awad AB et al. showed that peanut oil contained phytosterols and in particular beta-sitosterol, which may have the ability to protect the body from colon, prostate, and breast cancer. Another detailed study titled “Anticancer effects of phytosterols” suggests that these natural plant compounds have the ability to inhibit carcinogen production and cancer-cell growth (Woyengo TA et al., 2009). Consumption of phytosterols may also be positively linked to increased activity of antioxidant enzymes and reduced oxidative stress. [7] [8] [9] [10]

Resveratrol has another important function in the body. It may interact with various hormones that affect blood vessels, like angiotensin, which constricts vessels and arteries. Perhaps by neutralizing the effects of that hormone, resveratrol helps to decrease blood pressure, which reduces stress on the cardiovascular system. [11]

Resveratrol may have therapeutic value to neuronal degeneration; however further studies are needed to verify this claim. A study by Thimmappa S.Anekonda, published in the Brain Research Reviews 2006, could perhaps be used to reduce the risk of Alzheimer’s disease. [12]

Peanut oil, like many vegetable oils, is quite rich in vitamin E, which is an essential vitamin for human beings. It is known to be particularly important for the maintenance and health of the skin, protecting it from the effects of free radicals that cause wrinkles, blemishes, and other signs of premature aging. The vitamin E in peanut oil keeps your skin looking young and healthy as you get older. [13]

A final benefit of the possibly impressive levels of resveratrol in peanut oil is the improvement of your immune system. Viral and fungal infections are particularly susceptible to this antioxidant, so adding peanut oil to your diet can keep you healthy in yet another way, by stimulating your white blood cell production to fend off any foreign agents in your body. [14]

In a study published in the Lipids in Health and Disease journal, oleic acid shows an increase in insulin production to undo the inhibitory insulin effect of TNF-α: Tumor Necrosis Factor-alpha. Peanut oil, which is possibly high in oleic acid ameliorates the diabetic symptoms of type-2 diabetic subjects characterized by inflammation. Findings suggest that peanuts are beneficial in lowering the risk of type-2 diabetes in women. [15]

Word of Caution: Although the types of fatty acids in peanut oil are generally beneficial, they are only healthy in moderate amounts. Remember, they are still technically fats, and are, therefore, high in calories. Don’t go overboard when cooking with peanut oil, as it can lead to weight gain. Obesity has a whole range of associated health risks, so be careful and enjoy your meals responsibly! [16]

Rate this article
Average rating 3.9 out of 5.0 based on 478 user(s).
Read This Next:
Popular Articles