Rice bran oil has become an increasingly popular vegetable oil that offers many advantages over standard vegetable oils. Millions of people are now using it to cook their food all over the world. Rice is one of the most widely available and popular food on the planet. The rice bran oil is extracted from the germ and husk of the rice kernels. [1] [2] 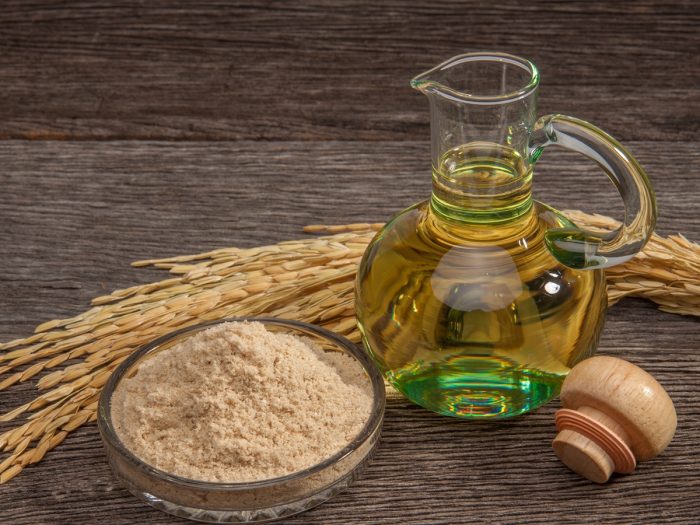 Rice bran oil is most often used in Asian cultures, including Japan and China, primarily because rice is already a staple food in their cuisines. However, the oil is becoming increasingly popular in other parts of the world because of its relatively low price point and the many health benefits that come from using it in food preparation. [3]

Research has been conducted on an extract of rice bran oil in terms of how it affects menopausal women. More than 90% of the women who took the supplement reported a reduction in hot flashes and other irritating symptoms of menopause. [5] 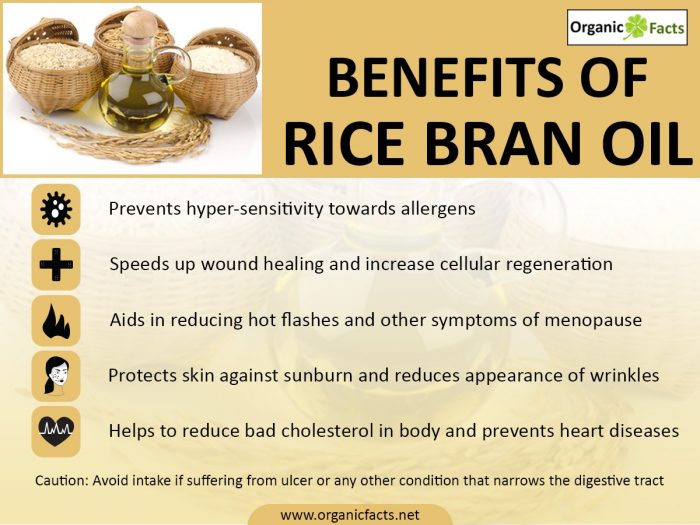 The World Health Organization and the American Heart Association have both stated that rice bran oil has the best possible composition of monounsaturated, polyunsaturated, and saturated fats compared to all other vegetable oils. This balance of fatty acids means that the cholesterol levels in your body can be reduced because of the beneficial forms of cholesterol. It inhibits the LDL or bad forms of cholesterol from bonding in the body. This can help reduce conditions like atherosclerosis and the subsequent afflictions like heart attacks and strokes. So just changing your cooking oil can protect your heart. [6] [7]

Rice and its by-products have long been evaluated for their ability to lower the risk of cancer. A 2018 study published in the journal Nutrients, found that rice bran oil demonstrates a unique potential to help prevent colorectal cancer. It showed that this effect is seen simply by including the oil in your diet. A review of animal and human studies suggests that this oil has chemopreventive properties against breast cancer and skin cancer. [8] [9] [10]

A 2017 study published in the International Journal of Molecular Sciences states that the oil plays a role in the chemoprevention of gastrointestinal cancer. It is able to inhibit cell proliferation as well as reduce inflammation. [11]

Vitamin E (tocopherol) is directly connected to the health and wellness of the skin. Free radicals can attack the skin cells and increase the signs of premature aging. Rice bran oil can increase your levels of vitamin E, which can speed up wound healing, increase cellular regeneration, smoothen the skin, reduce wrinkles, and provide protection from sunburn. Vitamin E also helps boost the protective quality of skin cells, keeping foreign toxins and pathogens from entering through the skin. [12]

Rice bran oil is hypoallergenic in nature. The oil will not cause any allergic reactions when used in cooking and can calm existing allergic reaction in the body. It can also prevent hypersensitivity to other unusual allergens. [13]

Although rice bran oil is technically high in calories, the viscosity of this oil ensures that the food absorbs only about 20% of the oil. When less oil is absorbed, the food still retains the flavor and gets the health benefits of the bran oil, but the total caloric intake is less than other vegetable oils. So rice bran oil is probably your best choice if you are worried about your weight. [14]

Rate this article
Average rating 3.8 out of 5.0 based on 390 user(s).
Read This Next:
Popular Articles