There are numerous benefits to using sea buckthorn oil, including its use for soothing asthma, treating respiratory infections, protecting the heart, stimulating cognition, soothing the stomach, speeding healing, boosting the immune system, eliminating pain and inflammation, and shielding the skin. This oil is also been research on for its ability to prevent cancer.

There are also a number of side effects that must be considered, such as dangerously low blood pressure, increased bleeding, skin irritation, and potential complications of pregnancy and surgery.

What is Sea Buckthorn Oil?

Sea buckthorn oil is made from the berries and seeds of the sea buckthorn plant, which is a shrub bearing the scientific name Hippophae rhamnoides. For thousands of years, these berries and the subsequent oil has been used in traditional medicine practices across Asia and Europe, and due to its versatile range of treatment applications, it is now globally available. From cosmetics and culinary uses to skin salves and weight-loss supplements, this oil remains critically important for countless cultures and individuals around the world. The many benefits of this oil are attributed to its high levels of monounsaturated fatty acids (oil from the fruit pulp), as well as polyunsaturated fats (oil from the seeds). Some oils on the market feature both of these oils, which provide a more comprehensive remedy than either oil by itself. This oil also contains high levels of carotenoids, tocopherols, plant sterols, and other antioxidants. [1]

Antioxidants are known to benefit cognition and neurodegenerative diseases in a number of ways. Using sea buckthorn oil, with its high levels of carotenoids, sterols and polyphenolic compounds, as well as unsaturated fats, can help reduce plaque deposition in neural pathways and slow down or even reverse the effects of dementia. [2]

There are significant amounts of vitamin E found in sea buckthorn oil, along with other tocopherols that can stimulate healing on the skin, while also providing an antibacterial shield to prevent wounds from becoming infected.

Traditionally, this powerful oil has been used by people with weak immune systems to give them antibacterial and antiviral protection. The high levels of vitamin C can also stimulate the production of white blood cells and seek out free radicals that might be distracting or straining the immune system. [4]

Significant levels of beta-carotene in sea buckthorn oil allow it to aid vision health, prevent dry eye, slow down the onset of macular degeneration, and possibly prevent cataracts from developing. This is because beta-carotene breaks down into vitamin A, an antioxidant renowned for its effects on vision health. [5]

Acts as an Analgesic

Used as a topical or internal analgesic, sea buckthorn oil can deliver pain-relieving effects to wounds, injuries and sprains, as well as headaches, pain from a terminal or advanced illness, and the chronic discomfort of arthritis.

Inflammation in any part of the body can be troubling, from the gut to the respiratory system. This oil’s soothing effect on tissues and organ systems, including its anti-spasmodic capacity, make it ideal for reducing swelling and discomfort associated with any number of health problems.  [6] 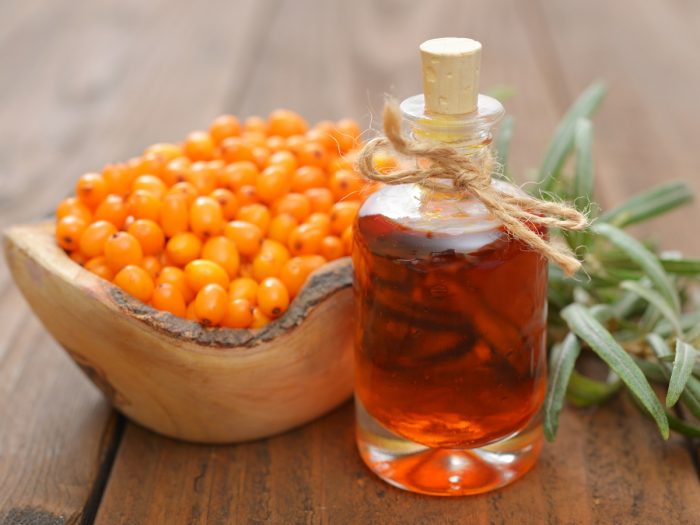 Nutrients in sea-buckthorn oil play an important role in the proper functioning of the human body. Photo Credit: Shutterstock

One of the most popular uses of sea buckthorn oil is for the treatment of respiratory problems, due to its expectorant and antibacterial nature. This oil can help break up mucus in the sinuses and respiratory tracts, while also attacking the underlying infection that is causing the symptoms.

Sea buckthorn oil has been used to relieve symptoms of asthma for thousands of years, but it also has anti-allergenic properties in other areas of the body. If you want to reduce your body’s release of histamines and cut back on allergic reactions, regular use of this oil might be exactly what you need. [7]

Applying this powerful oil to the skin is known to reduce signs of aging, such as wrinkles, blemishes, scars and age spots. This is due to the diverse range of antioxidants and tocopherols, which can prevent oxidative stress in the skin, boost collagen production, and stimulate healing.  [8]

If you suffer from ulcers, gastroenteritis, indigestion, diarrhea, constipation, bloating or excess flatulence, sea buckthorn oil can coat the stomach and reduce inflammation, while also rebalancing your microflora environment with its antibacterial properties. It can also lower acidity levels in the gut, which can minimize the symptoms of acid reflux disease.  [9]

Certain studies have noted the anti-carcinogenic effects of this oil, due to the bioactive compounds that are present. These can help slow the proliferation of human liver and colon cancer cells, making it difficult for cancer to spread. [11] [12]

Sea buckthorn oil has shown some ability to block UV radiation, but also a moisturizing and healing component that can soothe and quickly eliminate sunburn. This isn’t an adequate oil to replace normal sunscreen, but it can treat the effects of sun exposure, and offer limited protection against further damage.

There are some notable side effects of using sea buckthorn oil, such as bleeding issues, heart trouble, and inflammation. These are largely due to the powerful compounds and impact of this oil, not necessarily any inherent toxicity.

If you are undergoing surgery in the near future, avoid the use of this oil before and after the procedure. The anticoagulant nature of the oil can result in complications with healing, and the other compounds may interact with anesthesia in various ways.

Lowering blood pressure is usually a good thing, but in the case of sea buckthorn oil, if you are already using hypertension medication, the combination can result in dangerously low blood pressure levels.

As with any potent oil, those with sensitive skin may experience topical inflammation, itching or redness. It is best to apply a small amount of the oil to a patch of skin and wait a few hours for any possible negative reactions. If none appear, then use the oil on a larger area.

Research is limited in terms of use during pregnancy, and while there is no known toxicity to this oil, most experts recommend avoiding the oil while pregnant and breastfeeding or speaking explicitly with your doctor before adding the oil to your health regimen.

Rate this article
Average rating 3.8 out of 5.0 based on 58 user(s).
Read This Next:
Popular Articles