Tamanu oil boasts a number of impressive benefits including its ability to protect the skin, reduce inflammation, lower pain levels, speed healing, fight fungal infections, boost the immune system and slow the aging process, among others. It is also found to have anticancer properties.

This tropical oil also comes with certain side effects, namely skin inflammation, redness, and itching, although these effects are rare and relatively mild. Gastrointestinal distress may also result if consumed. If you responsibly use this topical oil, you should be able to enjoy clear skin and a long list of other health benefits.

What is Tamanu Oil?

Tamanu oil is produced from the fruit kernel of the tamanu tree, which is native to Southeast Asia and can be found in Polynesia, Melanesia, Vietnam, Malaysia, and other tropical regions. This tree, scientifically known as Calophyllum inophyllum, [1]flowers twice a year, and eventually produce small yellow fruit, inside of which is a large nut kernel. This is where the rich and potent tamanu oil can be found but the process of isolating the oil can take quite a while. These nuts must be left in the sun for 1-2 months, and kept away from moisture. As the nut dries, a dark, sticky oil will appear on the surface, which can be harvested and processed into potent tamanu oil.

This oil has long been a part of Southeast Asian natural medicine and remains a crucial part of tropical cultures in this area of the world. The majority of health benefits attributed to tamanu oil come from the high levels of monounsaturated and polyunsaturated fatty acids. More specifically, in terms of fatty acids, tamanu oil contains roughly 1/3 oleic acid and 1/3 linoleic acid, as well as approximately 10% stearic and palmitic acids, respectively. The remainder of the oil is composed of terpenes, benzoic acid, lipids, saturated fats, and other volatile compounds and antioxidants.

Using tamanu oil is popular for people struggling with skin irritation, blemishes, premature aging, wrinkles, infections, inflammation, high cancer risk, low immune system, chronic pain, and wounds, as well as those people who have recently undergone surgery, injury, or extended illness. Again, note that tamanu oil is primarily intended for topical use, and internal consumption may result in very negative side effects. A few drops of this oil in most preparations are enough to be effective, particularly on small areas of pain, irritation, infection or inflammation.

With notable levels of antibacterial, antiviral, antiseptic and anti-fungal components, this tropical oil can help to protect the immune system against a wide variety of pathogens, as well as environmental irritants and pollutants. Given that the skin is the largest organ in the body, it is also the most susceptible to infection, so applying this immune system shield to your skin is a way to bolster your body’s first line of defense. [2]

Traditionally used for the protection of the skin, tamanu oil is ideal for soothing irritated patches of skin on the feet, hands, extremities and in areas that are prone to bacterial infection, such as the underarms. The cooling, moisturizing and anti-inflammatory properties of this oil make it ideal for minimizing the appearance and severity of skin irritation. The itching discomfort of acne can also be solved by the regular application of this oil, although some people find that it is too harsh to put on the face, and instead, use this oil on other parts of the body. [3]

These are the natural byproducts of cellular metabolism that can cause healthy cells to mutate, and also lead to chronic diseases such as cancer. More importantly, free radical damage can weaken skin elasticity, contribute to wrinkles and blemishes, and compromise the skin’s ability to regenerate. Tamanu oil can effectively slow down that process to keep you looking young for longer! [4]

The antioxidant and stimulant nature of this oil makes it ideal for treating wounds, cuts, scrapes, bruises, and other basic injuries. The monounsaturated fats and antioxidants will not only stimulate the healing process of damaged cells but will also minimize the appearance of any scars that an injury might leave behind. [5] [6]

When it comes to topical pain relief, tamanu oil can be readily applied to sore joints and sources of chronic pain, as well as everything from insect bites to sunburn. Only a small amount of this oil is required to have an effect on pain when topically applied. [7] 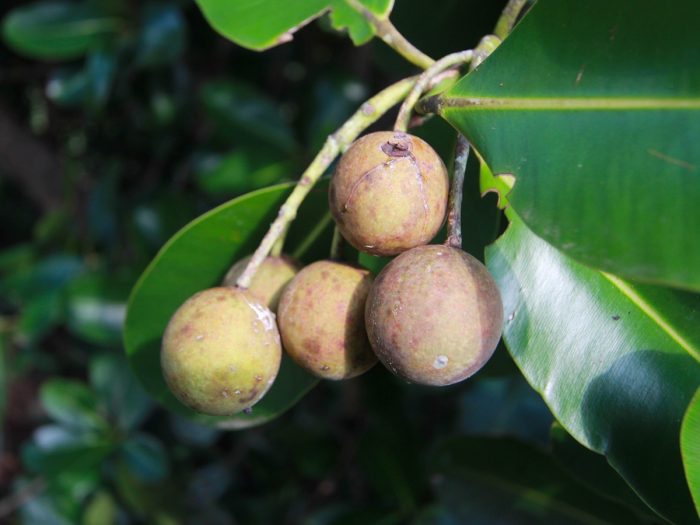 There are many different forms of inflammation throughout the body, but with transdermal delivery, the anti-inflammatory compounds found in tamanu oil can be quickly spread throughout the body. Specifically, this oil is recommended for people with sciatic nerve pain and arthritis, as the relief is noticeable and rapid! [8]

The oil of the tamanu kernel has a distinct, nutty smell that many people find quite pleasant. As a result, this oil is often applied under the arms and other perspiration-heavy parts of the body in order to reduce body odor. When used on the feet and toes, this oil helps eliminate fungal infections, while also making sure your feet don’t smell! [9]

Unlike many powerful oils, tamanu oil is safe to use on your children in moderation. In fact, this oil has been used for generations to treat diaper rash and other skin conditions in infants, providing relief from discomfort and a quick solution for itching and redness. [10]

Although research in this area is limited, it is believed that the unique anti-inflammatory and antioxidant blend within tamanu oil makes it a valuable tool in the fight against cancer.

The International Journal of Advanced Research has published research on tamanu suggesting that the polyphenolic compounds in this oil may be very helpful as potential cancer chemopreventive agents. [11]

Since the fatty acid content is strikingly unique in this oil, it is hard to suggest a substitution on that basis. To replace the nutty scent, one can look at macadamia nut oil. Otherwise, it is always a good idea to try a combination of shea butter and olive oil to get an approximate blend of fatty acids.

Side Effects of Tamanu Oil

There are very few reported cases of negative side effects from tamanu oil, although some people report skin irritation, itching, and redness. Internal consumption of this oil is not recommended, as research is limited to the internal effects. While other parts of the plant have been used for internal use within traditional medicine practices, this oil is a highly concentrated remedy that is primarily intended for the skin.

Rate this article
Average rating 4.2 out of 5.0 based on 169 user(s).
Read This Next:
Popular Articles