For people who want a nutritious boost in their diet, alfalfa sprouts are a potentially low-calorie and delicious option. These young seedlings provide a number of impressive health benefits like possibly promoting weight loss, preventing aging, managing diabetes, improving digestion, building bone health, helping heart health, and lowering cholesterol levels. Alfalfa sprouts are known to be a rich source of plant-based estrogen that boosts women’s health, might reduce the symptoms of menopause, and can regulates menstrual cycles.

What are Alfalfa Sprouts?

Alfalfa sprouts are immature seedlings of the alfalfa plant, which bears the scientific name Medicago sativa. [1]While the plant itself is rarely used as a culinary element, due to the bitterness of the leaves, the young seedlings have a milder flavor and are packed with beneficial nutrients, minerals and antioxidants. Native to Central Asia and areas of the Middle East, the Arabs honored its strengthening qualities by naming it al-fal-fa, which means “father of all foods.” [2]

Alfalfa sprouts can easily be added to salads, sandwiches, soups, and as a topping for certain savory dishes. In Asian cultures, alfalfa sprouts remain popular in local cuisines and this type of sprout can be easily prepared at home. 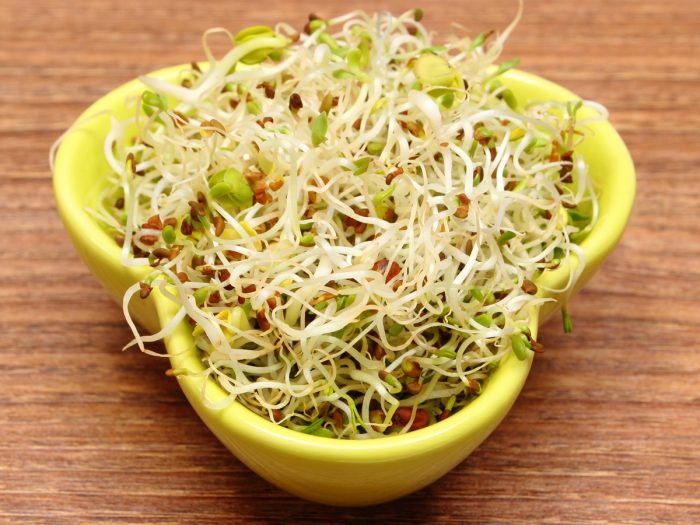 Its seeds or dried leaves can be taken as a supplement, or the seeds can be sprouted and eaten in the form of alfalfa sprouts. Photo Credit: Shutterstock

Alfalfa sprouts are a potentially rich source of numerous minerals, such as phosphorus, potassium, calcium, iron, magnesium, copper, manganese, in addition to vitamin C, vitamin A and numerous B vitamins, such as folate, thiamin, riboflavin and pantothenic acid. Impressively, one cup of serving (33g) of alfalfa sprouts delivers nearly 13% of your daily recommended intake of vitamin K, but only 7.6 calories, and a low glycemic index rating. [4]

You can also get a healthy dose of fiber, at nearly 2 grams per 100 grams of sprouts. There is also a notable amount of protein in these nutrient-dense sprouts, offering nearly 8% of your daily intake in every 100 grams. The sprouts are also densely packed with bioactive plant compounds like saponins, flavonoids, phytoestrogens, coumarins, alkaloids, amino acids, and phytosterols. [5] [6]

The most notable effects of alfalfa sprouts include the following:

According to the book, The Encyclopedia of Healing Foods, co-authored by Michael T. Murray, and Joseph Pizzorno, these sprouts are packed with phytoestrogens and antioxidants, which balance hormones, reduce inflammation, and suppress the formation of new blood cells that give rise to cancerous cells. [7]

The potentially high levels of vitamin K and phytoestrogens in alfalfa sprouts make them ideal for women as they balance estrogen levels to reduce hormone-related symptoms of menopause like mood swings. Vitamin K also has blood-clotting properties, which is why it can curb excessive bleeding. [8] [9]

With a minuscule amount of calories in these sprouts, they are the perfect fiber-rich food that will keep you feeling full without significantly increasing your daily calorie intake. Furthermore, the vitamins in these sprouts can help to stimulate the metabolism, which increases energy levels and boosts energy metabolism, thus helping to passively burn fat faster. While you shouldn’t eat too many alfalfa sprouts due to potential toxicity, daily consumption in your salads can definitely help to curb hunger pangs. [10]

The notable fiber content in alfalfa sprouts makes it a prime food choice for people who are trying to avert diabetes. According to an animal study by the Polytechnic Journal, it concluded that alfalfa leave powder extract reduced plasma glucose levels in diabetic subjects. This helps in managing diabetes and cuts down the probability of it developing in the first place. Regular consumption of sprouts can lower your risk of metabolic syndrome and other conditions related to diabetes. [11]

Studies dating back more than 40 years have found that alfalfa sprouts do have cholesterol-lowering properties, which means that these are good food choices for people at risk of coronary heart diseases. By reducing LDL cholesterol levels, you are able to protect against plaque formation in the arteries and blood vessels, which can lower your risk of atherosclerosis, heart attacks, and strokes. [12]

A single serving of alfalfa sprouts provides nearly 15% of your daily required intake of vitamin C, making these sprouts an excellent immune booster. By possibly stimulating the production of white blood cells, alfalfa sprouts can protect the body from infections and inflammation. They also help in improving growth and repair, as vitamin C is such a critical part of collagen synthesis. [13]

Dietary fiber is needed by the body for many things including optimizing digestion and promoting the movement of stool through the bowels. Alfalfa sprouts are dense with dietary fiber and are known to reduce symptoms of constipation, diarrhea, and gastrointestinal distress. [14]

There is a surprisingly large amount of protein in alfalfa sprouts – nearly 10% of your daily requirement in a 100-gram serving. This can help with growth, development, and repair throughout the body, and will even help boost muscle mass and decrease fat deposition. [15]

May Speed Up Healing Process

Vitamin K is in potentially high supply within alfalfa sprouts, which can increase the speed of blood clotting in the body, making the healing process for wounds faster, and thus reducing the chance of infection. While too much vitamin K can cause cardiovascular problems and excessive blood clots, a moderate amount of alfalfa sprouts shouldn’t have these negative side effects. [16]

Magnesium, iron, calcium, and vitamin K, all play a key role in building strong bones and alfalfa sprouts have these nutrients in moderate supply. Regular consumption of these sprouts helps to prevent the early onset of osteoporosis. [17]

With notable amounts of various B vitamins, these sprouts are able to stimulate metabolism in critical ways, ensuring that enzymatic reactions, hormone production, energy metabolism, and basic bodily functions take place smoothly. Being deficient in B vitamins has a number of negative side effects and these sprouts help to avoid them. [18]

These alfalfa sprouts are considered a possibly high-antioxidant food and have been associated with certain anti-aging properties, such as reducing the appearance of wrinkles and blemishes and improving the elasticity of the skin. The antioxidants can counter the effects of oxidative stress when eaten regularly (in moderation) and improve the glow and appearance of your skin. [19]

Side Effects of Alfalfa Sprouts

There are some potential side effects of alfalfa sprouts that should be taken into consideration, such as an increased risk of certain kind of cancers, worsening of autoimmune diseases, potential infections, dangerously low blood sugar levels and bleeding problems.

Rate this article
Average rating 4.0 out of 5.0 based on 64 user(s).
Read This Next:
Popular Articles