Jaggery is a sweetener that has gained popularity as a “healthy” alternative to sugar. This sweetener has acquired the badge of a serious health halo, too. Due to its sweet and wholesome flavor, it is often referred to as a “superfood sweetener”. It has a sugary taste with a yellowish-golden appearance and is interesting over sugar.

The important health benefits of jaggery include its ability to cleanse your body, act as a digestive agent, sweeten your food in a healthy manner, and provide good amounts of minerals.

Most of you may not find jaggery attractive as a food item because of the dark yellow color and its amorphous and gooey look. Of course, there are some who find it’s color and appearance appealing and interesting over the white, crystalline sugar. [1]

The health benefits of jaggery include its ability to aid in digestion, treat constipation, boost energy levels, act as a cleansing agent, and much more.

In India, it is recommended to take a few grams of jaggery after a heavy meal or after eating meat because it facilitates digestion. It activates digestive enzymes and functions like acetic acid in the stomach, thus speeding up digestion and smoothening the process, ultimately reducing strain on the intestines and the digestive tract. [2]

Acts as a Cleansing Agent

You may not normally connect sweeteners and sugars with cleansing the body, but it is one of the well-proven benefits of jaggery. It effectively cleans the respiratory tracts, lungs, food pipe, stomach, and intestines. 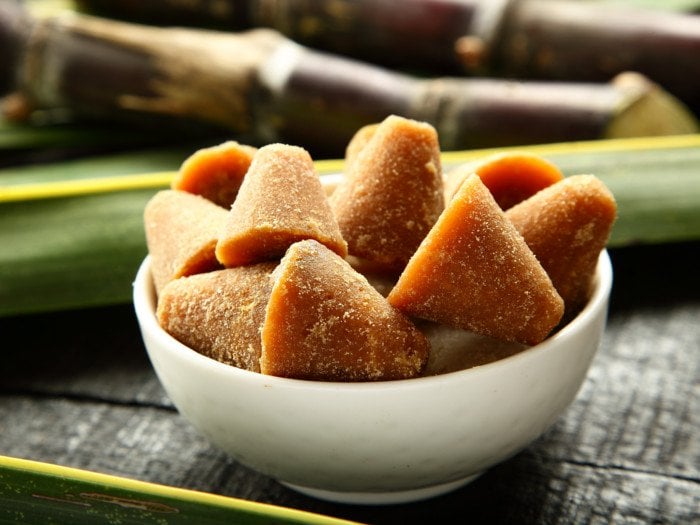 If you’re a fan of the flavor of molasses or caramel, you’ll love jaggery, a staple of South Asian cooking. Photo Credit: Shutterstock

Jaggery pulls out dust and unwanted particles from the body, while also giving relief from constipation, due to the presence of fiber in it. As it reduces constipation and stimulates bowel movements, it further cleanses the body of toxins.

Studies show and doctors advise that a sudden rise in sugar or energy level can be a major threat to the internal organs. This sudden uplift can cause severe damage to kidneys and eyes, raise blood pressure, and create a number of problems in related organ systems. Jaggery is a more complex form of carbohydrate than plain sugar. This can provide its eaters with warmth and energy without harming their internal organs. [3]

Unlike sugar, jaggery is rich in minerals, mainly iron but it also has traces of other mineral salts. While most of the iron comes through its processing in iron vessels, the other minerals come directly from the sugar cane juice, since the juice does not undergo refinement or bleaching of any kind. Therefore, jaggery is a very good source of minerals for the body. In an article published for The Medscape Journal of Medicine, jaggery was recommended as an alternative to iron supplements for pregnant women, especially for those with iron deficiency. [4]

There are plenty of natural and artificial sweetening agents available on the market, with good old white sugar right at the top. However, most of them are just plain sweeteners. The benefit of jaggery is that it is a colorful, tasty, and healthy sweetener. Taste plain sugar and jaggery one after another, and it will be very clear to you. Don’t limit yourself to the sugarcane flavor; go ahead and taste the date palm, palmyra jaggery or any of the other flavors available.

Other Benefits & Uses of Jaggery

Jaggery (sugar cane variety) is often used as a lining for the inner walls of earthen ovens and is meant for seasoning the materials cooked inside.

Low-quality jaggery, mixed with the dust of tobacco, is used as toothpaste in many parts of India. It is especially popular in the rural villages where some people, highly addicted to it, are frequently seen rubbing this on their teeth. Definitely, this is not a healthy way to treat dental issues.

Low-quality jaggery is often mixed with cattle-feed to enhance its taste and make the cattle eat more. It also sweetens the milk of the cattle. [5]

There are instances where jaggery is used as bait for hunting wild animals. It is dumped in the open so wild animals get attracted by its smell to taste it and fall prey to the hunters. Since this derived sweetener also contains salt, besides being sweet and having a strong aroma, animals like its taste.

Among Hindus, it is customary to take a bite of jaggery after attending a funeral, along with Margo leaves, crushed black pepper, and to touch fire and iron, as it is believed to purify. In certain religious ceremonies and rituals, small idols of jaggery, rice paste, and turmeric are prepared and offered to gods and goddesses.

Jaggery, mixed with a number of ingredients including ant eggs, ghee, edible oils, cardamom powder, nutmeg powder, mace, poppy seeds, and a variety of other things can form an excellent bait mixture. Fish cannot resist its smell and are pulled to the gaming spot where the hooks are waiting!

Jaggery is less likely to give you a bad reaction to acidity as compared to white sugar. There is no good explanation for this, although this is frequently observed. Even doctors suggest switching to jaggery for sweetening purposes when someone is having an unexplainable acidic reaction.

Rate this article
Average rating 4.0 out of 5.0 based on 411 user(s).
Read This Next:
Popular Articles