Molasses may seem like a sweet, sticky substance, but in fact, it has countless health benefits. The health benefits of molasses include relief from menstruation-related problems, management of diabetes, acne, and other skin disorders. It is thought to improve bone and hair health, maintain the functioning of the nervous system, and speed wound healing.

Molasses is a by-product obtained from the processing of sugar cane and sugar beet into table sugar. It derives its name from the Latin word for honey, Mel. Its viscosity and thick texture gave rise to the famous adage “slow as molasses” used to describe any slow-moving person or thing. Along with its usage as a sweetener in food products, it also offers a range of health benefits. [1] [2]

It is typically a thick syrup, or treacle, and comes in a variety of forms, depending on what substance is used to extract the sugar. Sugarcane and sugar beets tend to produce thicker molasses. The sugar beet variety has a strong, foul taste, and is usually not considered palatable for human consumption.

Historically, it was produced in the Caribbean, where the cultivation of sugarcane and sugar beet was the highest. From there, it was imported to the United States during the early twentieth century. Today, it is produced on a large scale in Thailand, India, Taiwan, Brazil, the Philippines, and the United States. [3]

Molasses comes in three varieties – light, dark, and blackstrap – all of which come from different foods processed into sugar. The nutritional content and quality of it depend on the method involved in its refining process, the ripeness of the plant from which it is extracted, and the quantity of sugar that is extracted.

How does Molasses taste?

Light molasses has a sweet, mild taste, while dark molasses is richer and full-bodied. Dark molasses is almost like saccharine at times, which is why it’s used to flavor sweet desserts and dishes. Blackstrap molasses tends to be bitter and unpleasant to eat alone. 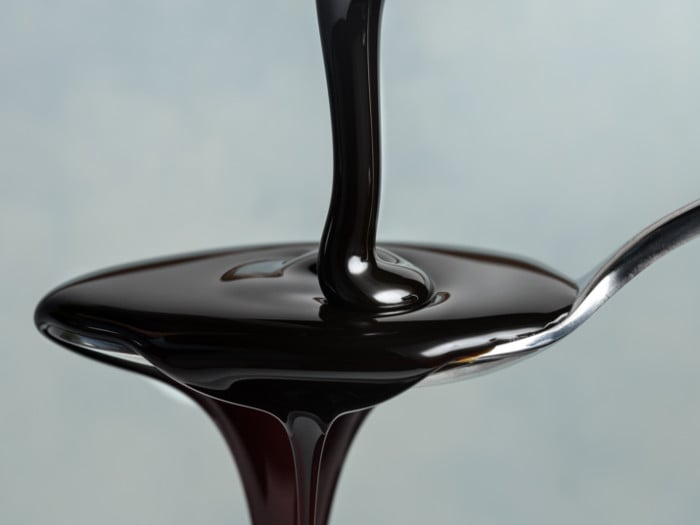 You can add molasses into your baked goods as a sugar replacement. Photo Credit: Shutterstock

Molasses is a good source of energy, carbohydrates, and sugars as well. In addition to this, it offers several vitamins and minerals, such as B-vitamins (niacin or vitamin B-3, vitamin B-6, thiamine, and riboflavin) and essential minerals such as calcium, magnesium, potassium, copper, iron, phosphorus and sodium, to name a few. [7]

Molasses is very nutritionally dense – a single tablespoon provides a burst of sugar and carbohydrates.

Research published in the Journal of the American Dietetic Association on the antioxidant content of sugar alternatives shows blackstrap molasses containing the highest amount of antioxidants as compared to refined sugar, corn syrup, raw cane sugar, and other sweeteners. Its antioxidants protect the body against the oxidative damage associated with various disorders and degenerative diseases. This makes it a better alternative to refined sugar for most people. [8]

Molasses is a good source of iron and can be very effective for menstruating women who are at major risk of iron deficiency due to blood loss. It is a better alternative for contributing iron to the body as compared to other fatty sources like red meat.

A study published in the Journal of Canadian Chiropractic Association states that iron helps to prevent disorders like menorrhagia, which causes excessive blood flow for a longer duration during menstruation. It contains minerals such as magnesium and calcium, which help prevent the clotting of blood, relieve menstrual cramps, and maintain the health of uterine muscles. It is a healthy, natural remedy, for menstrual discomfort, which is worth trying for those in need. [9] 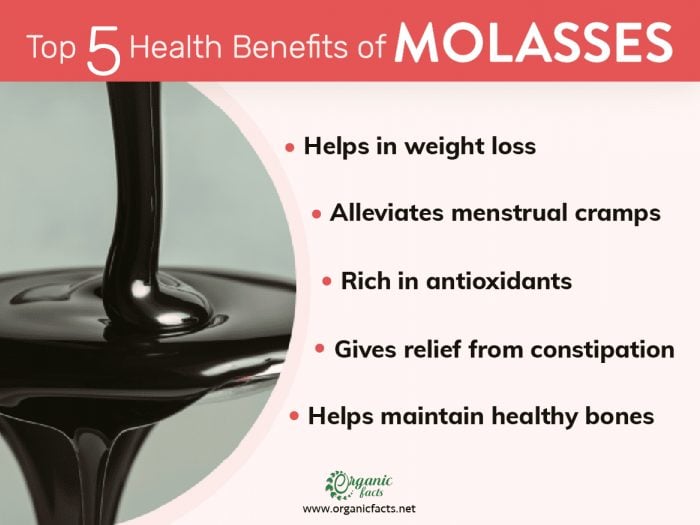 Molasses is a by-product obtained from the processing of sugar cane and sugar beet into table sugar.

According to a study in the Journal of Geriatric Cardiology, blackstrap molasse is a good source of calcium. The presence of calcium plays an important role in maintaining bone health, the functioning of enzymes, and cell membrane function. It is also required to maintain healthy teeth and protect the body against bone diseases common during menopause. In addition to healthier bones, the ability of muscular contraction is also attributed to the presence of calcium in the body. [12]

A study published in the European Journal of Nutrition has revealed that blackstrap molasses help in stabilizing blood sugar levels. It has a moderate glycemic index and aids in slowing the metabolism of glucose and carbohydrates, which subsequently means less insulin production. This helps in preventing the accumulation of excess fats or lipids in the bloodstream. It possesses the essential trace element chromium, valuable in relation to insulin action, and maintenance of glucose tolerance in the body as well. [13]

Molasses contains the highest amount of chromium (0.266 mg/kg) as compared to refined white sugar and brown sugar. A deficiency of chromium may result in weak glucose tolerance, according to studies, which can lead to diabetes. This deficiency can represent a serious risk for chronic diseases like atherosclerosis, blood cholesterol, and other cardiac disorders. [14]

Molasses contains the essential mineral potassium, which is required for the proper functioning of cells. It helps in maintaining the acid-base balance of the body and prevents heat exhaustion. Potassium also plays an important role in nerve and muscle contraction and helps to maintain cardiac health. Adequate intake of potassium-rich foods like molasses helps prevent disorders as hypokalemia may help in reducing blood pressure as well. [15] [16]

Historically, molasses has been considered for use as an acne treatment, according to the book, ‘Encyclopedia of Folk Medicine: Old World and New World Traditions‘ [17] [18]. It mentions the use of molasses for acne treatment. It contains lactic acid, which helps in relieving the symptoms of acne. Lactic acid is produced by lactic acid bacteria and plays an important role in carbohydrate metabolism. It is effectively used in natural, non-toxic, and non-allergenic treatments of acne, and some other skin disorders as well.

Molasses has been used in the treatment of wounds and skin burns. It also promotes the healthy growth of tissues. Due to the wide range of essential minerals, it serves very well as a potent healer. [19]

According to the Journal of Dietary Supplements research, molasses is incredibly useful in treating anemia. It helps in the absorption of iron, the formation of red blood cells, and the maintenance of a healthy immune system. It is also rich in the mineral copper, which aids in reducing free radicals from the body. A deficiency of copper and iron can result in anemia, thyroid problems, cardiac arrhythmia, and osteoporosis. [20]

The iron content helps maintain healthy levels of hemoglobin. Hemoglobin plays a key role in supplying oxygen from the lungs to other parts of the body. It is also vital for the production of energy and aids in boosting metabolism. [21]

Blackstrap molasses is sometimes referred to as pregnancy tea, owing to the presence of iron, folate, and other essential minerals. Consumption of this tea (molasses in hot water) during pregnancy provides calcium, essential for the growth and development of the baby. It also works as a light laxative. [22]

It contains magnesium, which helps in the functioning of the nervous system. It relaxes our nerves and blood vessels by balancing calcium volume and blocking it from rushing into the nerves. Unblocked and speedy flows of calcium into the nerves can over-activate them and lead to the transmission of too many signals and excessive nerve contraction. A deficiency of magnesium in the body can lead to hypertension, muscle cramps, spasms, and general body fatigue. [23]

Blackstrap molasses is a good source of vitamins and minerals, including vitamin B6 and pantothenic acid. The deficiency of these vitamins can cause headaches, asthma, fatigue, and stress. Consumption of molasses helps provide these required vitamins and minerals and maintains good overall health. However, more scientific research is required to corroborate this point. [24]

Anecdotal evidence suggests its extract is good for hair and it promotes healthy hair growth. It softens and conditions the hair, adds rich texture, and prevents it from prematurely graying. However, more scientific research into this is required.

There are many uses explained in detail below.

However, you can just plug your nose and slurp down a spoonful and see the effects your body will thank you for! kif you cannot find molasses easily in the market, try this recipe to make your own batch at home.

Word of Caution: Some people might develop allergic reactions due to sensitivity towards the sulfite present in the sulfured variety. The unsulfured type is free of sulfur dioxide and safe to use in such cases. However, it is always advisable to obtain medical consent before considering it as a therapeutic remedy for various medical conditions.