Drinking a hot cup of cocoa may be as healthy as it is delicious as the unsweetened raw cocoa powder is rich in antioxidants. The top health benefits of cocoa may include its possible ability to lower blood pressure, prevent the risk of cardiovascular diseases, and aid in weight management. The potent polyphenols in cocoa can also help improve blood flow to the brain.

Cocoa is a powder made from roasted, husked, and dried cacao beans, which are the fermented seeds of the cacao tree. The cacao tree stands about 12-25 feet tall and grows naturally in tropical climates. The fruits, or the cacao beans, are actually pods filled with sweet pulp enfolding a cluster of about 20-40 cacao seeds. The Latin name for cacao beans is Theobroma cacao, which translates to “Food of the Gods”. These ground beans (cocoa liquor or cocoa mass) also contain cocoa butter, a non-dairy, naturally occurring fat present in cacao beans. About 50-60 percent of cocoa liquor consists of cocoa butter. You can read about the 6 Surprising Cocoa Butter Benefits to know more. [1]

You may have seen cacao powder as well as cocoa powder in the supermarket aisles and wondered about the difference. Cacao powder refers to the product made from beans that have not been roasted and contain a higher number of antioxidants as compared to cocoa powder. Commercially available chocolates and cocoa-products may not be rich in the original beneficial flavonols of cacao beans since they can be get destroyed by over-processing. In this article, we look at the health benefits of dry, unsweetened cocoa powder. [2]

According to USDA, a tablespoon of unsweetened cocoa powder may contain 12 calories, 3.1 grams of carbohydrates, and 1 gram of protein. Cocoa powder is a rich source of polyphenols such as catechins, flavonol glycosides, anthocyanins, and procyanidins. It might also contain stimulants like theobromine and caffeine. In addition to this, cocoa powder contains minerals like magnesium, copper, and iron. [5] [6]

To obtain the benefits of cocoa, it is important to consume the correctly sourced product. A small piece of dark, unsweetened, or unprocessed chocolate may be considered to add some flavor and health to your diet. Let’s look at some of the major health benefits of cocoa. [7] [8]

Researchers found that consuming cocoa-containing foods can help lower blood pressure levels in a small sample size of participants. A meta-analysis also revealed it might have seen a positive change in the systolic and diastolic blood pressure as a consequence of consuming cocoa-based products as compared to an intake of black or green tea for seven days. These favorable changes are attributed to the presence of antioxidants in it that can stimulate the production of nitric oxide, which helps keep blood vessels relaxed. [9] [10] [11]

A comparative research study published in 2003 in the Journal of Agricultural and Food Chemistry has made it evident that cocoa may exhibit possibly higher antioxidant activity than black tea, green tea, and red wine. Antioxidants may help neutralize the oxygen-based free radicals that are present in the body. [12]

Cocoa powder is also possibly abundant in phenolic phytochemicals and flavonoids. Zinc, that may be present in it in possibly high quantities, can help protect against oxidative stress, which is a major cause behind accelerated aging. [13] 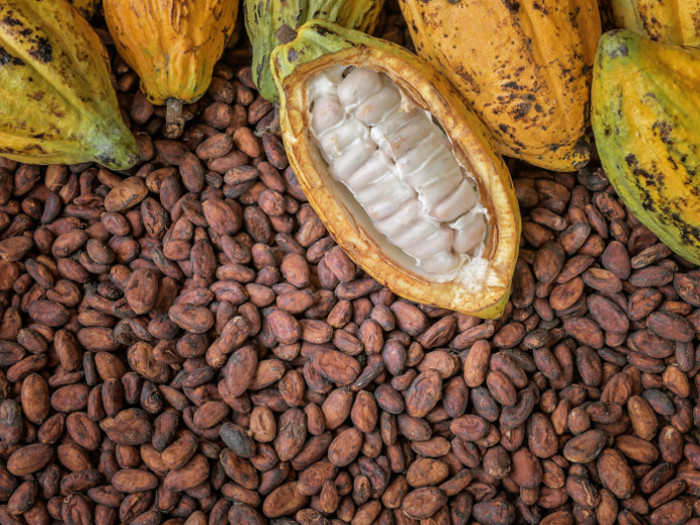 Cocoa may contain a possibly high amount of flavonoids, like flavonol. Research led by Dr. Norman K. Hollenberg has suggested that flavanol may aid in maintaining a healthy brain. These neuroprotective benefits could also have favorable effects on learning and memory functions. The findings have advocated that the consumption of cocoa-based products may enhance the flow of blood to the brain and they have provided evidence of the therapeutic potential for curing vascular disorders. [14] [15] [16] [17]

Cocoa powder is rich in flavonoids – namely, procyanidin, catechin, and epicatechin, which may have antioxidant properties. In moderate amounts, it can help in protecting the cells from damage, while strengthening the heart. It may prevent the formation of fatal blood clots, which can lead to stroke or cardiac failure. The flavonoids possibly possess anti-platelet aggregating effects and modulate primary hemostasis, which is the measure of time blood takes to clot. This ultimately can help prevent atherosclerosis and thrombosis. [18] [19] [20] [21] [22] [23]

A research study published in the American Journal of Clinical Nutrition suggests that consumption of cocoa powder may be effective in improving insulin resistance and glucose metabolism. These mechanisms, in turn, may aid in regulating sugar levels in the body. The proanthocyanidins derived from this product may help in inhibiting the cataract formation occasionally induced by diabetes, according to one animal study. The intake of this flavanol-rich bean can also have therapeutic potential in improving the vascular function of people with diabetes on various medications. [26] [27] [28]

Cacao beans contain xanthine and theophylline, which may aid in relaxing bronchial spasms and can open constricted bronchial tubes. This might give it anti-asthmatic properties and is valuable in curing various allergies, including asthma and shortness of breath.

Research published in 2014 in the International Journal of Immunopathology and Pharmacology suggests that unsweetened powder can have anti-asthmatic properties as it contains theobromine. [29]

A study has shown the potential benefits of cocoa might include preventing high-fat-diet-induced obesity. Its intake can help in modulating lipid metabolism and may reduce the synthesis and transport of fatty acids. It may also improve thermogenesis, which is the mechanism of heat production in white adipose tissues and the liver. However, remember that if you are consuming cocoa powder in foods and beverages that contain high amounts of sugar and fat, it will be detrimental to weight loss. [30]

May Help With Skin Care

Research findings suggest that the consumption of flavonol-rich cocoa can help in decreasing the effects of UV-induced erythema, and may reduce skin roughness and scaling. It might also aid in enhancing skin elasticity, hydration, and density. Epicatechin present in cacao can aid in increasing the oxygen saturation of hemoglobin, stimulating the healthy flow of blood in the dermal (skin) tissues, and could contribute to endogenous photo-protection. It can also be used in the preparation of various skin care products. [31] [32] [33] [34]

Cocoa has flavonoids, such as epicatechin and catechin, which may have been found to have an anti-neurodegenerative effect. In a rat model study conducted by Cho et al., cocoa procyanidins (a type of flavonoid) had a protective effect against oxidative stress, which may have been strongly linked to the development of neurodegenerative disorders, including Alzheimer’s disease. Further human studies are required to research the potential benefits of this bean against neurodegenerative diseases over time. [35] [36] [37]

Cocoa has been treasured worldwide for its usage in the manufacturing of chocolate and other sweet delicacies. Fermented and dried cocoa beans can be processed to produce a variety of products.

In addition to cacao beans, the therapeutic utilization of cacao bark, butter, and flowers have also been valued since ancient times for treating various diseases like skin ailments, bowel malfunction, and wounds. [42]

The major side effects of cocoa include:

Cocoa is a source of caffeine and excessive intake may cause the following: [43]

Note: Avoid use before surgeries to avoid any interference with blood sugar control.

Caffeine may influence the effects of certain medications prescribed before the diagnostic test associated with the heart. It is generally advised to avoid caffeine-rich beverages or foods such as cocoa before such cardiac examinations. Also, consult your doctor before adding a new type of food, especially one with so many unique compounds, into your diet.

How can you tell if the cocoa powder has gone bad?

You can pass the powder through the smell test! If the cocoa powder has gone rancid, it will give an unpleasant odor and can cause digestive problems if consumed.

Cocoa is native to the Amazon region of South America. Historically, it is considered a very important crop in Central and South America. Along with its well-established role in the manufacturing of chocolate, the healing and medicinal benefits of cocoa have been appreciated since the ancient Mayan and Aztec civilizations were ruling. [45]

Its beans were so prized that the native tribes used them as a form of currency. Today, it is produced across the world, with about forty percent of the harvesting done on the South Coast of West Africa, along with Indonesia, Ghana, Brazil, Nigeria, and Cameroon, which contributes to the overall production. [46] [47]

Rate this article
Average rating 4.1 out of 5.0 based on 529 user(s).
Read This Next:
Popular Articles