Spirulina is blue-green algae with a perfect spiral shape. This spiral shape is the reason for the name Spirulina. It belongs to a cyanobacteria species and it is scientifically known as Arthrospira platensis. Other subspecies include Spirulina maxima and Spirulina geitleri. It is generally found in alkaline lakes in Mexico and Africa. It is rich in nutrients, such as proteins, carbohydrates, vitamins, minerals, and trace elements. It has the capability of surviving in the harshest conditions, both environmentally and chemically. It can survive extreme alkaline conditions such as highly saline waters containing 30 grams to 270 grams of salt per liter. [1] [2]

Spirulina is believed to be a photosynthetic species that is about 3.5 billion years old. It is also speculated that such species were responsible for releasing oxygen into the atmosphere on the early Earth. [3]

This amazing food first came to light in the 1940s in French Equatorial Africa, when French troops stumbled upon the food that the locals were growing. It was growing on the surface of lakes and it was being collected, sun-dried and sold in the local markets. Biologists concluded that it was an alga that was being grown and eaten. It is also the food of local birds, like flamingoes. 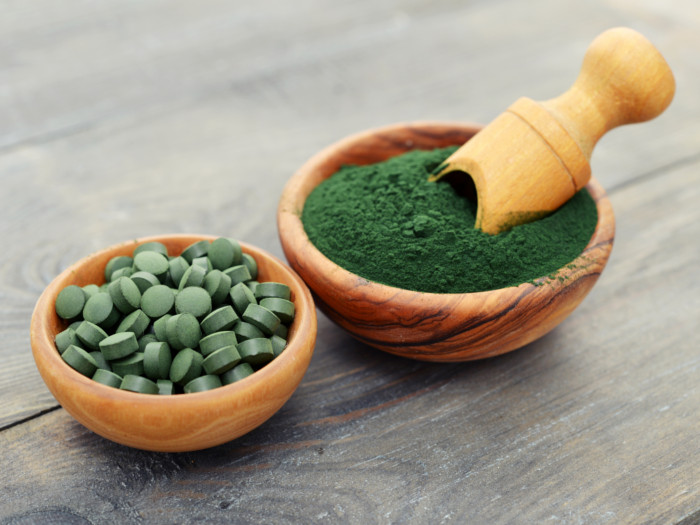 Spirulina is a type of blue-green algae that people can take as a dietary supplement. Photo Credit: Shutterstock

Spirulina geiteleri was discovered in the alkaline lakes in Mexico and it was also being consumed by the locals. Historical writings revealed that it was consumed as food even during the time of the Spanish conquest during the 15th century. Even Columbus’ personal literature revealed something about an ooze-like substance being collected from lakes, sun-dried and baked like bread. [4]

According to the National Nutrient Database for Standard Reference, the nutrients found in spirulina per 100 grams include 290 kcal of energy, 57 grams of protein, 7 grams of fat, 24 grams of carbohydrates, 3 grams of dietary fiber, and 3 grams of sugar. Minerals and trace elements found in it include 120 mg of calcium, 28 mg of iron, 195 mg of magnesium, 118 mg of phosphorus, 1363 mg of potassium, 1048 mg of sodium, and 2 mg of zinc. [6]

The vitamins found within spirulina include thiamin, riboflavin, niacin, folate, vitamin B6, C, A, E, and vitamin K.

It is widely regarded as one of the highest sources of protein. It contains around 18 out of the 22 amino acids that the human body needs. It is also a good source of vital micronutrients, such as beta-carotene in vitamin A, and minerals such as zinc, calcium, magnesium, iron, and phosphorus.

Closer examination of spirulina revealed that the spiral-shaped, blue-green algae had thinner cell walls or cellulose compared to its plant cousins. Also, the cell wall is composed of mucopolysaccharides, which are complex sugars. Thus, even the cell wall in it can be digested, unlike the cellulose in plants. It is also beneficial for probiotic bacteria, such as lactobacillus, which lives inside our digestive system. [7]

Mercury poisoning is a concern for most animals, including man. Inorganic mercury concentrations are found mostly in kidneys and they are the worst affected organs. Studies have shown that spirulina significantly reduces the levels of mercury chloride-associated toxicity and renal damages caused by toxicity in mice. [9]

There have been several studies in the past couple of decades to determine the viability of spirulina against several types of cancers. It has also been of interest in for its chemoprotective and radioprotective potential observed in animal studies. [11] [12]

A 2014 study published in the Annals of Hepatology journal observed that owing to its tetrapyrrolic components and anti-oxidant activity, S. platensis exerted an anti-proliferative effect on pancreatic cancer. The study also noted its anticancer potential in case of liver and breast carcinogenesis. [13]

However, the use of this supplement is to be done cautiously as it needs to be supported by further clinical studies, to fully understand its positive effects in various scenarios. [14]

Having spirulina on a regular basis reduces inflammation. Recent scientific studies indicate this fact. When arthritic lab rats were given spirulina, arthritis-associated inflammation was reduced to a significant level in comparison to other controlled animals. [15]

The biliprotein phycocyanin present in spirulina possesses liver protection properties. Research showed that the effects on the liver, when pre-treated with hepatotoxic chemicals such as carbon tetrachloride, were reduced to a significant extent. This study showed that it helps in protecting liver cells from toxin damage. [16]

Research shows that spirulina helps in reducing ischemia, a condition wherein the blood supply to the tissues gets restricted. [17]

Spirulina is also beneficial for the control of bronchial asthma. A 2015 study has shown that administering it along with medication over the long term (daily for two months) can have a substantial effect on bronchial asthma. It is especially suitable in the case of mild and moderate asthma. [18]

Spirulina is a good source of antioxidants such as phycocyanin, which helps in the inhibition of COX2, hydroxyl, peroxyl, and free radicals. [19]

Rate this article
Average rating 4.0 out of 5.0 based on 57 user(s).
Read This Next:
Popular Articles