Castor oil is a tasteless and odorless vegetable oil that is extracted by pressing the seeds of the castor plant, scientifically known as Ricinus communis. The health benefits of castor oil include improved skin and hair care, and providing relief from rheumatism, menstrual disorders, and constipation. It is also said to help in inducing labor and improving lactation.

What is Castor Oil?

Castor oil is a vegetable, while castor seeds are rich in triglyceride, which is what makes them so valuable. They also contain small amounts of a toxin called ricin, which is potentially deadly in concentrated or excess amounts.

About half a century ago, unbeknownst to many, castor oil was being inappropriately used as a medical treatment for many children. It was extensively used as a laxative, and most peculiarly, as a medicine against almost all ailments in children and the elderly. These possible illnesses ranged from a cough, cold, and fever, to constipation, and indigestion.

Castor oil was also used to treat other problems, such as ingestion of any poisonous material, tapeworms and roundworms, and skin diseases. Stomach malfunctioning was believed to be the root of all the problems. So, a thorough cleansing of your digestive system would eliminate them altogether. All the medicinal uses of this oil were mostly due to it’s germicidal, toxic, purgative, and disinfectant properties. [1]

Let’s have a look at what this powerful oil can do for us; the health benefits of castor oil include the following:

Castor oil is thought to improve the lymphatic function, blood flow, and thymus gland health. Some think that this oil promotes the production of lymphocytes in the body which helps in fighting the toxins and other bacteria present in the body. Thanks to its ricinoleic acid content and immunity-boosting effects, it is often used as an effective purgative, thereby also preventing inflammation. However, more research is needed to confirm these presumed benefits. [2] 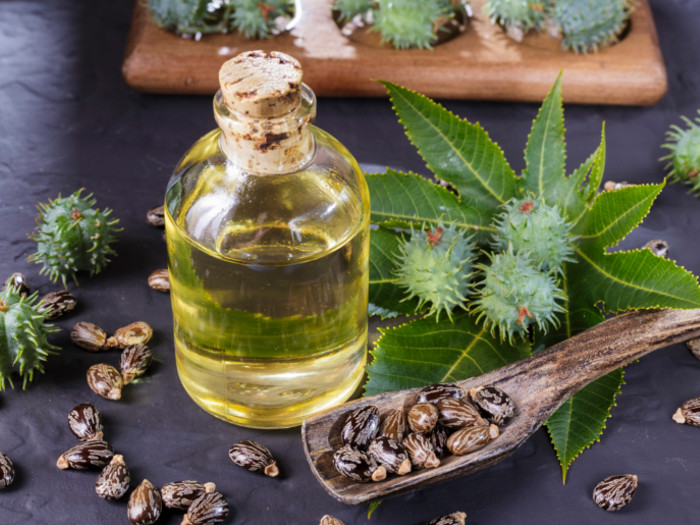 The National Heart, Lung, and Blood Institute, in a recent research paper, have connected a healthy lymphatic system with other organs of the body. As castor oil is thought to keep the lymphatic system healthy, it may also help in promoting circulation from the heart to the rest of the body through small capillaries and arteries. [3]

Castor seed oil contains undecylenic acid, which has germicidal and disinfectant properties. In folk medicine, it is often used for treating skin diseases and skin ulcers, particularly those which are caused due to bacterial or fungal infections. Castor oil is also used to protect burns and wounds from infections and is extensively used as a skincare agent as it helps in treating acne, pigmentation, and sunburn, and preventing blemishes and stretch marks, says a report published in the Advances in Food Science and Engineering Journal [4]. [5]

Castor oil for the skin may be used in a number of ways. If you are experiencing irritation or inflammation, clean and wash your face thoroughly with warm water, which will help open your pores. Then, apply a light layer of castor oil on the skin, or you can mix it in with any carrier oil, which is often easier. The best carrier oils are olive oil, almond oil, and coconut oil.

It is thought that castor oil helps in the balancing of hormones by absorbing the fat molecules in the body. Providing a better blood flow to the sexual organs may help in increasing the libido or sexual drive. By regulating the hormones, it may also reduce PMS symptoms, anxiety, and mood swings. Studies observing the effects of castor oil on libido are needed to confirm these beneficial outcomes. [6]

A study by Dr. Gary Rothberger of Winthrop University Hospital in Mineola, New York revealed that castor seed oil, which has been historically used for its amazing benefits to induce labor – may help in uterine contractions. This ability of castor oil is attributed to the presence of ricinoleic acid in it, which helps in activating the EP3 prostanoid receptors in the uterus. The small study conducted on this topic represents the first attempt to evaluate the medication. [7]

About four tablespoons of the tonic are believed to induce the beginnings of labor in pregnant women. Castor oil is also believed to help with constipation during pregnancy, as it is often used as a laxative. Always check with a medical professional before trying an alternative therapy, particularly with castor oil.

Castor seed oil is most widely used as a laxative (better to call it a purgative). The presence of ricinoleic acid helps in the digestion process by ensuring regular bowel movements and also promotes nutrient absorption. It is thus a very effective treatment for extreme cases of constipation, irritable bowel syndrome (IBS), cramping, edema, and leaky gut syndrome. It also helps in balancing the gut bacteria. [8]

Slows the Progression of Rheumatoid Arthritis

A 2015 study published in the International Journal of Innovative Research in Technology (IJIRT), suggests that castor oil helps lower the risk and slow the progression of bone problems like osteoarthritis, knee pain, and joint pain. The ricinoleic, oleic, linoleic, and other fatty acids found in castor oil are very effective in treating the symptoms of rheumatism, arthritis, gout, and joint pain. When used in a massage, they easily penetrate through the skin. It is also mixed with other medicines for rheumatism to facilitate their penetration and enhance their effects. It also helps with muscle soreness. [9]

The germicidal, insecticidal, and fungicidal properties of ricin and ricinoleic acid present in castor oil protects the scalp and hair from microbial and fungal infections, the two prime causes of hair loss. In addition to this, the fatty acids nourish the hair and prevent the scalp from drying by retaining moisture.

Castor oil’s therapeutic qualities are thought to help in naturally relieving backache and stiffness of the body.

Castor seed oil contains a toxin called ricin (a protein) which, if administered in very low dosages, acts as a germicidal substance. Due to this property, it is also used as a spermicide in spermicidal gels and lotions. [10]

Note: If you are pregnant and trying to induce labor, castor oil can be safe, but consuming too much of it can also induce early labor.

Ricinoleic acid, present in castor seed oil, is a natural emmenagogue thought to stimulate menstruation in cases of delayed, painful, or obstructed menses, according to Ayurvedic medicine. It also helps relieve pain during menstruation. [11]

Most of the substances, considered emmenagogues are also galactagogues by nature, meaning that they stimulate the secretion of milk. Castor oil, apart from easing and enhancing milk flow, is thought to also increase the quantity of milk due to the presence of fatty acids in it, according to Drugs and Database Lactation. However, the cold-compressed form should only be taken by a physician’s order, and in low doses to avoid any adverse effects on infants. [12]

The anti-inflammatory properties of castor oil may help in improving the symptoms of early cataracts, relieving dry eye symptoms, preventing eye infections, and getting rid of those unsightly dark circles beneath your eyes. [13]

There are many other alternative medicine benefits of castor seed oil, which include minimizing the factors that cause migraines, promoting good sleep, treating symptoms of colic among babies, preventing corns and cracked heels, and treating mouth sores and chapped lips.

You can use castor seed oil in a number of ways, depending on what health issues you are dealing with.

Castor oil can have a few side effects, including the following:

Where to Buy Castor Oil?

Castor oil can be purchased at a majority of grocery and home stores, including Target and Walgreens. Being a multi-purpose substance, many demographics require it for various health concerns and applications. You can buy castor oil at most health food stores, specialty cosmetic stores, and alternative health distributors.

What are the benefits of Jamaican black castor oil?

Rate this article
Average rating 4.1 out of 5.0 based on 350 user(s).
Read This Next:
Popular Articles