Some of the most important health benefits of lovage include its ability to improve the health of the skin, boost immune health, improve respiration, protect the kidneys, soothes digestion, prevents allergic reactions, lower inflammation, and help with menstruation.

Lovage may be the only member of the Levisticum genus, but this leafy perennial plant is extremely valuable in cultures around the world. There is even a bit of mystery involved in this plant, which has the scientific name Levisticum officinale, as scholars and botanists still debate hotly over its origins, between the Mediterranean region and southwest Asia. It has long been used in Europe and is highly sought after for its leaves, roots, and seeds. [1]

Depending on the intended use, various parts of lovage can be used in salads, soups and broths, as a spice, or even as a flavoring ingredient in beverages and alcohol. The high concentration of coumarins, limonene, camphor, and eugenols contribute to the impressive health benefits associated with this herb, and while it is not widely used around the world, it is particularly favored in Europe and Asia. Now, let’s take a closer look at some of its important health benefits. [2] 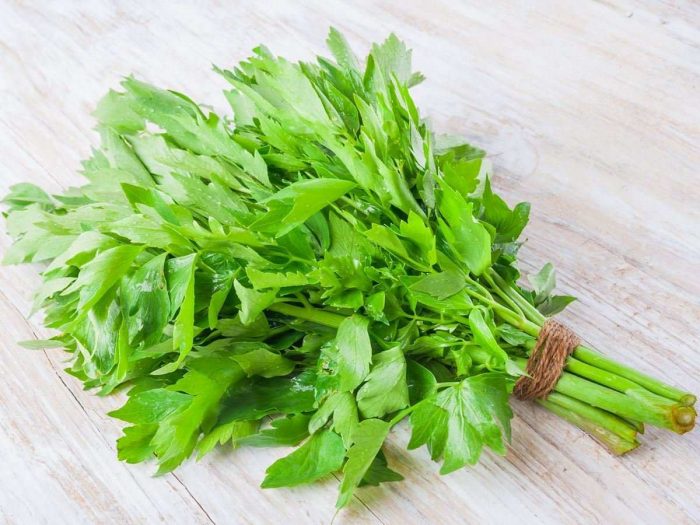 Lovage is a green, leafy herb with a celery-like aroma. Photo Credit: Shutterstock

Many of the health benefits of lovage relate to its anti-inflammatory and soothing nature, and the same is true for soothing the effects of allergens. Furthermore, it contains significant amounts of quercetin, which is a natural inhibitor of histamines. This will reduce the allergic response of your body, eliminating itchy eyes, runny noses, and other more serious allergic reactions. [3]

Good for the Skin

The soothing properties of lovage also extend to the skin. When the leaves are applied directly to the skin, or a salve is made, it can be very effective for reducing the symptoms of psoriasis and acne, leading to smoother, better-looking skin. The antioxidants found in it can also help to prevent wrinkles in some cases and increase blood flow to the surface of the skin, improving tone and appearance. [4]

If you are suffering from a respiratory ailment, lovage can act as an expectorant to clear out excess phlegm and mucus in your tracts. Furthermore, eucalyptol, one of the primary soothing agents found in it, can reduce irritation and inflammation in the lungs, promoting more rapid healing. [5]

Studies have shown that lovage has a significant effect on various microbes and foreign agents that can cause illness within the body. Although research is still ongoing, studies have found positive associations between lovage intake and a reduction in E. coli, Salmonella, and other dangerous infections. [6]

The anti-inflammatory nature of lovage makes it ideal for soothing upset stomachs and returning your gastrointestinal system to a neutral state. It can help to reduce bloating and excess gas by reducing irritation in your bowels and promoting healthy, normal movement in your colon. [7]

When taken at the beginning of a menstrual period, lovage can act to soothe many of the most severe side effects of menstruation, including cramps and bloating. There is also high nutrient density that makes it effective in keeping your energy and mood high during that more stressful part of the month. [8]

The natural anti-inflammatory nature of lovage makes it the perfect remedy for those suffering from conditions like gout, arthritis, and hemorrhoids. If you suffer from painful inflammation anywhere in your body, consume some lovage leaves or add this herb to your next dish – you might be surprised at the relief! [9]

Although the exact mechanism isn’t completely understood, lovage has been linked to improving kidney health. It acts as a strange type of diuretic, known as an aquaretic, which stimulates urination, but doesn’t lead to a loss of electrolytes. This is a much healthier form of urination if you are trying to detoxify your body without risk of dehydration, thereby boosting the health of your kidneys. [10]

There is only one consistent report of negative reactions from lovage, and it is a rather strange one. Some people have reported increased photosensitivity after regularly consuming lovage. For that reason, we would only recommend consuming a moderate amount if it becomes a regular part of your herbal regimen.

Rate this article
Average rating 3.7 out of 5.0 based on 27 user(s).
Read This Next:
Popular Articles