Think a burst of flavorful spices, with the right amount of heat to make it memorable, in combinations you probably haven’t ever thought of. From crusty burnt rice as a delicacy to stews that combine yogurt with meat, Middle Eastern cuisine is all that and more. The Middle East is a loosely defined region, arguably spanning over north Africa, Asia, and Europe. Known earlier as the Near East, the term covers a vast region with varying terrains, cultures, languages, and history. Middle Eastern cuisine is not a specific culture of food, but more of a convenient term to identify an array of closely connected food cultures under a single umbrella.

What is Middle Eastern Cuisine?

If you’ve had shawarma, hummus, falafel, or gyros, rest assured it was a cursory introduction to enigmatic vastness of the Middle Eastern cuisine. If you have been adventurous or curious, or both, Middle Eastern cuisine is a journey you should immediately embark on. There are multiple gateways to this. If you haven’t had a taste, a mezze platter is a good way to start. But you could dive straight in for the kebabs, or dolmas which are usually grape leaves stuffed with rice but could also be peppers stuffed with meat. If you want to put it to the sweet tooth test, it is a difficult choice between the baklava and the kunafeh. And that’s when you try to narrow it down. 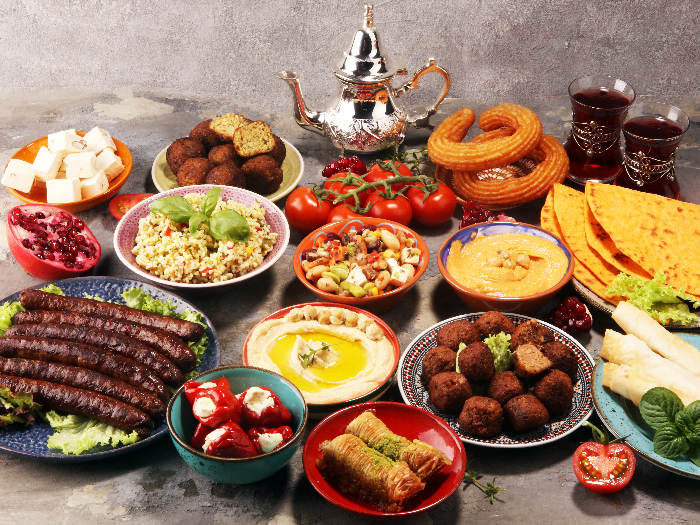 From crusty burnt rice to stews that mix yogurt with meat, Middle Eastern cuisine is all that & more. Photo Credit: Shutterstock

What to Know About Middle Eastern Cuisine?

Before we list down the best of Middle Eastern cuisine to leave your taste buds wanting more, here are a few things that are common throughout the food culture of the regions, almost across all the borders. Firstly, there is no pork. This mainly comes from religious preferences, but now is a common theme across the food scene all over the Middle East. While beef is available, lamb and mutton are widely used in traditional dishes. Chicken and fish preparations are also prominent in some traditional preparations. [1]

Secondly, alcohol does not make an obvious appearance on the dinner table. While the norm varies across regions, it is best to be cautious. While some sub-cuisines might specialize in the production of internationally acclaimed wines and others might have regional liquor specialties such as arak, some areas have strict restrictions on alcohol consumption.

Finally, there are several options for vegetarians. Middle Eastern cuisine does rely heavily on meat-based dishes, but that is not to say that the menu won’t be vegetarian-friendly. Even if you are looking for vegan options, you can take your pick for it is not limited to hummus and falafels.

But it is pretty unfair to box this magnificent food culture under any regular tags other than Middle Eastern cuisine. It defines the rich culture from where this food comes. At the same time it talks about a vast yet vaguely defined region with several types of boundaries and differences, all brought together before the world, and to itself, through food. [2]

Here are a few things from the Middle Eastern fare that we think you shouldn’t miss. 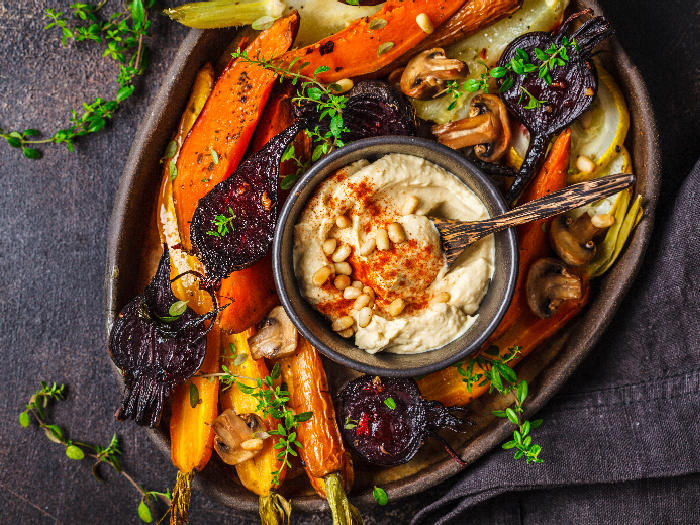 Yes, as repetitive as it sounds, don’t miss out on the creamy, healthy goodness that is hummus. The humble-looking paste is a delicious combination of chickpeas, tahini (sesame paste), garlic, olive oil, lemon juice, and some spices. It forms an integral part of any mezze platter, but it can also be used as a spread for almost anything. Hummus is not only vegetarian; it is vegan, and it is also nutritious. The region of origin of hummus is contested, but its increasing availability in almost all over the world speaks of its popularity. You can also make it at home. 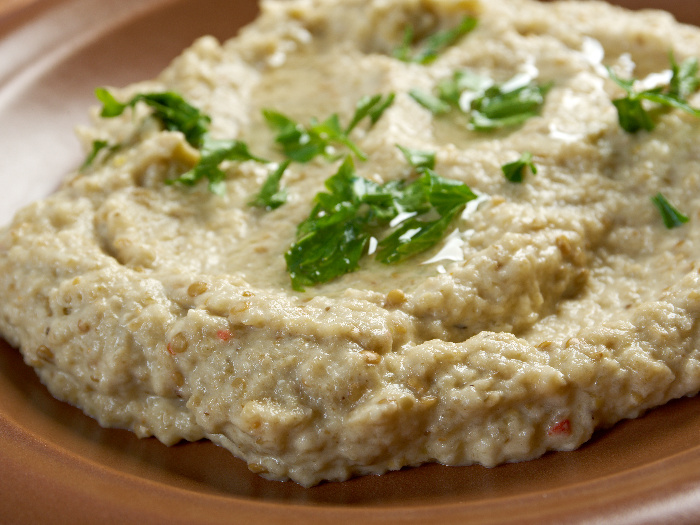 Did dips and spreads come to your mind when thinking about Middle Eastern cuisine? If you were to make a list, baba ganoush comes a close second for us. It is an eggplant-based dish, which is one of the most popular vegetables in the Middle East. Apart from roasted eggplant, it also includes tahini, garlic, and lemon juice, which bring it really close to hummus in terms of ingredients. However, this dip has a smoky flavor from the roasted eggplant. 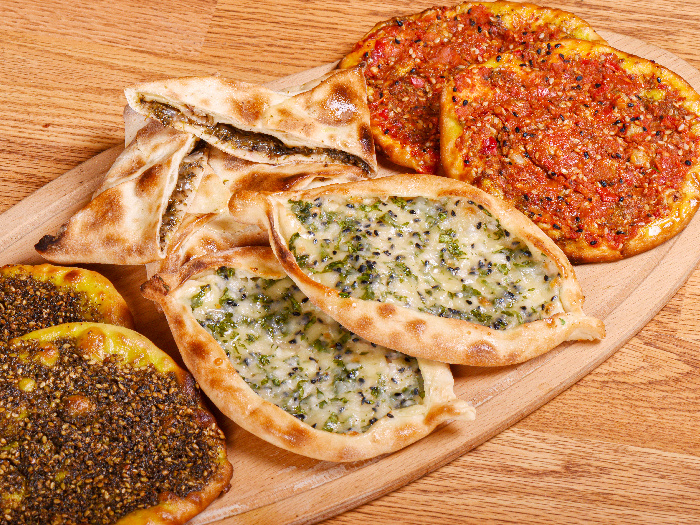 Varieties of manakish can be had for breakfast. Photo Credit: Shutterstock

The selection of Middle Eastern bread varieties is only getting started with pita bread. There are a lot of home-cooked and store-bought bread types that make up the carbohydrate section of a Middle Eastern meal. Manoushe is a delicious za’atar topped flatbread, usually served as breakfast. Depending on the region, it is also known as manakeesh or mankousheh. Other toppings could also include cheese and minced meat. 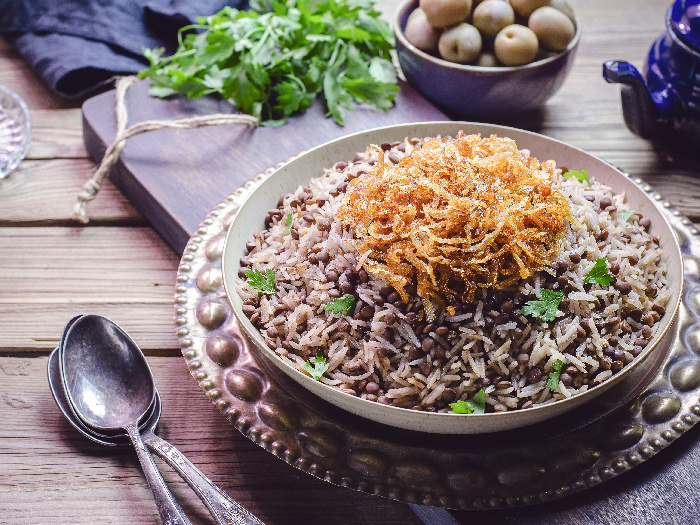 A combination of rice and lentils, mudardara is a bowl of yummy comfort. Photo Credit: Shutterstock

Looking for an addition to your list of comfort food? Here is a contender which could beat most of your favorites. Majadra, also called mujaddara, mudardara, or megadarra. It is a mix of rice and lentils cooked together with spices as per the region and the taste. Some versions also include groats, making it healthier as well as comforting at the same time. Top it with a heap of fried onions, and you have yourself a warm, healthy dish for cold, winter days. 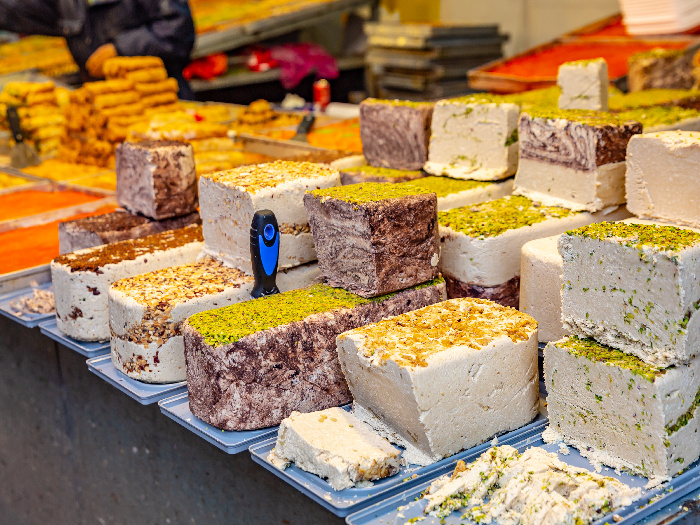 Different flavors of halvah in the market. Photo Credit: Shutterstock

The origin of halvah is contested, with claims coming from the Indian subcontinent, through Central Asia to the Middle East. But the Middle Eastern specialty is where you are assured of the versatility of tahini. Your sweet tooth is satisfied with this rich combination of sugar, tahini, nuts and dry fruits, and spices if you like. A day and a few more hours later, it evolves into a fudge-like consistency. You can enjoy various flavors of halvah available in local markets. 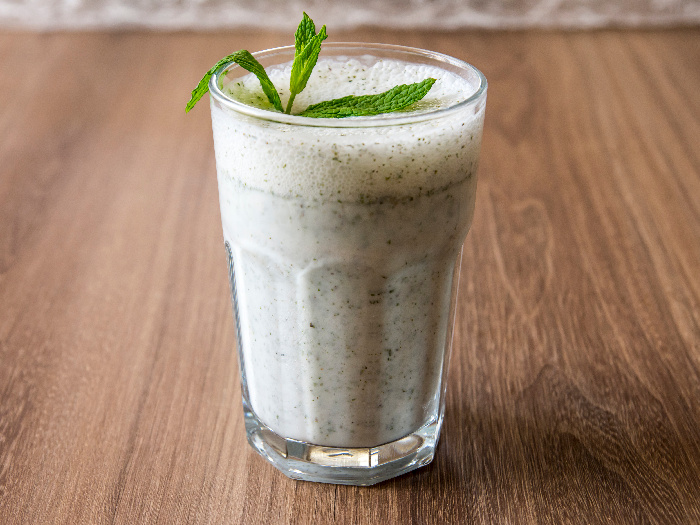 It would be remiss to not mention this burst of refreshment. A yogurt-based drink, doogh is also known as ayran and dhallë. While the traditional version is a cooling, savory summer drink, you can now also find a carbonated version in bottles. There are numerous versions of doogh available across the Middle East, and it is usually served alongside a meal of rice.

This cannot be an exhaustive list of the best or even the most popular dishes brought to the world by Middle Eastern cuisine. It is only a start. There is so much else that you shouldn’t miss – pilaf, sabzi, shwarma, shakshouka, baklava, labneh, and so much more.

Is there a Middle Eastern dish you think shouldn’t be missed? Do you have a favorite? Let us know in the comments below!