Don’t judge a book by its cover, goes a famous saying. If one were to see a monkfish, that adage would definitely strike home. Monkfish is far from what one may describe as pretty. With a toad-like face, a head that comprises most of its body and razor-sharp teeth, it may look somewhat unappetizing.  However, once caught, properly cleaned and cooked, it tastes divine. It is also one of the most nutritious fishes you’ll come across. So let’s take a look at the fish in detail.

Monkfish is a member of the scientific genus Lophius, and its original name is, Lophius Americanus/Piscatorious. It is mostly found all over the world, however, its predominant harvesting place remains the North Atlantic Ocean, covering the coastal areas of Norway to the Mediterranean region and then again from the Great Banks to North Carolina. It is also known as anglerfish, goosefish, bellyfish, depending on the region it is found in. While the British call it Monkfish, the French know it as Baudroie d’Amérique, the Spanish as Rape, the Germans as Angler, the Italians as Rana pescatrice, and the Japanese as Anka. [1]

An ugly appearance notwithstanding, monkfish is considered to be quite a delicacy. Given that it has got quite a mild and sweetish taste, many liken it to lobsters. The fish’s meat is dense, boneless, and firm. In fact, it is known as the poor man’s lobster. Typically, people consume the flesh from its tail as it tends to be melt-in-the-mouth good. In some places, even the liver is considered to be a delicacy. It is quite versatile and can easily blend with different sauces and gravies. You can make delicious monkfish recipes by adding them to soups, salads, pasta, curries, and the like. 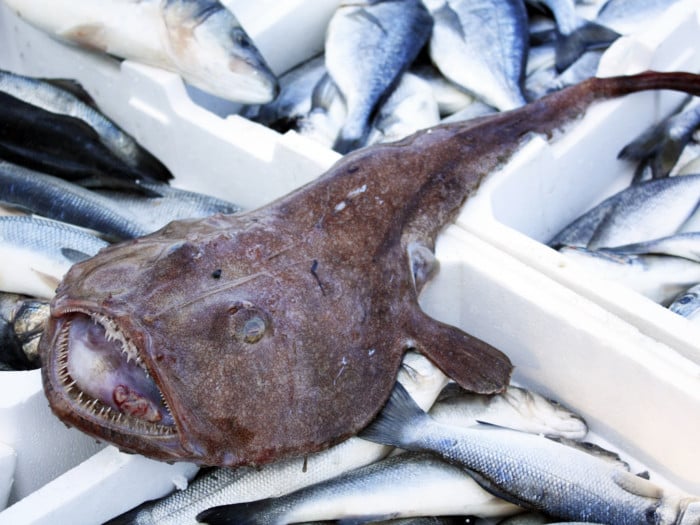 Monkfish has a mild taste and texture similar to lobster. Photo Credit: Shutterstock

Monkfish is a low-fat and low-calorie fish and is considered to be one of the tastiest and healthiest of fishes, contrary to popular belief. It is packed with minerals, vitamins, and good fats- all of which are necessary to maintain good health. The health benefits of the fish may include lowering the risk of cardiovascular diseases, maintaining good bone health, boosting immunity, strengthening muscles, improving cognitive functions and gut health as well as skin and hair. Let’s take a look at the health benefits in great detail.

May Reduce the Risk of Heart Diseases

Monkfish, like other fishes, are possibly rich in omega-3 fatty acids. According to a study published in the Tanaffos Journal, omega-3 fatty acids help lower bad cholesterol and reduce the risk of cardiovascular diseases. Furthermore, they may also help in lowering the risk of abnormal heartbeats (arrhythmias), which, in most cases, turn out to be fatal. [4] [5]

Vitamins are important constituents of our diet that have a major impact on the immune system. According to researchers from the Harvard Medical School, Boston, Massachusetts, USA, vitamin A has a significant effect on one’s immune response. Monkfish may contain this vital vitamin that not only boosts one’s immunity but also reduces any kind of inflammation in the body, thereby potentially lowering the risk of any kind of chronic disease. [6]

Monkfish contains calcium and phosphorous, both of which are very important in maintaining good bone health. According to a report published in the American Journal of Medicine, a severe deficiency of calcium and phosphorous in the body can result in osteoporosis and other bone-related issues such as osteomalacia. Thus, including the fish in your diet may ensure a relatively fast rate of bone formation, whilst keeping them healthy and strong. [7]

May Strengthen the Muscles

Physical activity and diet have a bearing on the skeletal muscles of the body that are subjected to wear and tear over the years. According to a study published in the Marine Drugs Journal, omega-3 fatty acids can influence the exercise and nutritional response of skeletal muscles, preventing any kind of aging-associated declines in muscle mass and function. Monkfish is rich in protein and omega-3 fatty acids, which together help in the contraction, coordination, and growth of the muscles in the body. [8]

Cognitive decline is an age-related risk. A study published in the Aging Health Journal states that vitamin E is a potential antioxidant that has the potential to cross the blood-brain barrier and positively impact the cell membranes. Monkfish is rich in Vitamin E, which according to research has been used in attempting to treat and prevent Alzheimer’s. Having said that, additional research is still needed to identify the holistic role of Vitamin E in the management of cognitive impairment. [9] [10]

The omega-3 fatty acids may be present in the fish and may facilitate digestion. A 2017 study conducted by Dr. Ana Valdes, an associate professor, at the University of Nottingham, UK states that omega 3 fatty acids can positively impact gut biodiversity. A gut with diverse and rich bacteria plays an instrumental role in maintaining a healthy body. [11]

May Protect Healthy Hair and Skin

Monkfish contains riboflavin (vitamin B2), which may play a major role in maintaining collagen levels – an essential component that maintains healthy skin and hair. In order to protect youthful skin and prevent wrinkles, collagen is needed. A deficiency of riboflavin can make one age quickly. Given that riboflavin can reduce any kind of skin inflammations, hair fall, and naturally slow other signs of aging, having monkfish as part of your diet can be quite beneficial. [12]

Word of Caution: While the aforementioned points are enough to tell you why consuming monkfish is beneficial to health, it would be advisable to consume it in moderation, and in some cases even consult a nutritionist. According to the American Heart Association, the benefits and risks of eating any fish depend on a person’s phase of life. [13]

The U.S. Food and Drug Administration has advised children and pregnant women to avoid consuming those fish, which have a high level of mercury contamination. Fishes that have a potentially high level of contaminants are generally the larger, older, predatory fish, and other marine mammals. That is why, it is advisable to ensure that the fish is properly cleaned, and sometimes tested before consumption. Moreover, the American Heart Association recommends eating fish, especially the fatty ones, two times (two servings) a week. So as long as we adhere to this, consuming monkfish or any other fish won’t be detrimental to health. [14]

Rate this article
Average rating 3.5 out of 5.0 based on 2 user(s).
Read This Next:
Popular Articles