Potato sprouts often appear when you store potatoes for a long time. There are a few questions regarding these vegetables; is it safe to eat sprouted potatoes and how do you prevent them from sprouting in the first place?

Potato sprouts are certainly not healthier than potatoes. When they sprout, the starch in them is converted into sugar. Research has suggested that if the main part of the potato is still firm, then it has most of its nutrients intact and can be eaten after removing the sprouted part. However, if the potato is shrunken and wrinkled, it should not be eaten. [1]

What about green potatoes? Green potatoes are a result of potatoes being excessively exposed to light. After being overexposed to light, the skin becomes green due to the formation of an alkaloid called solanine which is toxic even in very small amounts. This poison is found in the entire plant but the concentration is more in green potatoes and sprouts. And the consumption of potatoes with green skin or sprouts of the potato plant may cause poisoning.  So it is essential to remove these before eating a potato. It is always advisable to not touch or consume any unknown plant. It’s also important to wash hands after working in gardens. [2] 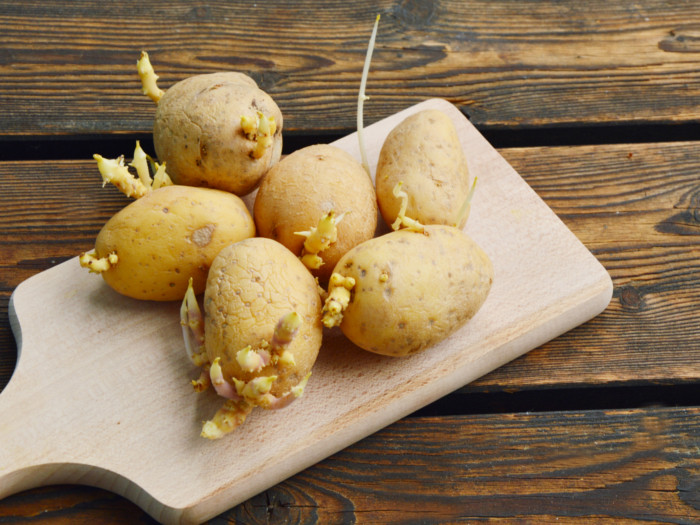 A sprouted potato is perfectly safe to eat as long as it is firm to the touch. Photo Credit: Shutterstock

Potato sprouts can be controlled using various techniques such as temperature control, moisture control, use of chemical inhibitors and use of various oils such as clove oil

Chemical inhibitors such as chlorpropham (CIPC)  and maleic hydrazide are useful in controlling and preventing potato sprouts.

Low doses of ionizing irradiation is another technique used to control potato sprouting. It also helps to increase the storage time of these root vegetables. [4]

With the increasing demand for organic potatoes, research is being carried out in a more organic way to control potato sprouts. The University of Idaho has reported that essential oils such as clove oil, spearmint oil, carvone found in caraway seeds, and mint and peppermint oils can be used for organic potato sprout inhibition. These can also be used during sprouting of seed potatoes to ensure a healthy crop. [5]

Naphthalene and ethylene gases are effective in preventing potato sprouts.

Potato sprouts can be inhibited temporarily by using hydrogen peroxide. Apart from these techniques, you should also ensure that you store potatoes properly. People often use the following precautions to minimize the formation of potato sprouts:

Ensure that potatoes are not stored in a humid place because moisture speeds up the sprouting process. On the other hand, potatoes should also not get dehydrated.

Ensure there is sufficient air circulation when you store potatoes. Keep them in a good quality basket.

Go save your potatoes right away!