There are times in cooking when you will need to use a parsley substitute, probably because of its unavailability. Parsley is a flavorful herb and if you fall short of it, dried forms of it can also be used. It is an extremely popular herb around the world, both in fresh and dried forms, but if you’re halfway through a recipe and realize you’re missing such a flavorful ingredient, don’t worry. In most cases, fresh forms of herbs are replaced with dried forms of the same herb, just in smaller amounts, but there are also other plants and herbs that can mimic the flavor and effect of parsley and are great parsley substitutes.

In some cases, you may be preparing a meal for someone with a known allergy to parsley, but you still want to achieve the same effect in the taste of your recipe. Regardless of the reason you need a parsley substitute, there are plenty of options to choose from. [1]

Best parsley substitutes are basil, chervil, cilantro, rosemary, and mint, among others.

Many people naturally turn to basil as a replacement for parsley due to the similarity of their appearance, but the flavors are notably different. Basil cuts through more blatantly in a dish, so if you are making a dish with a subtle spice balance, basil may throw off the end result. However, if you are preparing highly flavorful foods, such as Italian cuisine, the inclusion of basil may not be noticeable in exchange for parsley. [2] 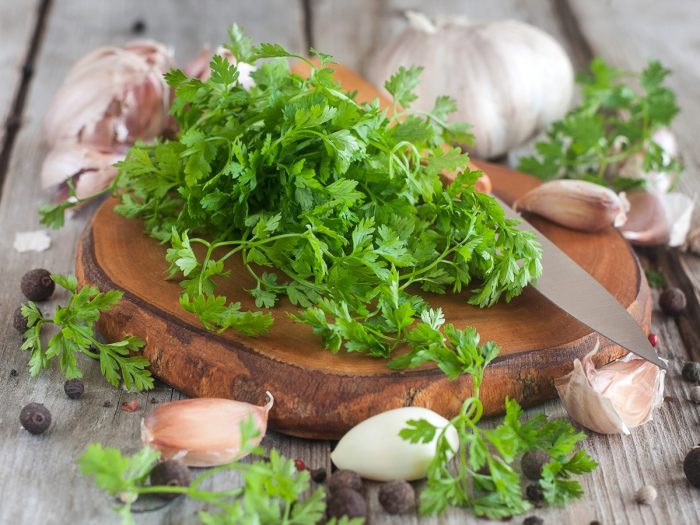 Chervil looks like parsley but has a milder flavor. Photo Credit: Shutterstock

One of the most popular parsley substitutes is chervil, as it also boasts a rather mild taste, similar to parsley. However, the sweetness of chervil is often compared to aniseed, a licorice flavor that can often blend in nicely with parsley. Chervil also belongs to the same family as parsley, and in Europe, is one of the most common substitutes for this in-demand herb. [3]

Although cilantro or coriander isn’t quite as bitter as parsley, this flavorful leafy herb is a popular parsley substitute. Cilantro is particularly good if you are trying to replace parsley as a garnish since its appearance is strikingly similar. For people who are adventurous in their herbal replacements, cilantro can be an interesting choice for a dish, but if you are worried about your food being overpowered, cilantro may not be the best choice. [4]

When you are replacing any fresh herb, the first thing you should try to find is a dry variety. In the case of parsley, most culinary experts say that the potency multiplies 3 times in the dried form, so if your recipe calls for 1 tablespoon of fresh parsley, use 1 teaspoon of dried parsley instead. The flavor match will be almost identical, although some slight changes occur when the herb dries. [5]

Oregano shares the same earthy flavor as parsley but is slightly warmer than parsley in terms of taste. It is also stronger as a spice, but can easily replace parsley in stews, soups, and curries. [6]

Known as one of the most aromatic herbs, with a pungent and unmistakable flavor, rosemary should only be used to replace parsley if you want a stronger bite in your dish, and are going to be cooking the spices, not just using them as a seasoning. As a whole, the flavors of rosemary and parsley are complementary, despite being quite different. [7]

Mint has a recognizably sweet taste and is slightly more pungent than parsley, so it could give savory dishes more of a sweet bite than you want. However, it has a number of similar health effects and works equally well as a garnish. In Middle Eastern and Asian cuisine, given the other spices being used, the replacement of parsley with mint won’t be as noticeable. [8]

Rate this article
Average rating 4.2 out of 5.0 based on 47 user(s).
Read This Next:
Popular Articles