8 Benefits and Uses of Oregano

Oregano is an important part of the Mediterranean diet. While it does make your recipes tasty, it also has many health benefits. It has antioxidant, anti-inflammatory, and antibacterial properties. Moreover, oregano may help improve digestion and fight cancer. It also has the potential to manage diabetes, relieve the symptoms of depression, and improve heart health.

Oregano is a popular herb and its scientific name is Origanum vulgare. It helps to enhance the flavor of your food and also boost your overall health.

Oregano is native to southwest Eurasia and the Mediterranean area. It has been a culinary ingredient and an alternative medicine option for thousands of years. Interestingly, it is closely related to mint as it belongs to the same family- Lamiaceae. For this reason, the two share many similar organic components and have many of the same health benefits.

The leaves of oregano are the most commonly used part of the plant. Its taste ranges from bitter, zesty, and astringent to sweet and mild. The flavor depends on the climate it grows in. The aroma and flavor of the herb are better in its dried form rather than the fresh one.

Aside from being used as an herb, it is also available in other forms like essential oil and capsule. Oregano oil is an extremely concentrated form of oregano and as it is very potent, it should always be diluted.

Oregano is packed with some interesting and healthy nutrients. A teaspoon of dried oregano leaves contains protein, fiber, and carbohydrates. It is a good source of minerals like calcium, magnesium, phosphorus, potassium, and iron. It contains many other nutrients and compounds like vitamin K, lutein, zeaxanthin, beta-carotene, and folate.

The essential oils in oregano contain terpenes like thymol, ocimene, carvacrol, limonene, caryophyllene, and terpinene. These compounds have antioxidant and anti-inflammatory properties.

The health benefits of oregano include:

Oregano is a rich source of a compound called carvacrol. It is also found in many aromatic plants like thyme, bergamot, and pepperwort. Research suggests that it has therapeutic benefits and it has been used in folk medicine for many health conditions.

Multiple studies show that carvacrol has antioxidant, anti-inflammatory, and antimicrobial properties. It also helps in fighting diseases like cancer and food-borne illnesses.

According to a study conducted by researchers at the College of Korean Medicine, β-caryophyllene oxide, a sesquiterpene, present in the essential oils of certain plants including oregano, may have potential as a part of anti-cancer treatments.

Experiments suggested that this component of oregano inhibited cancer cell growth, according to research published in the journal Molecular Carcinogenesis in 2014. 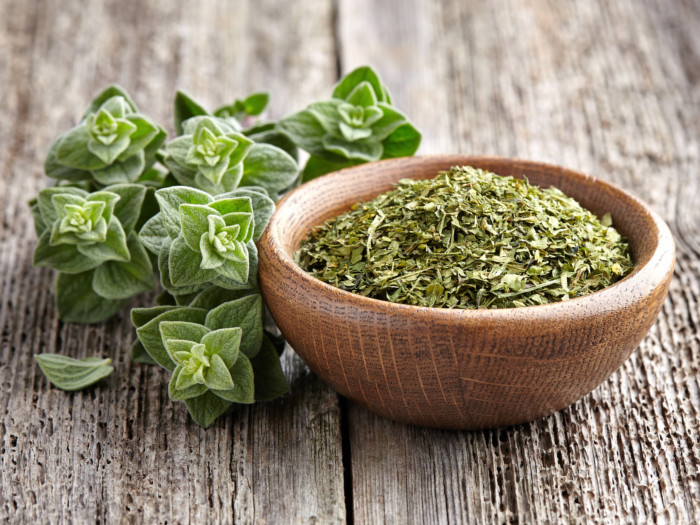 Oregano has antibacterial properties. Research published in the Process Biochemistry journal suggests that these properties are due to the presence of thymol and carvacrol in the herb. These compounds can help defend the body against a wide range of bacteria that can affect the skin, gut, and other parts of the body.

Oregano is also a slightly stimulating agent, which can increase the production of white blood cells and speed up the metabolism, resulting in the faster recovery of common illnesses.

A teaspoon of oregano contains about 0.5 grams of fiber. Although it’s a small amount it can have a major impact on your digestive system.

Fiber is an essential element of a healthy digestive system, as it can increase the bulk of your stool and stimulate peristaltic motion, which moves food through the digestive tract and excretes it efficiently. Also, fiber helps maintain the health of the gut and increases nutrient uptake, so the food you eat does more for you!

A 2006 study published in the Asia Pacific Journal of Clinical Nutrition states that oregano is a natural form of omega-3 fatty acids, the beneficial type of cholesterol that improves your heart health. Furthermore, omega-3 fatty acids help rebalance your cholesterol levels and reduce inflammation in the cardiovascular system, thereby helping to prevent atherosclerosis, heart attacks, and strokes.

According to a 2017 study published in the Plants journal by a team of Mexican researchers, herbs like oregano contain flavonoids and phenolic acids that help to alleviate inflammation-related diseases, respiratory and digestive disorders, headaches, rheumatism, diabetes, and others.

Thanks to B-vitamins and its unique organic components present in oregano, it may help boost metabolism, making the body feel rejuvenated and energized. The increase in circulation, due to the presence of iron and increased levels of hemoglobin, helps to fully oxygenate the cells and muscles of the body, thereby increasing energy and strength.

It is used to flavor everything from soups, sauces, and curries, to meat dishes, pizza, pasta, vegetables, and even salads. Simple ways to use oregano are mentioned below.

Word of Caution: People who are allergic to mint and other herbaceous perennial plants may experience some discomfort while eating or touching oregano. It is not commonly known as an allergenic substance. Also, the symptoms of an allergic reaction to oregano are very mild.

So toss some oregano into your next meal and reap all of its health benefits.