If you are looking for a unique form of whitefish, pollock fish can be an excellent option, thanks to its impressive nutrient profile and ready availability in many different markets. It provides many benefits which include skin care, weight loss, and has anti-inflammatory properties, among others. However, before adding a new type of fish to your diet, it is critical to understand where it comes from, what it contains, and what potential health benefits it can deliver.

What is Pollock Fish?

Pollock is the name commonly associated with two different species of marine fish, known as Pollachius pollachius and Pollachius virens, respectively. These two species are commonly interchanged but are also widely known as coley, European pollock, and Boston Blue. Pollock fish can weigh as much as 45 pounds and maybe 3-3.5 feet in length. In most fish markets, you will find this fish labeled as Alaskan pollock, although this is also known as Walleye Pollock. A majority of pollock fish are caught in the northern Pacific Ocean. It is a whitefish with delicate flesh, similar to salmon, that is flaky and light when consumed. [1]

There are countless ways to prepare pollock fish, ranging from full filets of fish to fish sticks, and as an ingredient in ceviche and other protein-rich salads. While some people dislike the flavor of pollock, it remains one of the top five fish species harvested and distributed in the United States. This fish has become particularly popular with vegetarians due to its unusually dense nutrient profile, even in comparison to other “healthy” fish. 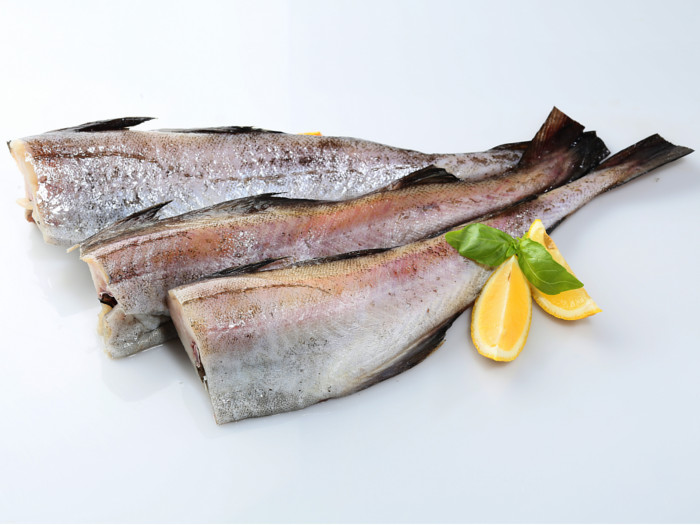 Pollock is a good source of lean protein and low in saturated fat. Photo Credit: Shutterstock

Pollock fish contains a rich source of protein providing 40% of daily required proteins per 6-ounce serving. This fish also provides notable levels of B vitamins, selenium, and phosphorus, as well as lower levels of zinc, copper, iron, calcium, potassium, and magnesium. Perhaps most importantly, there are quite a few omega-3 fatty acids found in this fish, which have numerous healthy effects on the body. [3]

There are many important health benefits of pollock fish, such as improving skin health, managing diabetes, lowering cholesterol levels, reducing inflammation, stimulating circulation and potentially preventing cancer, among others.

Some of the monounsaturated fats present in pollock fish, particularly omega-3 fatty acids, are known to be anti-inflammatory in nature and can help to improve the appearance and health of the skin. This can be beneficial for age spots and blemishes, as well as inflammatory conditions affecting the skin. [4]

Compared to other sources of meat and protein, pollock fish is notably low in calories, but it is rich in other minerals, nutrients, and fatty acids. More importantly, it is high in protein, which can increase metabolic speed and help with burning calories. [5]

People often overlook B vitamins, but they play key roles in everything from the metabolic rate of the body to the strength and durability of the hair. If you are suffering from dandruff problems, split ends or hair loss, adding pollock fish and its high level of vitamin B12 is a good choice. [6]

Pollock fish are high in vitamin B6, as well as selenium, both of which have been linked to lower cholesterol levels and a reduced risk of coronary heart disease. Selenium also acts as an antioxidant, which can help prevent damage and oxidative stress in the arteries and blood vessels. Two of the omega-3 fatty acids found in pollock fish are also known to lower triglyceride levels and elevate “good” cholesterol levels in the body. [7]

A number of B vitamins, including niacin and vitamin B6, are noted for reducing inflammation within the body. The omega-3 acids and other antioxidants in pollock fish are also able to treat inflammatory conditions, such as arthritis, gout, headaches, and migraines, as well as gastrointestinal distress. [8]

High levels of protein, vitamin B6, selenium, and phosphorus play an important role in protecting our cognitive abilities. These nutrients are all present in Pollock fish and can help neutralize free radicals that affect the cognition, while also sharpening your concentration and retention skills. [9]

Selenium and Vitamin B2, as well as other antioxidant compounds found in fish such as pollock fish, can help to reduce your risk of cancer. Research has specifically been done on the role of selenium and vitamin B2 in prostate cancer and colorectal cancer, respectively, but the free radical-fighting potential likely extends beyond those two types. [10] [11]

Anecdotal research points to pollock fish being an excellent aphrodisiac and stimulant substance for reproductive health. It is known to increase fertility due to its positive effects on hormone production and metabolic processes in the body. [12]

The level of mercury in fish is one of the biggest concerns for people who regularly eat fish or those who try new types. Fortunately, pollock fish is considered to have one of the lowest mercury levels of most commercial fish varieties. King mackerel, orange roughy, swordfish, and marlin have notoriously high levels of mercury, which can cause serious damage to the nervous system. Pollock fish, on the other hand, is considered by governmental agencies and marine experts to be completely safe and has non-toxic levels of mercury. [13]

While the taste of this fish may turn you off to the idea of eating it, the level of mercury shouldn’t be a concern.

Despite not having a dangerous level of mercury, there are some potential side effects of eating pollock fish, namely allergic reactions. Fish allergies are quite common, and in many cases, may be restricted to a single type of fish. There are numerous reports of nausea, vomiting, skin inflammation, hives, and swelling of the mouth and throat from those who have consumed this fish for the first time. The most important thing for fish allergies is to avoid that specific type of fish, as these allergies can result in breathing difficulties and even death.

Rate this article
Average rating 4.3 out of 5.0 based on 64 user(s).
Read This Next:
Popular Articles