Some pregnant women eat shrimp, while others don’t, so it is important to understand any safety concerns, as well as the potential benefits!

Shrimp is a general term that describes thousands of different species of decapod crustaceans, most of whom belong to the Dendrobranchiata or Caridea taxonomic groups. Due to their abundance and impressive nutrient composition, they are also a very important form of seafood in many parts of the world. However, there have long been concerns about pregnant women eating seafood, particularly when it is raw, for fear of heavy metal toxicity or foodborne illness. [1] [2]

Fortunately, pregnant women can eat shrimp, because it is generally classified as a low-mercury seafood, as opposed to high-mercury foods like mackerel, swordfish or shark. In fact, not only is it safe to eat shrimp while pregnant, but it can even provide some extra nutrition and a few surprising health benefits. 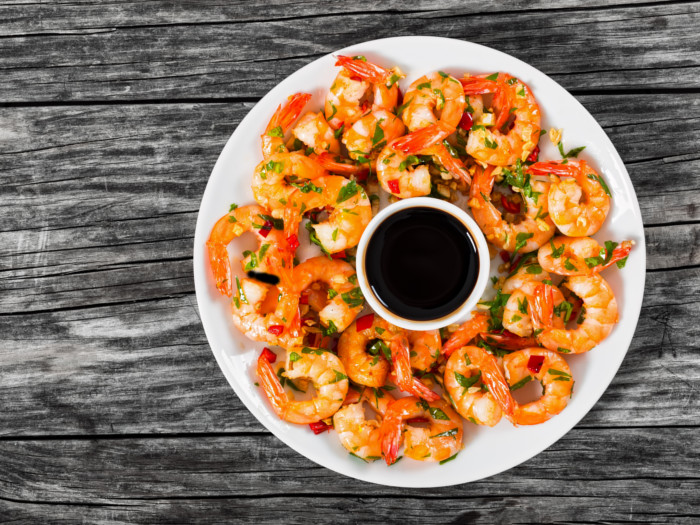 Shrimps can be eaten in a lot of different ways, such as with soy sauce, honey dip, creamy parmesan, and rice and beans. Photo Credit: Shutterstock

Benefits of Eating Shrimp When Pregnant

When pregnant women eat shrimp, they are increasing their intake of omega-3 fatty acids, as well as various amino acids, proteins, and other nutrients. Shrimp species are typically high in selenium, and also contain significant levels of iron, vitamin B12, phosphorus, iodine, choline, and copper. This is in addition to being an excellent source of protein. With such a diverse range of nutrients, eating shrimp while pregnant may help to ensure the normal growth and development of the fetus. [3] [4]

With omega-3 fatty acids in such high supply, shrimp can also help to increase heart health by lowering LDL cholesterol levels and increasing HDL cholesterol. This can lower your risk of atherosclerosis and high blood pressure, which pregnant women often experience. The minerals found in these crustaceans will also help to protect the immune system, as well as ensure healthy bones and teeth. [5]

Can You Eat Raw Or Undercooked Shrimp?

Yes, you can eat raw or undercooked shrimp, provided it is from a reputable and safe source. The most important thing when it comes to shrimp is actually the freshness; frozen shrimp that is defrosted and then cooked is actually at a higher risk of containing any foodborne illness. Since shrimp is also a rather delicate seafood to cook, it is better to undercook it than overcook it, as it will become hard and rubbery. People eat raw shrimp all around the world, and while there is a risk of the food containing bacteria, cooking the shrimp for a short time should be enough to cleanse it. [6]

How to Eat Shrimp?

There are many ways to eat shrimp, including boiling, microwaving or sautéing, but you should also know how to clean and prepare shrimp before eating it.

From there, you can rinse the shrimp and refrigerate them, or use them immediately in your cooking.

Which Shrimp is Safe to Eat?

Some shrimp are safer to eat than others, such as pink shrimp and US-farmed shrimps, among others.

Rate this article
Average rating 2.5 out of 5.0 based on 2 user(s).
Read This Next:
Popular Articles