The use of red yeast rice, either in culinary applications or for medical purposes, can offer multiple impressive health benefits.

What is Red Yeast Rice?

Red yeast rice is a form of rice that has been overgrown by the mold species, Monascus purpureus, which happens to be red in color. In use for more than 2,000 years, this type of rice was popularized in China and Japan. Even today, it is primarily available in those regions. It is often used to color different food preparations and has some unique health effects. It is sometimes administered purely as a medicinal remedy.

While many people shy away from consuming it, this particular strain doesn’t pose a threat to humans when consumed in moderation. This type of rice remains a staple in some parts of the world, and its popularity continues to increase in America and other nations with large populations of Chinese and Japanese immigrants. [1] 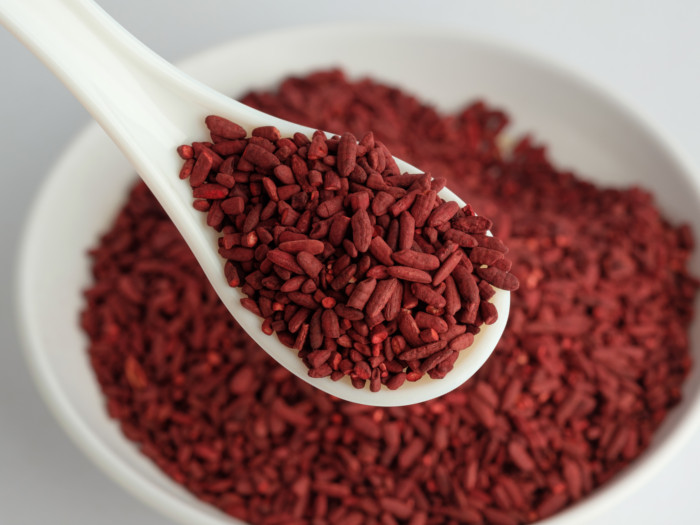 There are many benefits to eating red yeast rice, including its ability to lower cholesterol, work as an anticancer agent, stimulate bone growth, and prevent inflammation, among others. [2]

By reducing cholesterol levels, you can balance blood pressure and eliminate undue strain on the cardiovascular system. This can lead to a much lower risk of coronary heart diseases. [3]

This form of rice has been of interest to researchers for understanding its potential to be effective in the treatment of several conditions, including cancer. While its full extent as an agent in the anticancer treatment has not yet been proven, research in this direction suggests that it might prove useful in inhibiting prostate tumor growth. [4]

Studies have also suggested that apart from monacolin, the presence of other anticancer elements has also been detected in red yeast rice. [5]

The statin-like compounds found in these rice products are not only known to lower cholesterol but also to soothe inflammatory reactions from the immune system. This will help prevent chronic diseases and lower your risk of common infections. [6]

There are correlations between the consumption of red yeast rice and the levels of bone density, as well as the risk factors for osteoporosis. It can help in improving bone health and prevent diseases. [7]

Metabolic syndrome affects people across the world and is often a comprehensive set of conditions that include diabetes, high blood pressure, obesity, and high cholesterol. Research has shown that red yeast rice is able to prevent some of the key risk factors for this syndrome.

Eating any type of rice can help you lose weight, as it is notoriously filling, yet nutrient-dense, but red yeast rice is particularly effective, as it can help stimulate the metabolism and also lower cholesterol levels. Excess cholesterol can increase your risk of obesity, as it is often associated with sedentary life and other poor lifestyle choices. [8]

There are quite a few uses for red yeast rice, both traditionally and in modern times. The two main forms, however, are in culinary applications and for traditional medicines.

If you are cooking with red yeast rice, you can make many meals and beverages, such as Peking duck, red rice vinegar, sake, and rice wine. The flavor isn’t particularly different from normal rice, but it will affect the color of these foods and liquids.

Red yeast rice is highly sought after because of certain cholesterol-lowering compounds found in the rice following the addition of the yeast. The three main types of red yeast rice include zhitai, cholestin (HypoCol), and xuezhikang. The substance that the yeast produces when combined with the rice is called monacolin K, which has now been popularized in the pharmaceutical world as lovastatin. This is a very common cholesterol-lowering ingredient in medications. However, for thousands of years, this substance was used before any of these chemical details were known! [9]

Despite the benefits of red yeast rice, there are also some potentially serious side effects that should be considered, such as kidney issues, liver disease, drug interactions, and complications with pregnancy.

Rate this article
Average rating 4.0 out of 5.0 based on 39 user(s).
Read This Next:
Popular Articles