How to Make Rosemary Tea & Benefits

Rosemary is one of the most revered herbs throughout our history. It was believed to contain powerful medicinal benefits with almost magical powers. Now science is telling us that the powerful bioactive compounds in the herb may indeed give it potent medicinal properties, from dealing with hair loss to managing chronic conditions like diabetes and Alzheimer’s. Rosemary tea is one of the most convenient ways of taking the herb.

What is Rosemary Tea?

Rosemary tea is made by brewing the leaves and stem of the rosemary herb, scientific name Rosmarinus officinalis. Native to the Mediterranean region, this herb is one of the most popular in the world for culinary usage and has been used in natural healing for thousands of years. Many of the impressive health benefits of rosemary tea come from caffeic acid and its derivative rosmarinic acid. It also contains salicylic acid, potassium, and various antimicrobial, antibacterial, and antioxidant compounds.

How to Make Rosemary Tea?

Rosemary tea can be made very easily with a few sprigs of rosemary herb, hot water, and a dash of natural sweeteners, such as honey or sugar. Unlike many herbal teas that require only the leaves to be steeped for a tea blend, rosemary tea is made by steeping both the leaves and the stems of rosemary. This tea can be made with either fresh or dried leaves, and can even be made through powdered leaves, although this is less common.

If you allow the tea to steep for over 10 minutes, it will not only ooze out more of the healthy oils and nutrients but also make the tea stronger and give it a bitter taste. If you use a fresh sprig of rosemary tea, you won't need to filter it as you will automatically leave the rosemary needles on the stem before adding it to the boiling water to brew it. On the contrary, if you use dried rosemary, ensure that you don't use more than a teaspoon of the tea leaves for every cup of boiling water.

Drinking rosemary tea is potentially helpful for people who are suffering from Alzheimer’s, dementia, arthritis, chronic pain, hair loss, anxiety, stress, depression, inflammatory bowel disease, and a number of skin conditions. Rosemary tea has a lot of benefits to offer, some of which are listed below;

The compounds found in rosemary tea are well known to improve the appearance of the skin, especially in preventing UV induced damage thanks to their antioxidant and anti-inflammatory properties. A review on plants used to treat skin diseases, published in Pharmacognosy Reviews, explained these benefits of rosemary in detail. Apart from UV damage, rosemary was also effective in treating acne.

Rosemary tea is known as a stimulating substance for the circulatory system because it has anticoagulant properties, similar to aspirin. This can improve the flow of blood through the body. This can help prevent excessive blood clotting that can lead to strokes and heart attacks.

Rosemary has always been associated with remembrance. Research now tells us that the herb itself has benefits that go beyond its symbolic use. Multiple studies have shown that rosemary could improve cognitive function, particularly memory. It could be a particularly useful herbal remedy for people with Alzheimer’s. A 2018 study, published in the Journal of Pharmacology, found significant effects of rosemary water on cognition. It was particularly beneficial for brain activity associated with blood flow. The study showed that it could improve memory by up to 15 percent.

The antispasmodic and carminative properties of rosemary tea make it ideal for people suffering from diarrhea, bloating, and abdominal cramping. This herbal tea was used to clear up digestive issues for generations and may also improve nutrient uptake by relieving inflammation in the gut. Research published in the Journal Research in Pharmaceutical Sciences indicates that rosemary extract may be effective in treating inflammatory bowel diseases. 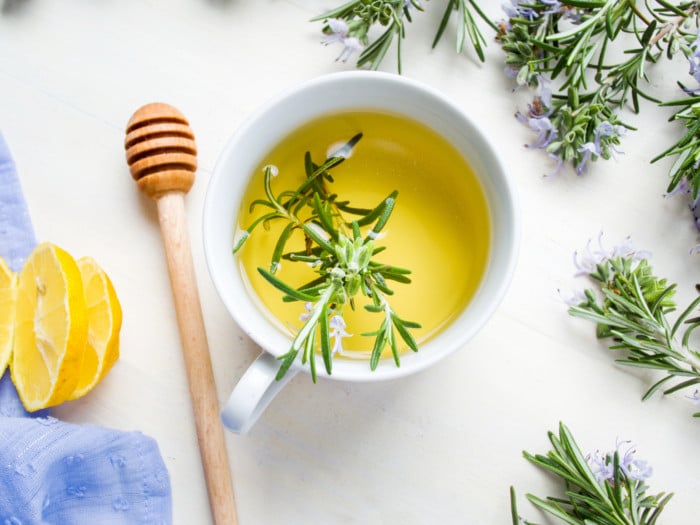 Rosemary is an evergreen herb used as a spice in ethnic cuisines. Photo Credit: Shutterstock

One of the key ingredients of this powerful tea is carnosic acid. Research has shown it to reduce the levels of nitric acid in the body that can be a trigger for inflammation. In combination with other antioxidant and anti-inflammatory compounds, this can potentially help people suffering from many conditions associated with inflammation, including arthritis, headaches, muscle pain, joint disorders, hemorrhoids, and hypersensitivity to allergens.

The pain-relieving qualities of rosemary tea are well known and are largely the result of salicylate, which is a compound similar to aspirin. Whether you are recovering from an illness, surgery or injury, or in chronic pain, this tea may help relieve some of your pain. Although we don’t have a study on rosemary tea’s efficacy in treating pain, it was traditionally used for this purpose. An animal study has shown that rosemary oil extract can help alleviate pain without any side-effects.

Many people use rosemary tea to improve the health of their hair, but not by drinking it! You can use this tea as well as rosemary oil to scrub the scalp and hair, thereby helping to improve the nutrient content of the hair, and also potentially reducing dandruff. The antibacterial properties can keep skin conditions at bay and protect against hair loss.

Early research has shown that rosemary can improve the health and function of the liver, due to its free radical scavenging and reducing properties. This can help keep the liver healthy so it can continue to effectively eliminate toxins from the body.

Rosemary tea was traditionally used to soothe anxiety and stress, and helping people relax. An animal study has shown that caffeic acid, a major constituent of rosemary, has antidepressant properties. It can also help in relieving anxiety.

The polyphenols in rosemary can help in the management of type 2 diabetes. Although greenhouse varieties were found to contain a higher amount of polyphenols and flavonoids, commercially available rosemary was found to be equally effective as a concentrated source of potent bioactive compounds. A 2017 review collated different in-vitro and in-vivo studies to show how the bioactive compounds in rosemary extract can be a very effective tool in diabetes management.

However, keep in mind that rosemary can interfere with your blood sugar levels and can hence, interact with any diabetes medication you are on. It is best to talk to a doctor before you include rosemary tea as a means of diabetes management.

Drinking rosemary tea may help in protecting your vision from age-related damage. A study found that carsonic acid, a major constituent of rosemary, can protect the eye age-related conditions, like macular degeneration.

Rosemary is considered safe to use at the recommended dose. However, it can trigger allergic reactions in some people. Given the powerful volatile compounds in the herb, you should seek the advice of a certified dietician or a herbalist when taking it on a regular basis. It is best to start with a cup of tea to check your reaction. If there are no side-effects, you can take an additional cup a day. The Penn State Hershey Medical Center lists the side-effects of rosemary tea:

Rate this article
Average rating 4.0 out of 5.0 based on 579 user(s).
Read This Next:
Popular Articles