Finding the right vanilla bean substitutes can mean the difference between the perfectly flavored dessert and a poor attempt.

Vanilla bean substitutes are essential in the kitchen because with chocolate as the only possible challenger, vanilla is widely considered the most popular flavor in the world, as per research by Tsuneyoshi Kanisawa, Central Research Laboratory, Hiratsuka, Kanagawa. [1]

Unfortunately, vanilla is also the second most expensive spice on the market. If a recipe calls for the fresh vanilla bean, but you’re not trying to spend a fortune, or if you’re allergic to vanilla, you’re in luck, as there are several viable alternatives to this scrumptious spice.

Always available and reasonably priced, vanilla extract is the best vanilla bean substitute. Other substitutes include vanilla powder, almond extract, and maple syrup among others. Let us take a look at them below.

Made by soaking the beans in alcohol and water, the extract is dark brown and intensely aromatic according to a paper published in the Journal of Agricultural and Food Chemistry. One teaspoon of vanilla extract roughly translates to a single vanilla bean. While it’s a better financial alternative to fresh vanilla bean and can be used in recipes almost interchangeably, vanilla extract cannot be ingested by those with vanilla allergies. [2] 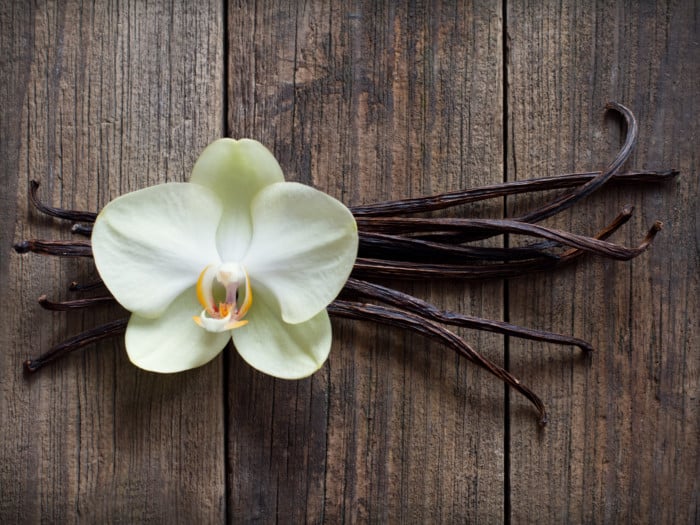 The vanilla bean isn’t just delicious and a flavor to enjoy in ice cream and desserts but also a nutritional powerhouse. Photo Credit: Shutterstock

Vanilla powder is a similar replacement option to vanilla extract, the only difference being that it’s a dry alternative and doesn’t contain alcohol. Therefore, it’s a better choice if you’re avoiding alcohol, cooking with high heat for extended periods of time, or working with a color-specific recipe. Made by drying and crushing vanilla beans, the vanilla powder should be used at a 1:2 ratio (teaspoons to beans) to standard vanilla beans. However, make sure that you use unadulterated vanilla powder, as many powders on the shelves contain artificial sweeteners. Again, this option is clearly unhelpful if you’re trying to correct for a vanilla allergy.

If you’re trying to avoid vanilla extract and vanilla powder, almond extract is your next best substitute in terms of flavor similarity. Since its price tag is comparable to vanilla extract, it’s generally only substituted in last-minute emergencies (or to avoid a vanilla allergy), even though its dependably strong nuttiness yields nearly the same results when baking. It should be used in an equal ratio to vanilla extract.

While this may sound like a strange replacement, maple syrup is a solid alternative to the vanilla bean as a flavoring, especially if you’re allergic to vanilla. Since it’s not quite as strong as vanilla, maple syrup should be substituted at a 1.5:1 ratio to vanilla extract. If you’re trying to avoid stickiness in your final product, this substitute should be avoided. For the purposes of some recipes, the difference will be negligible and only truly trained palates will be able to notice the substitution.