The health benefits of maple syrup may include a healthy heart and a healthier immune system. It may also have antioxidant properties that can protect the body from free radicals.

Several natural sweeteners might be preferred instead of the chemically prepared sugar. Many people prefer using honey instead of other natural products of the same type. However, maple syrup can be considered to be a better option given its low-calorie count, as compared to honey.

What is Maple Syrup?

Maple syrup is prepared from the sugary sap of the maple tree. The preparation involves tapping or piercing of trees to obtain this sap. These trees accumulate starch in their roots and trunks, especially in the period that precedes winter. The long accumulation of this starch can make it easy to convert it from the original state to sugar. During the spring season, the sugar rises and mixes with water to form a sap that is ready for collection or harvesting. [1]

Since the sap contains a high water ratio, it has to undergo processing for the water to evaporate, leaving behind the concentrated, thick syrup. This final product is arrived at through a heating process. The entire process might not involve any use of chemical additives, preservatives, or agents. The Native Americans are said to have discovered that sap from maple trees could be processed to make maple syrup.

As per USDA, the nutrients found in maple syrup might include energy, water, protein, fat, carbohydrates, and sugars. In terms of minerals, it may contain calcium, iron, magnesium, phosphorus, sodium, potassium, and zinc. Vitamins such as thiamin, riboflavin, niacin, and B6 might also be found in this syrup. [3]

Maple syrup is not only tempting and yummy but might also be a hoarder of ample health benefits. Let’s take a look at its beneficial effects on our body.

Maple syrup might have various antioxidants, 24 to be precise, that can help to protect you from many health conditions. Antioxidants are important for the body as they neutralize free radicals, which may cause various diseases. [4]

Studies also show that the darker versions of maple syrup can be higher in antioxidant content in comparison to lighter ones. So when you go shopping for maple syrup, look for a grade B type as it might be a darker variety. [5] [6] 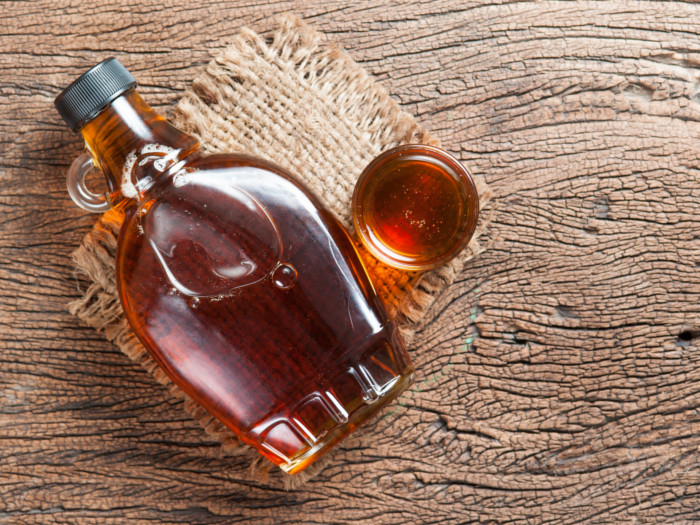 The health benefits of maple syrup might also include giving you a healthier heart. It is one of the body’s organs that is susceptible to different kinds of diseases such as stroke, atherosclerosis, and other cardiovascular conditions. Maple syrup may contain zinc and its consumption may protect and prevent various cardiovascular disorders. [7] [8]

Zinc can also enhance the performance of the endothelial cells by protecting them against damage due to the existence of excess cholesterol in addition to other oxidized lipids. The blood vessels are comprised of different components of the endothelial cells, which form the inner lining of these vessels. A low level of zinc exposes the linings to injuries, which in turn can affect the normal functioning of the heart.

The consumption of maple syrup might also help in maintaining male reproductive health. There are certain minerals such as zinc, in maple syrup, that can be useful for a healthy reproductive system, particularly the prostate gland. [9]

Reduction in the level of minerals may increase the risk of disorders. This is why it is advisable for men to always try to consume foods that contain the right amount of this mineral. Maple syrup could be one such food that is easy to acquire, readily available, and enjoyable as well.

A lack of zinc and manganese minerals could easily lead to a reduction in the number of white blood cells, which affects the response of the immune system. Supplementing these minerals is the only way known to restore their levels to the proper state.

Maple syrup might be a good source of both zinc and manganese, which can play a key role in strengthening the immune system. [10]

How to Select and Store Maple Syrup?

Select your maple syrup depending on the purpose you need it for. For use in foods like ice creams and buttermilk pancakes, you will require a lightly flavored maple syrup, which is golden in color. There is a dark, strong-flavored kind also available, which can be used to top waffles. It can also be used in place of chocolate sauce.

Maple syrup might be readily available all over the world. Be sure to store it in a cool place before opening, and keep it in the refrigerator after opening. Discard it if you see any mold in the syrup.

So far, Canada is the largest producer of maple syrup followed by the United States. The major advantage might be that one does not necessarily have to reside in these areas to buy this syrup. It may be stocked in stores all over the world.

The use of maple syrup is common and is incorporated into many meals. Therefore, it may be considered a key cooking ingredient in several food items.

Sweetener: Use maple syrup as a sweetener for tea or coffee.

Sweet Toast: Toast a piece of wheat bread and top it with some cut-up fruits such as banana and apple. Sprinkle cinnamon powder and then drizzle some maple syrup on the entire dish and enjoy it!

Rate this article
Average rating 4.0 out of 5.0 based on 223 user(s).
Read This Next:
Popular Articles