What is Wheat Beer

Wheat beer shares some of the basic ingredients with other types of beer, but there are a few unique differences that set this brew apart.

What is Wheat Beer?

Quite simply, wheat beer is a beer made with wheat! More specifically, it is a beer that is made with more wheat than barley. All beers start with fermenting grain and most of them use barley as the dominant grain. However, the use of more malted wheat creates a pleasantly sweet and tangy taste. Lager and ale are the 2 types of yeast used by brewers, and wheat beers are made with ale yeast. Many pounds of wheat goes into each batch, and a liter of beer can contain anywhere from 10-40 milligrams of gluten, so wheat beer is definitely not gluten-free for those with an intolerance or allergy. [1] [2]

Wheat beer is rich in calories and carbohydrates. A standard serving of a bottle or can of wheat beer (12 ounces) can contain anywhere between 170-180 calories and between 13-18 grams of carbohydrates. If you watching your calorie intake, then just remember that the higher the ABV, the higher the calories. Wheat beer does not contain significant amounts of fats, vitamins, or minerals. [3] 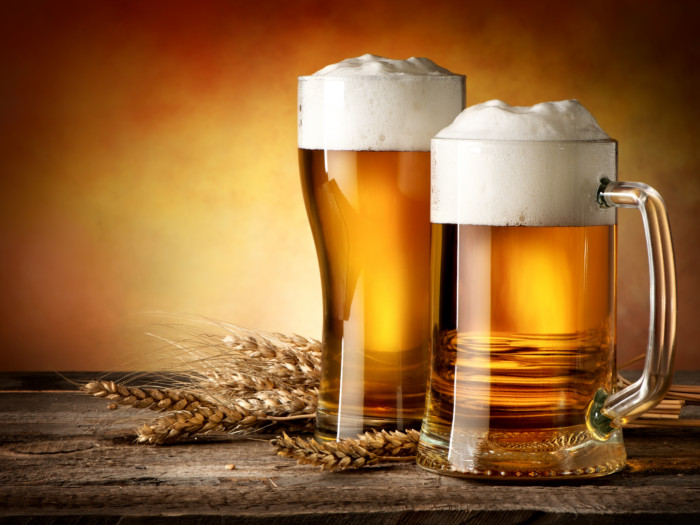 Wheat beer is any beer where a substantial portion of the grain used in brewing is wheat. Photo Credit: Shutterstock

The different types of wheat beer include Hefeweizen, Witbier or white beer, Berliner Weisse, and many more.

How to Make Wheat Beer?

You can make wheat beer at home with a home-brew kit. Pick any flavor you like and follow the instructions on the pack.

The ratio of grains and the type of yeast you use will yield wildly different results. Once you have a home-brew kit, follow the instructions on the kit.
0 from 0 votes
Print Pin Rate
Course: Alcohol
Cuisine: American, European
Keyword: Wheat Beer
Appliance: Kettle, Mesh Bag
Fermentation Time: 14 days
Author: Paromita Datta
[6] [7]

Make sure you drink in moderation!

Moderation in consumption is key. The risks involved with drinking excessive alcohol can be short term such as violence and injuries to long-term health risks such as chronic diseases. According to the Centers for Disease Control and Prevention, people who should not drink alcohol include women who are pregnant, individuals younger than 21 years of age, and people who are recovering from alcoholism or cannot control the amount they drink. Also, it should be avoided by people who are planning to drive or any other activity that required focus and skill. However, different countries have different rules on alcohol purchase and consumption. [8]

Rate this article
Average rating 1.0 out of 5.0 based on 3 user(s).
Read This Next:
Popular Articles