When people first read the name xylitol, the natural response is to think of it as a highly processed, chemically-based substance that couldn’t possibly be good for health. However, despite the somewhat misleading name, it is actually a very valuable tool for increasing our overall health.

Xylitol is a sugar substitute that is far better for your body than typical white refined sugar. It is often considered a “diabetic sweetener” and is basically as sweet as sucrose, but has 33% fewer calories. The reason that it is so important for diabetic patients is that it is not easily broken down and processed in our bodies like normal sugars/carbohydrates. Table sugar usually has a glycemic index of about 100, while xylitol ranges from 7-13. This means that the body can consume it without being constantly worried about fluctuating blood sugar levels. Xylitol belongs to the chemical group called “polyols”, more commonly known as sugar alcohols. Oddly enough, they are neither sugar nor alcohol, but their chemical structure resembles something in between.

Xylitol is obtained from the fibrous material of a number of common fruits and vegetables, as well as mushroom, berries, oats, corn husks, sugar cane, and birch. Xylitol can be created or extracted in a number of ways, including tapping a birch tree for birch sap, as well as allowing the isolated chemical to ferment the xylose and extract a high yield of xylitol. The hydrogenation of xylose also results in the conversion of the sugar aldehyde into a primary alcohol.

It was actually discovered back in the 19th century by chemists in Germany and France but didn’t come in a pure form until the 1930s. It was actually used during WWII as a substitute for sugar for many troops. Nowadays, it can be found as a replacement sweetener in chewing gum, toothpaste, mouthwash, and even some pharmaceutical medicines. The definition of xylitol as a “natural sweetener” comes under some debate because while it is derived from natural pulp sources, it must still undergo considerable chemical processing before it can be used as a pure replacement for normal white sugar.

As a sugar substitute, it contains no vitamins or minerals. It contains carbohydrates, calories, and a variety of organic compounds that affect the body. While it has long been used simply as a hyperglycemia-safe sweetener, recent studies have revealed many more important health benefits that it can confer on the body. 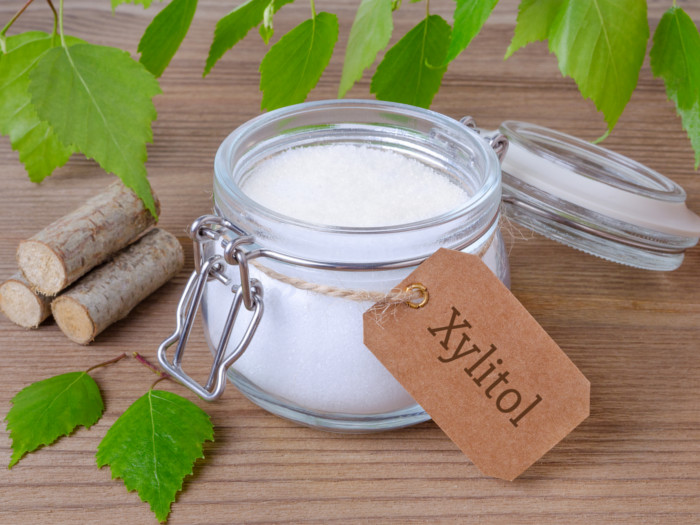 Health benefits of xylitol include its ability to control glucose and insulin levels in the body, manage diabetes, improve the health of gums and teeth, prevent overeating, help in weight loss efforts, and boost sinus health among others.

One of the most common afflictions of modern life is diabetes. Perhaps this is because of an increase in high-fat diets around the world, or globalization of fast food, or the generally high-paced life that doesn’t allow people to eat properly, but the problem remains. Therefore, any solution that can help manage diabetes, which is an inability of the body to properly maintain insulin and glucose levels throughout the body, is very important.

In a study published in the Diabetes Care journal, Dr. John Brunzell, Endocrinology specialist in Seattle, Washington, talks about the use of fructose, xylitol, or sorbitol as a sweetener in diabetes mellitus. Xylitol is a chemically processed form of sugar, meaning that the body cannot break down the carbohydrates into simple sugars and flood the bloodstream with it, thereby throwing off the balance of insulin and glucose. This means that diabetic patients can consume it in all of their normal foods without the fear of huge plunges or spikes in blood sugar levels. This is the oldest and most commonly used application of xylitol and has helped millions of diabetic patients around the world.

In a similar vein to the antibacterial qualities explained above, xylitol has been shown to be very good for oral health, as per a study by Tanzer J, University of Connecticut, US, cited in the International Dental Journal. Some of the world bacterial strains, like Streptococcus bacilli, can be neutralized by xylitol, thereby preventing infections in the mouth. Also, it has been found to reduce plaque, as well as caries and cavities. Numerous studies conducted around the world has shown it to be far better as a deterrent to cavities than normal sugars that are often found in toothpaste. Normal sugars increase acidity, which makes them counterproductive in mouthwashes and toothpaste, but xylitol is ideal for that purpose.

One of the basic chemical applications of xylitol is as an alkalizing agent. It increases the alkalinity and decreases the acidity in the body and mouth. Alkalinity is not a good situation for bacteria because it cannot grow in that condition. Therefore, it has been long praised for its ability to wipe out bacterial infections and colonies of all kinds throughout the body.

Xylitol has even been connected with a reduction in halitosis, which is a fancy word for “bad breath”. Halitosis is a bacterial infection that results in that foul smell that seems almost impossible to get rid of. Xylitol-based chewing gum is often recommended by doctors and dentists alike to get your breath back to its peak freshness!

One of the side effects of it is that it slows down the digestive process slightly, mainly in terms of the time the stomach takes to empty. This means that people who eat xylitol-based foods will feel full for longer, similar to the effects you have after eating a high-fiber meal. When your stomach is full, you are less likely to snack or overeat in a given meal, maintaining a healthy, balanced caloric intake and helping to aid in any dieting or weight loss efforts.

One of the most interesting effects of adding xylitol to your diet is its effect on ear infections. These commonly afflict children but are also known to affect adults as well. A study was conducted on about 850 children by researchers of Oulu University Hospital. The results showed that xylitol has antiviral and antibacterial effects, which are often the immune attackers that result in ear infections, but only 8-10 grams of it resulted in a 30% decrease in the prevalence of ear infections. Clearing up those painful conditions for children and adults is a recent development in the xylitol legend!

A study led by Dr. Peter Hwang, Department of Otolaryngology-Head and Neck Surgery, Stanford Hospital and Clinics, California, USA, shows that xylitol in water is a better agent to treat symptoms of chronic rhinosinusitis as compared to saline irrigation.

Many people have begun turning to Neti Pots to clear up their sinus infections and conditions in recent years. It has those important antibacterial qualities, so adding some of this replacement sweetener to your Neti recipe can speed up the healing process and keep your sinuses clear.

Although this is still a relatively new area of xylitol research, some researchers in Canada have shown promising results of xylitol increasing bone mineral density in various species. While human testing and studies are still underway, the signs look very promising for xylitol as a bone booster. This might be due to a higher absorption rate of other minerals when coupled with xylitol, but whatever the exact mechanism is, improving the strength, durability, and healing speed of bones is extremely valuable, particularly as we get older and begin suffering from common afflictions like osteoporosis. Most likely, this effect is due to the alkalizing effect of xylitol; acidity in the body actually leeches calcium from the system, making bones weaker.

Since xylitol is somewhat similar to dietary fiber in its basic function within the gut, it has also been found to have similar side effects as dietary fiber. Xylitol efficiently converts into short fatty acid chains that increase gut function and efficiency, thereby reducing stagnation in the digestive tract and reducing gastrointestinal conditions, including ulcers, constipation, diarrhea, and hemorrhoids.

Xylitol also slows down the growth of cancer, which may often result from Candida Albicans, a very serious yeast infection. It also eliminates the bacteria you may have picked up in certain foods, like H. pylori bacteria or other dangerous strains, and effectively neutralize them before they can do any real damage.

According to research published in the Nutrition and Cancer journal, xylitol is able to inhibit the proliferation of oral cancer cells.

Xylitol is a potent anti-inflammatory substance and is, hence, a very good option for lowering your risk of cancer. It is able to induce apoptosis in lung cancer cell lines, as confirmed by a 2015 research.

As mentioned earlier, the antibacterial and antiviral capacity of xylitol makes it an important weapon that fights against infections in various parts of the body, like the sinuses, mouth, throat, and stomach. It provides a general boost to the immune system from top to bottom in your system and increases the general efficiency of your system by alkalizing it and providing the energy for other metabolic processes. Finally, although the evidence has not been completely verified, early studies have shown that xylitol directly affects the number of white blood cells that are in the body, meaning that this sugar substitute directly boosts the infection-fighting power of our entire body.

Word of Caution: When something seems too good to be true, it usually is, and many people have tried to poke holes in the xylitol trend. While some people have suffered from minor GI disturbances after switching from normal sugar to xylitol, these usually don’t last long and are rarely severe. The best way to avoid this situation is to introduce it to your system slowly, rather than suddenly replacing all of your sugar intakes with xylitol. Also, be sure to keep xylitol away from dogs, as it has been found to drastically drop their blood sugar levels to very dangerous levels.

Besides those few words of caution, enjoy the wide range of benefits xylitol has to offer. You won’t be sorry!

We have heard of stories like Marie Antoniette where stress caused an almost instant graying of hair. But the science behind this phenomenon was still unclear.…