Celery seeds have benefits that most people don’t know about, and it’s a rather simple substance to add to your daily diet. It has various health benefits, which include strong diuretic properties, prevention, and treatment of cardiovascular diseases, possible anti-cancer properties among others.

What are Celery Seeds?

Celery seeds are the seeds of the celery plant, Apium graveolens, and they belong to the same family of plants like parsley, carrots, and coriander. The seeds are small and brown, with a strongly concentrated celery flavor, and originate on the celery flower. As a spice, celery seed is most often found in hearty soup and bread recipes, and it’s a common ingredient in pickling brines and salad dressings. [1]

Celery was one of the first plants cultivated in the Mediterranean region. Consequently, for centuries, celery seed has been a mainstay ingredient of folk medicine in those regions. In Indian Ayurvedic medicine, it is used for digestion, and as a detoxifier. Today, it is available as an extract, a spice, or in tablet form at most health food stores, and is used to treat a variety of ailments.

A one-teaspoon serving of celery seed contains 8 calories and half a gram of fat. According to the USDA National Nutrient Database, it also contains 35mg of calcium, and moderate amounts of iron, zinc, magnesium, manganese, and phosphorus. [3]

Celery seed is one of the world’s oldest folk medicines and is still very popular today for practitioners of natural medicine. It is available as a herbal spice, ground or whole, and as an extract or oil. Some of its benefits are as follows.

Celery seeds have strong diuretic properties, meaning that they stimulate flushing of the body. This flushes out toxins, as well as excess uric acid. Because of this, celery seeds are commonly recommended for people suffering from gout, a condition caused by a buildup of uric acid. Celery seeds are also recommended for anyone suffering from kidney stones or water retention. Wesam Kooti, Student Research Committee, Kurdistan University of Medical Sciences, Sanandaj, Iran in his report published in the Sage Journals stated that the root of the celery is diuretic and it is used for the treatment of colic. Because of the slight antibacterial and anti-fungal properties of celery seed, it is often used to treat people with bladder or kidney infections. [4]

Celery seeds have been shown to reduce blood pressure in people with moderate to high blood pressure. This is partly due to celery seed’s phthalides, which lower the level of stress hormones in your body. In addition, celery seeds are high in potassium, which helps blood vessels dilate. Both of these together encourage the blood to pump freely and relieve tension in the blood vessel walls. This can lower your risk of heart attack and stroke, as well as coronary heart disease. A team of Chinese researchers published in the Nutrient’s Journal that celery has a great potential in preventing and treating cardiovascular diseases. [5] 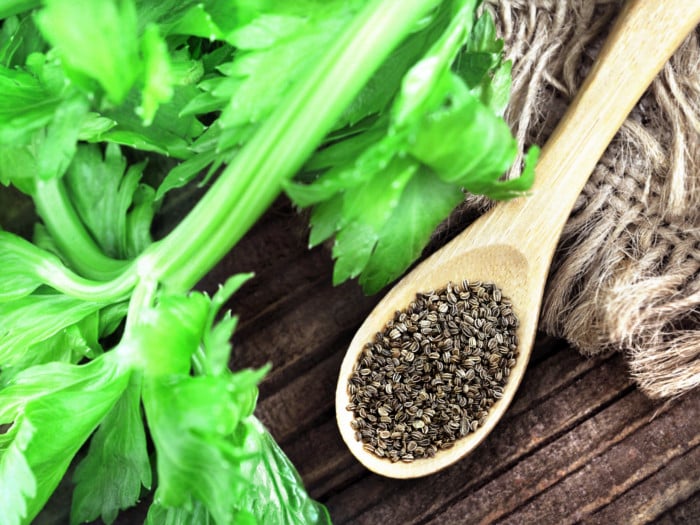 Celery seeds are also a good natural source of magnesium. Low magnesium levels can cause irritability, problems with mood regulation, and bad sleeping cycles. Adding magnesium can increase the deepness and tranquility of your sleep. According to Dr. Leonard F. Bjeldanes, in a study published in the Journal of Food Science, various active ingredients in celery seed have clear sedative effects in lab tests. [6]

According to Dr. Morales Asin, C. Iñiguez et al’s report published in the Journal of Head and Face Pain, celery seeds also contain coumarins, which boost the performance of white blood cells. Those same coumarins may also help alleviate migraine symptoms. One tablespoon of celery seeds also contains 25% of your daily recommended amount of manganese. Manganese is an essential cofactor for many different enzymes involved in your body’s natural production of antioxidants. [8]

A member of the parsley family, celery seeds also contain a chemical called apiol, which stimulates the flow of blood to the uterus and pelvic area. Celery seeds have long been used to help stimulate menstrual bleeding and ease menstrual cramps. [9]

Celery seeds contain anti-inflammatory compounds that can help relieve swelling and pain from arthritic joints, and help alleviate the effects of asthma. According to a report published by researchers from Nutritional Sciences, Department of Food Science, Food Technology and Nutrition, University College, Cork, Ireland, Sedanolide, which is found in the highest concentration in celery seed extract, is used commonly to treat gout, rheumatism and muscle pain. A team of Singaporean researchers published a report in the Clinical and Experimental Pharmacology and Physiology stated that celery seed also contains 3-n-butylphthalide, which is not only recommended for rheumatism but may also help control cholesterol levels, further protecting heart health. [10] [11]

Celery seeds contain compounds that can help regulate lipid metabolism and reduce the risk of fatty liver, thus reducing liver enzyme levels, says Nehal M. Abd El-Mageed, a researcher at the Department of Nutrition and Food Science, Faculty of Home Economics, Helwan University, Egypt. The report was published in the Pharmacognosy Magazine. Many people claim celery seeds alleviate the symptoms of acetaminophen damage in their liver levels, although evidence for this is thin. [12]

According to a report published by a team of researchers from the Department of Parasitology, Faculty of Medicine, Chiang Mai University, Thailand, in the Journal of Vector Ecology, a few drops of celery seed oil mixed into body lotion is a natural mosquito repellant and can help improve skin health at the same time. [13]

Side Effects of Celery Seeds

According to a research report published in the International Journal of Obstetrics and Gynaecology,  celery seed is not recommended for women who are pregnant, trying to get pregnant, or breastfeeding because of its properties as an emmenagogue. It is also not recommended for anyone already on blood pressure or anticoagulant medication. According to Dr. Joshua Harris, Houston Methodist Hospital, Center for Orthopaedics & Sports Medicine, stop taking celery seed at least two weeks before surgery. Anyone with allergies to birch pollen should avoid celery seeds. It is not recommended for children under three years of age. [14] [15] [16]

Rate this article
Average rating 4.8 out of 5.0 based on 3 user(s).
Read This Next:
Popular Articles