Benefits and Side Effects of Erythritol

Using erythritol as a replacement sweetener is becoming increasingly popular, but before adding this to your diet, it’s best to understand the potential benefits and side effects.

Erythritol is a four-carbon sugar alcohol that can be isolated and extracted from certain natural sources such as wine, soy sauce, and other fermented foods, as well as synthetically produced. It is growing in popularity since it is able to reduce the sugar and calorie level of many different foods, without sacrificing the sweetness. The most common sources of this sweetener are fermented foods and fruits, but the majority of what is now being added into foods is derived from GMO cornstarch. More specifically, the glucose is removed from that cornstarch and then allowed to ferment with a specific type of yeast. [1]

While erythritol is generally considered safe, there are some concerns, depending on your pre-existing conditions and current medications. Many people believe that stevia and erythritol are the same things, but in fact, stevia is an herb and has the same sweetness as sugar, while the sweetener in question tends to have between 60 and 80% the sweetness of sugar. This sweetener does factor heavily in ketogenic diets since it is calorie-free and has a minimal amount of carbs – only 5 per 100 grams! 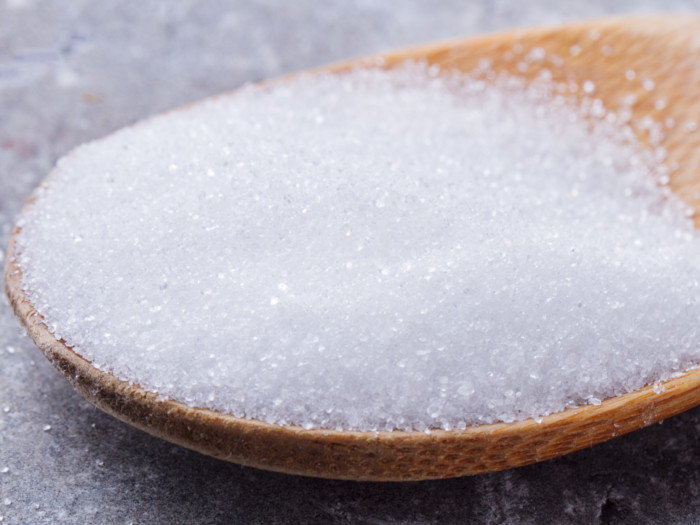 Erythritol is a sugar alcohol used as a low-calorie sweetener. Photo Credit: Shutterstock

The major health benefits of erythritol include its effects on diabetes, tooth decay, weight loss, and chronic diseases, among others.

Erythritol helps in reducing lipid peroxidation and glucose metabolism, thereby improving oxidative damage involved in the development of diabetes, as per a study published in the Journal of Agricultural and Food Chemistry. [2]

Unlike traditional sugars and other alternative sweeteners, erythritol has no negative effects on your teeth, since the bacteria in the mouth cannot metabolize this compound, thus lowering your risk of cavities. [3]

Erythritol being a zero-calorie option as a sweetener can help improve metabolic processes and aid in weight loss efforts. [4]

Some studies have found that this sweetener has antioxidant properties, including the ability to reduce oxidative stress on the skin and organ systems. It can help improve the appearance of wrinkles, reduce chronic inflammation throughout the body, and even protect vision health, among many others. [5]

If you don’t have any of this sweetener on hand, but want to lower your sugar intake and glycemic load, try stevia, monk fruit or raw honey, among others.

There are some side effects to using erythritol, which has made this sweetener somewhat controversial.

Rate this article
Average rating 3.0 out of 5.0 based on 12 user(s).
Read This Next:
Popular Articles