If your recipe calls for ginger, you can use a number of reliable ginger substitutes that can mimic the flavor, and even some of the health benefits, of this globally popular spice. However, before you begin experimenting with your delicate recipes, it’s best to understand what your options are, so you can make the best ginger substitute choice.

If your recipe calls for ground ginger, some of your best options for a ginger substitute are cardamom, cinnamon, allspice, nutmeg or mace. While each of these substitutes has distinct flavors, they can mimic the effect of ground ginger if you’re really in a pinch. Once you combine this into the rest of the meal, the ginger will be replaced by a sweet and spicy bite of the food.

Another popular option used by many chefs is pumpkin spice, a pre-made mixture of spices that includes ginger, allspice, nutmeg, and cinnamon. Ground ginger doesn’t have quite as many nutrients as fresh ginger, and the flavor after being heated is more similar to these common spices, at least one of which is found in almost every spice rack. 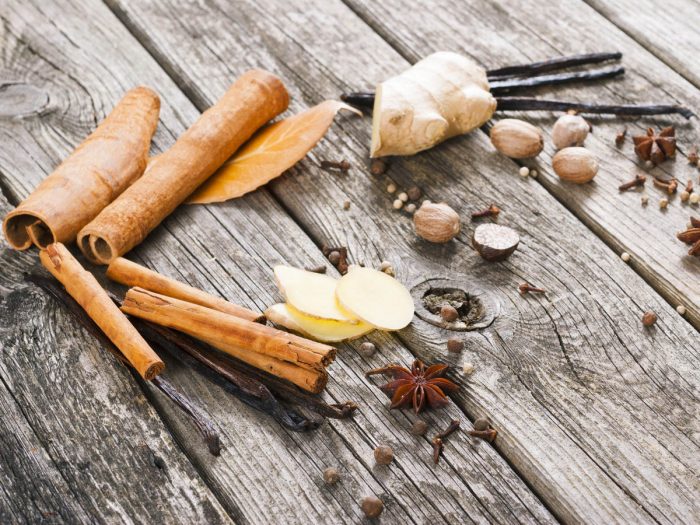 A mix of spices can be a great substitute for ginger. Photo Credit: Shutterstock

If you are halfway preparing a curry when you realize that fresh ginger isn’t available in your kitchen, you will need to find a good ginger substitute. The best option is to simply use ground ginger, as this will retain most of the same nutritional benefits, and you can use an equal replacement amount. In other words, if the recipe calls for 1/4 cup of fresh ginger, you will want to use 1/4 cup of ground ginger as a replacement. While this may seem like a lot, the flavor of the ground ginger will not actually be as strong as the fresh ginger.

If you don’t have ground ginger to replace fresh ginger, or if someone you are cooking for happens to be allergic to ginger for some reason, you can replace the bite of ginger with lemon juice and a healthy dose of garlic. Black pepper and lemon can also partially mimic the flavor profile of fresh ginger, if necessary.

Crystallized ginger has a very peculiar flavor and a unique quality that makes it so desirable. However, this doesn’t mean that you can’t have a viable crystallized ginger substitute. Crystallized ginger is usually a dried and candied variety of this powerful spice, but it does lose some of its kick when it is crystallized. Therefore, you can use a slightly smaller amount of fresh ginger to create the same effect in a dish.

If you are also strapped for fresh ginger, ground ginger in slightly larger quantities can replace the sweetness and flavor of crystallized ginger.

As a last resort, some people have used nuts as a replacement for the textural elements of crystallized ginger. Walnuts and pecans have some natural sweetness, making them an obvious choice; you can grind the nuts down into small chunks, nearing a powder, and then mix them with lemon juice and sugar. While this may seem like a diverse combination of flavors and substances, it works surprisingly well to replace the effect of crystallized ginger in a dish.