Is Butter Healthy For You

Butter is a dairy product that forms when milk or cream is churned, either from a fermented or a fresh source. It is traditionally derived from animal milk, most commonly cows. However, other kinds of butter can also be derived from milk animals like sheep, buffalo, goats, and yaks. In this article, we are focusing on butter made from cow’s milk.

There is evidence that this delicious spread has been used in various cultural cuisines for more than 4,000 years, and in-depth studies of Indian culture, as well as the Bible, tell us that it has been around for millennia, has long been considered sacred, and has long been respected for its nutritious potential. However, in recent decades, a shift in opinion has given butter something of a bad name, and people are turning towards margarine, or other overly processed and chemically altered substitutes, rather than butter. Not only is this decreasing the amount of organic food that is in the diet, but also eliminating the possible health benefits that butter can bring to your life.

Is Butter Healthy For You?

Butter can have health benefits when had in moderation. Let us look at the most important points centered around butter consumption and its health benefits.

According to research papers, dairy products like butter, ghee (clarified butter), and cream are fat-rich dairy products that are rich in nutrients along with health-benefiting compounds like milk fat globule membrane (MFGM), conjugated linoleic acid (CLA), and short-chain free fatty acids (SCFAs). These compounds have various beneficial actions on human health, such as antidiabetic, anticholesterolemic, and antimicrobial activities.

For instance, a large percentage of SCFAs is butyric acid. In preliminary studies, butyrate, a form of butyric acid is shown to help reduce inflammation, improve gut health, and may be used as a potential treatment for Crohn’s disease. 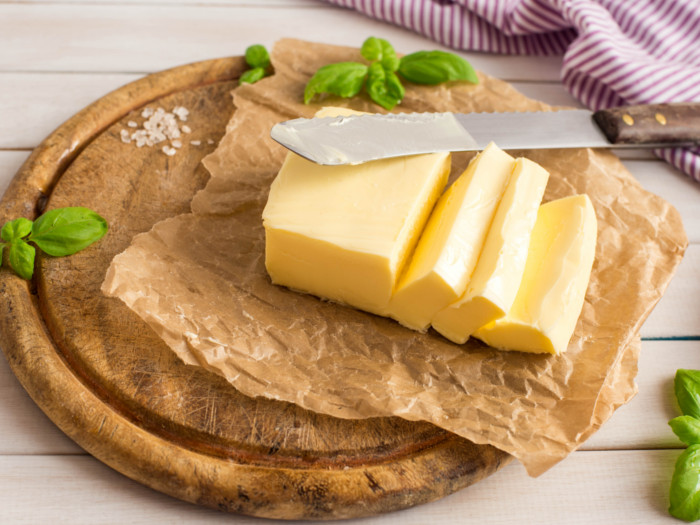 A little butter goes a long way in terms of taste and satiety. Photo Credit: Shutterstock

Butter is a rich source of conjugated linoleic acids (CLA), a naturally occurring fatty acid that is beneficial to health. CLAs are produced during the digestion of unsaturated fats in cows and sheep, which is why these fatty acids are mainly found in meat and dairy products.

Over the last few years, researchers have found that CLAs may help change body composition. In Elsevier’s Journal of the American Dietetic Association, a report suggested that CLAs may specifically help reduce body fat and increase lean body mass. Moreover, researchers found that CLAs have anticarcinogenic, antiatherogenic, antidiabetogenic, and immune-modulating properties. Due to this, CLAs have garnered much public attention and are being sold as a dietary supplement. However, the studies have been limited to animal models and a large-scale human clinical trial is required to fully understand the effect of CLAs on the body.

Also, one of the most important findings in recent research, published in the American Journal of Clinical Nutrition, is that there was no real association between the naturally occurring trans fat in dairy products and the risk of myocardial infarction. The same study found that the content and composition of CLAs found in grass-fed butter can also offset the adverse effects of saturated fat.

The main reason for the no-butter campaign in the late 1970s was because research reports directly linked dietary fat to obesity and other health problems related to metabolism and weight gain. However, the era of low-fat foods caused its own set of health problems and did not really solve the problem of obesity trends. In the 2016 report titled “Is Butter Back?”, a meta-analysis

of butter consumption and risk of cardiovascular disease, diabetes, and total mortality showed that there is little to no association between the two.

However, it has been proven that excessive amounts of saturated fat can lead to weight gain and it is best to limit the amount, instead of removing fat as a food group in general. So, in terms of consumption of butter, it is best to take into account that this dairy spread is high in calories as well as saturated fat and accordingly, incorporate it in your daily diet.

Butter has been used for centuries for baking and cooking. With the backlash against butter in the last two decades, there has been a flurry of substitute products including margarine that has hit the supermarket aisles. Many margarine may be low in saturated fat but contain dangerously high levels of trans fats. According to Harvard Health, new margarine brands are out in the market, which does not have trans fats and is low in saturated fats. It is therefore advisable to buy margarine after a thorough evaluation of the nutrition labels.

However, margarine may still be a debatable healthy butter substitute as it may contain sweeteners, fatty emulsifiers, preservatives, and coloring agents. On the other hand, butter is pure dairy fat.

May Help In Satiety

Anecdotal evidence shows that using a little bit of high-fat butter instead of low-calorie spreads may help keep the person satiated. However, many reports show that there is no real difference in satiety when you compare fats high in monosaturated fatty acids (peanut or canola oil) to those rich in saturated fatty acids (butter).

How Much Butter Can You Eat In A Day?

According to the 2015-2020 US Dietary Guidelines, people should gradually move towards shifting to reduce saturated fats intake to less than 10 percent of calories per day. So if you are following a 2000-calorie diet, saturated fats should be about 200 calories which equals about 2 tablespoons of butter.

It would be better, as Harvard Health suggests, to have butter as needed sparingly and to limit the amount of saturated fat altogether. A healthy alternative to butter would be olive oil. A realistic option is to eat different kinds of fats such as olive oil, avocado, nuts, seeds, and fatty fish.

Rate this article
Average rating 4.0 out of 5.0 based on 311 user(s).
Read This Next:
Popular Articles