Although bees are perhaps most famous for their honey, they also have another valuable tool in their arsenal, propolis. Commonly known as bee glue, propolis is a type of resinous material that bees can collect on their legs from flowers, buds, and other sources of sap. It is then brought back to the hive, to be used mostly as a glue to fix any damage within the hive. While beeswax is generally used for large-scale construction, propolis is used continuously to repair their home. For thousands of years, it has been acquired and extracted from hives and used in traditional medicines. Not only does this bee glue repair the hive, but it also protects against diseases and provides a healthy environment for them to survive. [1] 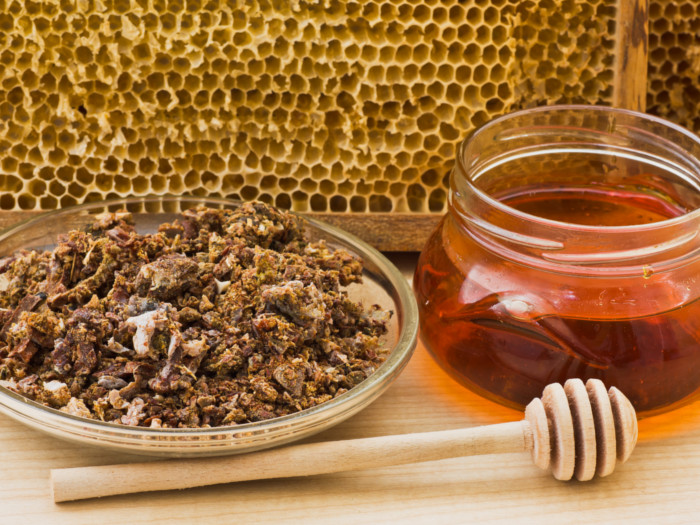 Many of the applications of propolis for humans rely on those same characteristics. Research is ongoing concerning its usefulness in many health issues, but thousands of years of traditional use says a lot. Since bees are found throughout the world, many different applications and uses for propolis have been discovered and popularized. With the rise of global information sharing, it has once again grown in popularity. These health benefits are largely attributable to the terpenes, essential oils, antioxidants, organic compounds, and natural acids found in the propolis. The nutrient makeup varies based on the region as well as the variety in flora, so propolis can be somewhat different around the world. [2]

Let us look at the most important health benefits of propolis.

One of the most valuable aspects of propolis, for both humans and bees, is its natural antiseptic qualities. By spreading propolis or its extract on wounds, you can protect open sores and cuts from infection, which are often far more serious than the wounds themselves. Secondly, its antioxidants can act to speed wound healing, stimulating blood flow and growth in those areas, along with reducing inflammation. [3]

In a similar vein, it can also be used as an anti-inflammatory cream for bug bites and other skin afflictions not technically classified as wounds. For thousands of years, insect bites, rashes, and skin irritations of every kind have been treated with salves made with propolis or applying the substance directly to the skin. This makes it effective today as a treatment for acne, psoriasis, eczema, and other skin infections. [4]

Some of the other active ingredients found in propolis stimulate the circulatory system in the body, which can help improve blood flow and oxygenation of various parts of the body. This means a boost in energy, more rapid wound healing, and a healthier metabolism. Blood flow through the arteries and blood vessels is also important to promote heart health and will lessen the chances of blood clots, atherosclerosis, and subsequent heart attacks or strokes. [5]

While we mentioned the antiseptic abilities of propolis above, the impact it can have on our immune system is much greater. By adding small amounts of it to your diet, you can increase the strength of your immune system due to its natural antiviral and antibacterial effects. [6]

Antioxidants can neutralize and eliminate free radicals from many different systems of our body, which is why a high-antioxidant substance like propolis can be so valuable. Antioxidants work with the immune system to slow down the advance of free radicals. [7]

Studies have found propolis to exhibit antiproliferative as well as radioprotective properties. Some animal studies have also pointed towards its potential antitumor activities. According to a 2014 paper published in the Asian Pacific Journal of Tropical Biomedicine, propolis is capable of inducing apoptosis, especially in cancer cells. However, the results are said to be dependent on the concentration of the product used. [8] [9]

Another 2016 research explores the radioprotective potential of this bee product, especially in cancer cells. It suggests that the use of propolis with radiotherapy can not only protect against radiation damage but also enhances the radiosensitivity of breast cancer cells. Further research is needed in humans to fully understand its therapeutic power. [10]

In recent research studies, propolis has been found to reduce the severity of allergic reactions. By inhibiting the production of histamines, which occur when an allergen is encountered, it can help lessen the impact of allergens and thus improve the normality and quality of life for those who use it. [11]

One of the other effects of antioxidants is an improvement in cognitive abilities. Free radicals are partially responsible for the “cobwebs” of old age, and by stimulating the use and creation of new neural pathways, propolis can keep cognitive disorders at bay and improve memory, retention, and interaction skills as we age. [12]

Due to the antifungal and antibacterial properties of propolis, bee glue is also widely used in oral hygiene products. It has been found to reduce plaque, canker sores, herpes, and various other oral diseases that affect the lips, gums, and throat. Mouthwashes and toothpaste that use propolis or its concentrated forms have been very effective in improving oral health. [13]

If you have ever worried about the quality of your vision as you age, then “look” no further than propolis, which has been connected to a reduction in cataracts formation. This is believed to be due to the antioxidants, amino acids, and bioflavonoids that are found in it. [14]

Propolis has been known for thousands of years as a way to improve the health and beauty of skin and hair. You can topically apply it to your skin and scalp. You will also get health benefits by consuming it. [15]

A Final Word of Warning: Although the benefits of propolis are impressive, side effects have been reported in the past, including those who suffer from asthma and anyone with bleeding problems. It can slow blood clotting and negatively impact respiration. If you are allergic to honey, bee products, or certain types of trees or saps, do not use propolis. Also, before adding this to your health regimen, speak to a medical professional, and always get nutritional supplements and herbal remedies from trusted sources.

Rate this article
Average rating 3.8 out of 5.0 based on 43 user(s).
Read This Next:
Popular Articles