Matcha or maccha is a finely ground, bright emerald-green tea powder with the scientific name Camellia sinensis. It is prepared from a high-quality shade-grown leaf known as tencha. The tea bushes are sheltered to avoid the exposure of direct sunlight which reduces the pace of photosynthesis and slows down the growth of plants. This provides the leaves with a darker shade of green and stimulates the production of chlorophyll and amino acids. [1]

How Is Matcha Harvested?

It is a natural, organic green tea which has been the heart of the famous Japanese tea ceremony for over 900 years. The Buddhist monks honored matcha tea as the health elixir for its potential to heighten the concentration and enhance metabolism.

Thought to originate in China in the 9th century, this was used for curing various ailments. It was only after the Zen Buddhist monks from Japan realized its true potential at the end of the twelfth century, the perfection in the cultivation of these leaves picked up. Matcha is still scarcely grown, accounting for just 0.6% of total tea yield.

According to a popular adage, there is special etiquette which is followed in Japan while drinking this tea: if you drink matcha with your back straight, the pleasure of the experience would double. So, sit straight and sip it right!

Matcha is a time-honored beverage and a source of essential nutrients. [3]

The important health benefits of matcha tea have been listed below. 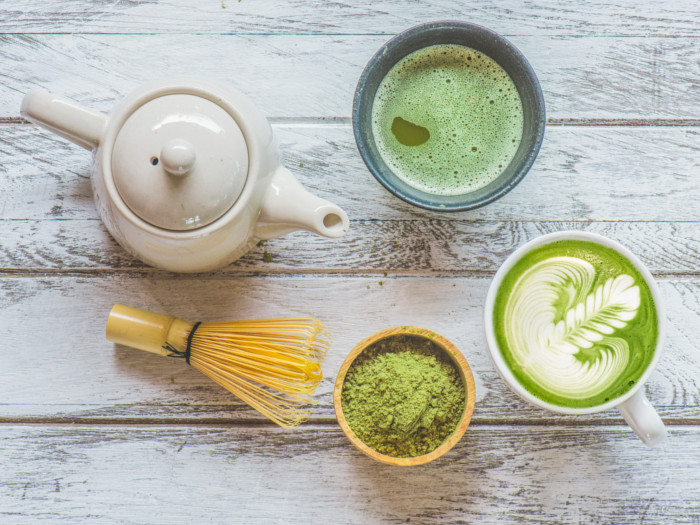 According to Dr. Art T Dash’s book, “Secrets to Lowering Cholesterol with Nutrition and Natural Supplements, matcha tea works wonderfully in providing a calming effect on the body. L-theanine, a unique amino acid present in this green tea, possesses anti-anxiolytic properties, which assists in boosting alpha waves in the brain. These alpha waves enhance mood, encourage relaxation, induce a profound feeling of mental clarity, and help achieve an alert state of mind. [5]

Matcha tea has antioxidants such as catechins – EGCG (epigallocatechin gallate). A study published in the Journal of Chromatography A assessed the antioxidant power of this tea. Furthermore, it revealed that as compared to other green teas matcha has the highest amount of EGCG. These antioxidants seek out for the oxygen free radicals and neutralize their harmful effects. Thus, this helps in protecting the body from the occurrence of disorders or inflammations associated with oxidative stress. [6] [7]

According to some research, matcha tea may have some anti-cancer potential. It has a therapeutic effect on the body by “mediating the metabolic reprogramming of cancer cells,” according to a study in the journal Aging.
[8]

A number of studies have shown that polyphenols present in this tea prevent the proliferation of malignant cancerous cells, and promotes induction of apoptosis.

Matcha tea powder contains a unique form of caffeine known as theophylline, which sustains the energy levels without any adverse effects (unlike energy drinks or sodas, which can make you crash). The slow release of energy due to theophylline helps in supporting the functionality of adrenal glands. It also maintains optimum hormonal levels. [9]

Consumption of matcha leads to the absorption of catechin in the tissues of the eye, which can help prevent blindness caused by cataracts. It also boosts vision and may help prevent eye disorders, such as glaucoma. [10]

A study published in Trends in Food Science & Technology suggests that theanine found in matcha tea acts as a neurotransmitter. It exerts a calming effect on the brain without causing any drowsiness. This soothing effect helped the Buddhist monks in maintaining deep concentration during their meditation sessions and was the main reason behind its popularity. [12]

Another study published in Biological Psychology reveals the possible anti-stress effects of theanine present in this tea, which assists in reducing the physiological and psychological stress responses by inhibiting the neuron excitation. This tea is also believed to boost memory and concentration. [13]

Matcha tea rich in EGCG helps fight various bacterial, viral, and fungal infections. According to a 2013 research study published in the British Journal of Pharmacology EGCG binds to the lipid membrane and exerts inhibitory action against the growth of various human pathogens. These include influenza A virus, hepatitis B, and C virus, herpes virus, adenovirus Staphylococcus aureus bacteria, and Candida albicans yeast. While the exact mechanism of this action is unknown, it does show that matcha may be a great addition to protect against various infections. [14]

One research study published in the Journal of Medicinal Food conducted a test on diabetic subjects, where they were administered with matcha tea extracts. The study showed how matcha tea helps to prevent renal and hepatic damage. It is thought to be effective at restraining the accumulation of advanced glycation end products in the kidneys. Green tea extracts also helped to treat non-alcoholic fatty liver disease and may be considered as an ancillary treatment for this disease state. [15] [16]

Matcha tea is beneficial for those suffering from type-2 diabetes. In the same study as mentioned related to renal disease, above, it helps in maintaining a healthy metabolism by lowering blood sugar levels. This antioxidant-rich tea also reduced the levels of triglycerides, cholesterol, and hepatic glucose content in this research. While more studies are needed to bolster these anti-diabetes outcomes, preliminary findings are positive in its favor. [17]

Matcha contains various antioxidants, polyphenols, epigallocatechin gallate, and L-theanine. All of these collectively contribute towards boosting the immune system and protecting against various antigens. [18]

EGCG present in this tea may help to lower cholesterol levels thereby maintaining a healthy cardiovascular system. A study conducted by researchers at the University of Alabama at Birmingham, USA, has suggested that EGCG also helps in reducing the accumulation of lipids and promotes autophagy in the vascular endothelial cells. [19]

Matcha is a healthy green tea with multi-dimensional benefits, but consuming it in excess may lead to the following:

Apart from healthy gains, matcha is widely popular as an ingredient in a range of food items. It is used to add flavor to a variety of confectionery items and drinks like:

Rate this article
Average rating 4.0 out of 5.0 based on 405 user(s).
Read This Next:
Popular Articles