A report published in the Flavour and Fragrance Journal stated that ravensara essential oil is a powerful oil from the mysterious island of Madagascar, that beautiful spot on the Eastern coast of Africa. Ravensara is a large rainforest tree native to Madagascar and its botanical name is Ravensara aromatica. Its essential oil is praised in Madagascar as a “Cure All” oil, in much the same way as tea tree oil is heralded in Australia. [1]

Ravensara holds a place in the traditional medicine system of Madagascar and has been in use for centuries as a tonic and fighting infections. Modern studies on this oil have revealed many other associated medicinal benefits. Let us see what they have discovered so far. 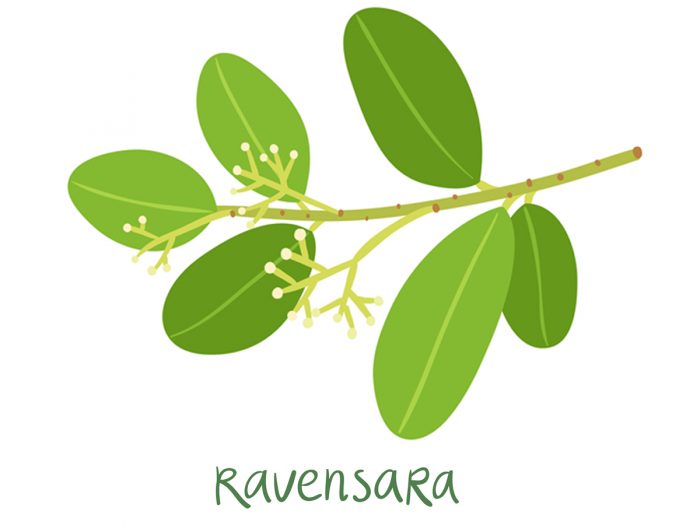 The common health benefits of Ravensara essential oil are mentioned below.

The analgesic property of Ravensara oil may make it an effective remedy for many types of pain, including toothaches, headaches, muscular and joint pain, and earaches.

According to a report published in the Evidence-based Complementary and Alternative Medicine Journal by a team of researchers from Korea, ravensera oil itself is non-sensitizing, non-irritating and it reduces the allergic reactions of the body as well. Gradually, it may build resistance against allergenic substances so the body does not show hyper reactions against them. [2]

The most notorious bacteria and microbes cannot even stand to be near this essential oil. They fear it more than anything and there are sufficient reasons for that. This oil is fatal to bacteria and microbes and can wipe out entire colonies very efficiently. It may inhibit their growth, cures old infections, and stops new infections from forming. Therefore, it can be used against diseases resulting from bacterial and viral infections such as food poisoning, cholera, and typhoid.

This oil is very good for countering depression and giving a boost to positive thoughts and feelings of hope. It may uplift your mood, relax the mind, and invoke energy and sensations of hope and joy. If this essential oil is systematically administered to patients suffering from chronic depression, it can help them gradually come out of that difficult situation.

Similar to its effect on bacteria and microbes, this oil is very harsh on fungi as well. It may inhibit their growth and even kills their spores. Therefore, it can be used against fungal infections in the ears, nose, head, skin, and nails.

People that are suffering from severe coughs, breathlessness, cramps, diarrhea, pulling pain in the abdomen, nervous afflictions, or convulsions due to spasms can find good relief using this oil. It fights spasms and induces relaxation in muscles and nerves.

Sepsis is caused by a type of bacteria called Staphylococcus aureus, which mainly infects open and unprotected wounds as well as soft and delicate internal organs. Sepsis is a big threat to the lives of newborn babies, as their skin is too delicate to withstand infections. Thousands of babies die every year due to this infection. This bacteria spread very rapidly and covers the whole body, causing acute pain in the muscles, cramps, abnormal muscular afflictions and contractions, convulsions, fever, and swelling.

The essential oil of Ravensara has certain components like limonene and methyl eugenol (and others) which may not let this happen by killing this bacteria and inhibiting its growth. It can be ingested to let its effect spread evenly throughout the body.

This efficient bacteria fighter is a virus fighter too. It may stop viral growth by rupturing the cyst (the protective coating on the virus) and then killing the virus inside. It is very good for fighting diseases caused by viruses such as the common cold, influenza, measles, mumps, and pox.

The essential oil of Ravensara is known to be very good for curing frigidity or sexual dysfunction. It enhances the libido and also helps treat erectile dysfunctions.

May Act as a Disinfectant

What causes infections? Quite simply, bacteria, fungi, viruses, and protozoa. As you have probably guessed, Ravensara essential oil can stop the growth of these bacteria, fungi, viruses, and protozoa, and can eliminate them as an ideal disinfectant. It is equally effective both internally and externally. It also disinfects the space within its aromatic reach if used in fumigants, vaporizers, and sprays. The added benefits are a sweet fragrance and no adverse side effects like many other synthetic disinfectants on the market.

The diuretic property of the essential oil of Ravensara may facilitate the removal of waste substances and toxins from the body by increasing urination, both in frequency and in quantity. It may also help remove excess water, salt, and fat from the body, thus keeping it safe from diseases associated with an accumulation of toxins, including rheumatism, gout, arthritis, acne, and boils. It can also reduce dangerous accumulations of water, known as edema, and salt, which can lead to hypertension and water retention in the body. Furthermore, it makes you feel lighter and facilitates digestion as well.

May Act as an Expectorant

Being an expectorant means being an agent that can dilute or loosen the phlegm or catarrh deposits in the respiratory system and ease their passage out of the body. An expectorant like Ravensara essential oil is necessary in cases of coughs, congestion, asthma and breathing troubles, and heaviness in the chest arising from the hardening of phlegm in the bronchi, trachea, larynx, pharynx, and lungs.

The essential oil of Ravensara has been celebrated for centuries due to its relaxing and soothing properties. It is very good at inducing relaxation in cases of tension, stress, anxiety, and other nervous and neurological problems. It also calms and soothes nervous afflictions and disorders. According to a report published in the Asian Pacific Journal of Tropical Biomedicine Journal, the relaxing effect of the oil helps bring healthy and restful sleep to patients suffering from insomnia. [3]

May Act as a Tonic

The essential oil of Ravensara has a toning and fortifying effect on the body. It may facilitate the absorption of nutrients into the body and helps every organ system function properly and more efficiently. In this way, it promotes growth and provides energy and strength. This oil is particularly good for growing children as a growth tonic.

Ravensara oil has numerous other benefits. It can be used to treat improper blood and lymph circulation, fatigue, pain in muscles and joints, edema, indigestion, shingles, and herpes, says a report published in the International Journal of Biomedical Research. It also has a vulnerary property and helps heal wounds faster by protecting them from infections and crowding of leucocytes and platelets in the affected area. This oil can be used topically after blending it with a carrier oil, or a few drops can be added to the bath. [4]

Word of Caution: This oil is completely safe, with no toxicity, phototoxicity, associated irritation or sensitization. Still, it is not recommended during pregnancy, since it has aphrodisiac properties. This means that it works on certain hormones whose secretion can have certain adverse effects during pregnancy.

Rate this article
Average rating 4.1 out of 5.0 based on 246 user(s).
Read This Next:
Popular Articles