What is Prickly Pear?

Prickly pear or cactus fruit is the common name of the fruit that grows on top of the leaves of Nopales cacti. Spread throughout North and South America, about 200 different species of Nopales (Opuntia) cacti are found, all of which have some form of this prickly pear fruit, although not all varieties are edible. The most commonly used species in terms of eating and cooking are O. ficus-indica, also known as the Indian Fig Opuntia.

The most interesting thing about this fruit is that it grows at the very edge of the spiny leaves of these imposing cacti, which are some of the hardiest lowland cacti in the world, a trait inherited by its fruit. The fruits are oval in shape and their color can range from yellow and light green to orange, pink, and red, depending on their variety and ripeness. Although all cacti are technically native to the Americas, prickly pears and its fruits have spread across the world to Egypt, Morocco, Europe, and the Middle East. 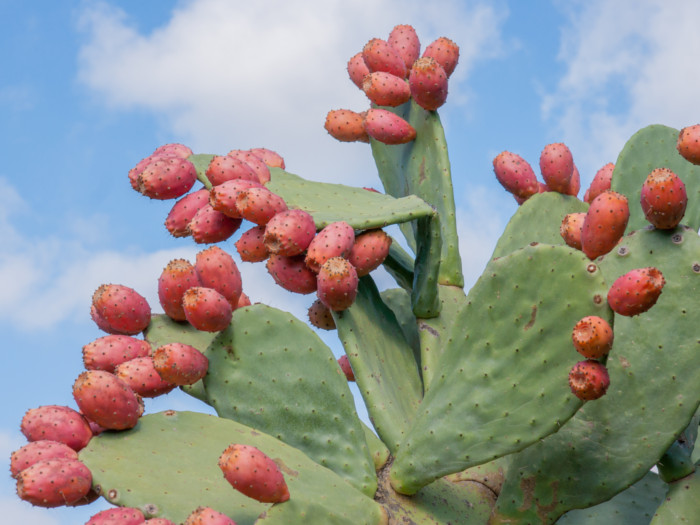 Apart from the unusual name, appearance, and origin of this fruit, it also has a unique composition of nutrients, including high levels of vitamin C, B-family vitamins, magnesium, potassium, calcium, copper, and dietary fiber (source: USDA National Nutrient Database). In terms of organic compounds, cactus fruit has high levels of flavonoids, polyphenols, and betalains, all of which have a positive impact on health.

The health benefits of this pear are explained in detail below:

Research by Luisa Tesoriere et al. published in The American Journal of Clinical Nutrition emphasizes that eating cactus pear fruit is positively linked to toxin removal and antioxidant activity due to its high levels of vitamins C and E. In fact, a single serving of prickly pears contains more than 1/3 of your entire daily requirement of vitamin C. Also known as ascorbic acid, vitamin C plays a major role in boosting the immune system, stimulating the production of white blood cells, and acting as an antioxidant in the body. Furthermore, vitamin C is an important component of various enzymatic and metabolic processes, including the creation of bone and muscle tissue.

Calcium plays an integral part in the creation of bone tissue and prickly pears contain a significant level of it in every serving. By ensuring you have enough calcium in your system, you can prevent various dental issues, as well as age-related bone disorders like osteoporosis.

Cactus fruit have a significant level of dietary fiber like most fruits and vegetables, so these spiny fruits can help you regulate your digestive process. Fiber bulks up the stool to help food pass through the digestive tract easily, thereby eliminating constipation, bloating, and serious gastrointestinal issues such as gastric ulcers.

There are a number of components of prickly pears that make it very good for heart health. First of all, the levels of fiber in the fruit can help lower the levels of LDL (bad) cholesterol in the body. Secondly, the significant levels of potassium can help lower blood pressure, by relaxing the blood vessels and reducing stress on the cardiovascular system. Finally, the betalains found in prickly pear, have been directly connected to strengthening the endothelial walls of blood vessels, thereby reducing the chances of weakening the circulatory system. Overall the cactus fruit can prevent atherosclerosis, coronary heart diseases, and stroke.

According to The American Journal of Clinical Nutrition (2004), prickly pears have high levels of flavonoids, polyphenols, and betalains. These act as antioxidant compounds and neutralize free radicals before they cause healthy cells to mutate. Additionally, research tests conducted on laboratory mice led by a team from the University of Arizona found that Arizona prickly pear cactus helped suppress tumor growth; however, the researchers stated further studies are required as the mechanism of anti-cancer effect was not completely understood.

The antioxidants in prickly pears protect the skin, lower the chances of premature aging, improve vision, prevent macular degeneration, and increase the strength and functionality of your brain. Studies conducted in Germany showed high levels of tocopherol and beta-carotene in the prickly fruit, both of which are very beneficial for skin and eye health. Free radicals are partially responsible for the oxidation of neural cells that lead to various diseases. Polyphenolic compounds have been linked to increased cognitive activity.

With high fiber and nutrient density, low calories, and saturated fat, prickly pears can keep your body in a healthy form without adding any extra weight. Also, the fiber and carbohydrates prevent you from overeating!

In traditional medicine, the cactus fruit was mashed and applied topically to parts of the body that were inflamed. When consumed, the antioxidants and minerals in prickly pears can lower inflammation, particularly in conditions like arthritis, gout, or muscle strain. A Seoul National University study confirmed its anti-inflammatory properties. It can also be topically applied to eliminate the swelling of bug bites, which in fact is a method in use for hundreds of years.

The prickly pears are used as food, as well as alternative medicine treatments, as they have a wealth of nutrients and health benefits. Here are some of their uses:

Word of Caution: Before eating a prickly pear, it is very important to remove the skin and peel it off so all of the spines are removed. If they aren’t, the glochids can lodge themselves in your lips, gums, and throat, which can be very painful.