Vodka is one of the most popular spirits in the world. The name ‘vodka’ evolved from ‘Voda’, a Slavic word which means ‘water’. It is generally produced by the distillation of any plant matter rich in starch or sugar including various grains such as corn, rye, wheat, and other materials like potatoes, grapes, and soybeans. It’s also used in the preparation of many classic cocktail recipes such as vodka gimlet, vodka tonic, martinis, screwdriver, cosmopolitan, bloody mary, and so on. Let’s find out more.

Vodka is a popular alcoholic beverage composed of ethanol and water. According to the book ‘History of Vodka‘ by William Pokhlebkin, it is a drink that often scores quite well in the bar menu presented in restaurants and parties. The best and most popular vodkas in the world are Grey Goose, Svedka, Stolichnaya, Zubrowka, Ciroc, Finlandia, Skyy Vodka, Effen, Belvedere, and Ketel One. Some people may also prefer potato or grain vodka over fruit-based vodkas. [1]

Historical origination of vodka remains a topic of discussion and debates attributing to the lack of enough evidence available regarding its instigation. Some sources advocate the initial production of vodka to have occurred in Russia around the 9th century while others say that it may have happened in Poland around the 8th century. For several centuries, this drink was present quite differently from what it is today. During earlier times, the spirit was originally used as a medication and was quite different concerning its aroma, appearance, and flavor present today. In recent decades, scientific research has supported the affirmative effects of consuming a moderate amount of it on human metabolism. 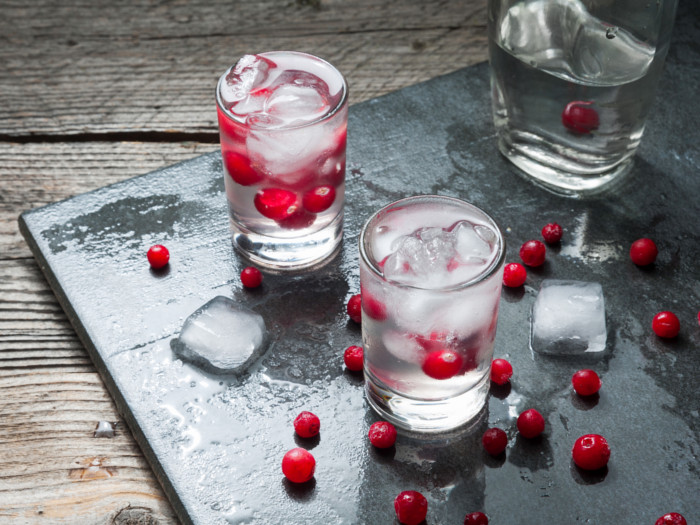 It is a carbohydrate and sugar-free drink that may provide very few calories when consumed neat or without any fat-based mixers. It does not contain cholesterol or fats.

Carbs and Calories in Vodka

Vodka by itself is a clear drink with fewer additives as compared to other darker alcoholic beverages. According to the USDA, a serving of one ounce plain 80-proof vodka can contain approximately 64 calories. Plain or standard vodka contains only water and alcohol (ethanol) aside from some trace nutrients. So you know that all the calories that come in vodka, come from alcohol. As the alcohol percent rises, the calories do too.

In terms of carbohydrates, vodka may contain zero carbs. Although it is made from potatoes or wheat, both of which contain carbs, the processing of this alcoholic beverage may strip away all the carbs.

Normally, people mix vodka with high sugary juices which may raise the calorie count of the drink and nullify the low-calorie attribute. Some of the most famous cocktails in the world mix vodka with orange juice (screwdriver), tomato juice (Bloody Mary), or vermouth (martinis). You can mix it with any other liquid, from sweet fruit juices and sodas to creamy liqueurs, milk, tonic water, and regular water. A screwdriver, made of an 8-ounce pour of orange juice, has nearly 164 calories and contains up to 124 milligrams of vitamin C.

Alcohol by volume (ABV) is the standard measure of alcohol content in any beverage, expressed as a percentage. Traditional preparation of vodka, like most hard liquors, usually aims at maintaining an alcoholic value of 40% by volume, as compared to wine that ranges from 5%-15%, and beer that lies between 4% and 7%. At present, the alcoholic content in vodkas produced in different countries varies depending upon the standards set by them. European vodkas maintain a minimum alcoholic content of 37.5%; while all the vodkas sold in the United States maintain a standard of minimum 30% alcohol by volume.

Vodka from countries such as Russia, Ukraine, and Poland still has 40% alcohol content by volume. Other than alcoholic content, it can also be segregated into two main groups- flavored and clear. Flavorings that are added to it include ginger, cinnamon, lemon, red pepper, vanilla, some special herbs, fruits, and spices and the preference widely varies in different parts of the world.

Vodka may have been quite famously used in Russian folklore for curing practically all ailments ranging from just a mild headache to a condition of a common cold to a bad hangover. Moderate consumption of alcohol forms the basis for all the scientific studies that advocate the effectiveness of vodka in various health conditions. However, medical consent is always advisable before considering vodka for therapeutic relief. Let us look at the potential benefits of moderate vodka consumption as well as its uses in home remedies.

Apart from these, traditionally vodka like any other alcohol may have been used to relieve toothache and bad breath, courtesy its antimicrobial properties. Due to its astringent properties thanks to the alcohol content, it may also have been traditionally used to cleanse the pores of the skin. Moderate amounts can prove to be a sensible choice while following a low-carb diet or weight-loss regime. The idea is to drink it neat, on the rocks or mix it with something that doesn’t have a lot of calories.

Other Uses of Vodka

Culinary Uses: Vodka can come to the rescue when your pie crust turns cakey. The spirit in it averts the dough from making excess gluten. It can help in making the dough moist and makes it perfect for a flaky crust recipe. After all this good work, the vodka silently evaporates during the baking process without leaving any hint of its presence. You can also use it to make vodka-baked salmon, scallops, steaks, or sauces, among other things.

Cleaning Agent: Vodka works as an excellent cleanser. The alcohol in it can help in cleaning the caulking around the showers and bathtubs by killing the mildew and mold. It may clean the eyeglasses and also extends the life of razor blades which are soaked in vodka post-shaving. It kills the germs and averts rusting.

The adverse risks associated with the intake of vodka is the same as drinking excessive alcohol. These may be short term such as violence and injuries to long-term health risks such as chronic diseases. According to the Centers for Disease Control and Prevention, people who should not drink alcohol include women who are pregnant, individuals younger than 21 years of age, and people who are recovering from alcoholism or cannot control the amount they drink. Also, it should be avoided by people who are planning to drive or any other activity that requires focus, alertness, and skill.

Different countries have different legal guidelines on alcohol consumption. According to the “Dietary Guidelines for Americans 2015-2020”, moderate drinking is up to 1 drink per day for women and up to 2 drinks per day for men.

If consumed in excess, vodka can result in the following:

Certain medications may also interact with vodka. It may increase the risk of side effects or reduce the effectiveness of the medication. It is always advised to consult a doctor and read the instructions carefully while taking such drugs. Drinking before driving may hamper alertness and increase the risk of accidents. People who are not able to handle or react with nausea, vomiting or any other symptoms even after a small drink should refrain from drinking alcohol at all.

Rate this article
Average rating 4.0 out of 5.0 based on 450 user(s).
Read This Next:
Popular Articles