The benefits of reflexology may include its ability to stimulate nerve function, increase energy, boost circulation, induce a deep state of relaxation, and eliminate toxins from the body. Moreover, it might help stimulate the central nervous system, prevent migraines, and treat urinary tract conditions. This type of massage may also speed up recovery after an injury or surgery, reduce sleep disorders, and relieve depression and pain. It might also help in relieving side effects associated with cancer treatment and even soothe the pain of pregnancy, even the one occurring after delivery. [1]

Whether you work in an office, a factory, a field, a hospital, or anything in between, there is a good chance that you put a lot of weight and stress on your feet every day. It is not always the back, stress can manifest itself in the other parts of our body too. People often opt for massages, so it makes sense that there should be foot massages too, right? Reflexology is much more than a foot massage, but at its foundation, that’s the easiest way to describe the process. This specific area of massage therapy also includes hands and ears, making it a holistic massage. [2]

Reflexology may be an alternative treatment for a variety of conditions and has been in use for thousands of years. The ancient Chinese and Egyptians may have documented practices similar to reflexology as a treatment for certain afflictions. It involves the reflexologist applying pressure to specific areas in the hands, feet, and ears that affect certain reflex areas of the body. [3]

Imagine there is a connection between zones of your feet and hands that may represent certain areas of your body that can be adjusted or managed through these zones. A lot of the theory behind reflexology has to do with aligning your qi, but even for those who normally don’t invest much in this discipline, there are plenty of studies that have supported the claims of reflexologists.

It is not widely accepted in the medical world, but thousands of physicians across the globe have been using reflexology for generations, with surprisingly positive results. If there are treatments for more than a dozen health conditions affecting various parts of the body, isn’t it worth giving reflexology a try?

The health benefits of reflexology may include its ability to improve the nerve functions, raise energy levels, increase circulation, and much more.

As we age, our nerve endings become less sensitive in many parts of our body, particularly in our extremities. That being said, reflexology has been connected with stimulating more than 7,000 different nerve endings in a single session, thereby increasing their function and reactivity. Opening and cleaning out neural pathways can help improve functionality and flexibility in many areas around the body. Neural pathways are like muscles, so it is good to work them once in a while to keep them sharp! [4] 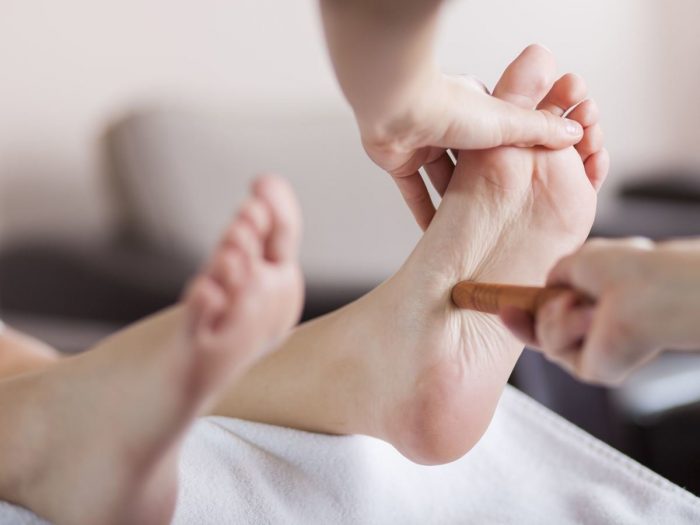 By aligning the functioning of various organ and muscle systems, reflexology can increase metabolism and energy creation processes within the body. If you need a boost of energy or are always feeling sluggish, perhaps a reflexology session can help put some pep back in your step! [5]

One of the most well-known and verified benefits of reflexology is an improvement in circulation throughout the body, which means that blood and oxygen are being cycled through the body more effectively. This means more oxygen reaches vital organs, thereby optimizing their functioning and further increasing the metabolism. This also results in faster healing and re-growth of damaged cells. [6]

As mentioned above, reflexology has been known to open neural pathways, and this sort of free-flowing neural activity results in a more relaxed state in the body. For this reason, reflexology can flood your system with relaxation, inducing a state of calmness throughout your body and mind. In this same vein, reflexology is commonly used to cure sleep disorders. Insomnia can be a very troubling condition to suffer through, but reflexology helps your body relax and get back to its normal, healthy circadian rhythms. [7]

Reflexology has been shown to improve bladder function and reduce urinary tract issues. What this means in terms of toxicity is a more efficient system of eliminating toxins and other foreign substances, thereby protecting your body from the various diseases and health conditions that can often arise from a compromised urinary system. [8] 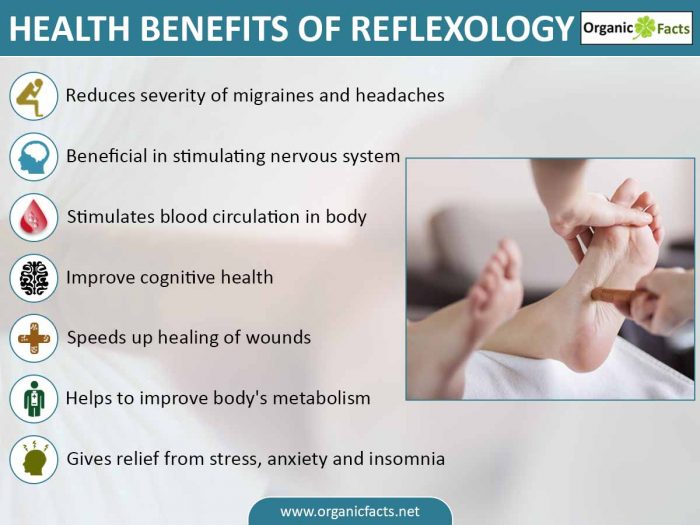 Reflexology is very helpful for your muscles. Photo Credit: Shutterstock

May Help Stimulate The Nervous System

The open neural pathways may benefit our central nervous system in a variety of ways. It may not only enhance the brain’s ability to handle inputs more effectively, thereby speeding up our cognitive powers, but also boost memory. [9]

Reflexology may be primarily used by many people as a method of eliminating pain. As an analgesic treatment, reflexology might help reduce the severity of a migraine and headache, simply by relieving tension in the muscles that can often result in these conditions. A headache induced by stress may also be eliminated since stress and psychological factors often manifest in the physical symptoms of a migraine. [10]

The combination of increased nerve activity and circulation, as well as the balanced functioning of the metabolism, means that cells re-grow faster and wounds are able to heal quickly. Also, the pain-relieving qualities of reflexology may mean that patients recover rapidly, and are willing to get back into routine life!

Relieves Side Effects of Cancer Treatment

Although reflexology may not be directly connected to curing cancer, it has been known to ease the side effects of cancer treatments, such as chemotherapy. It might help cancer patients get a sound sleep by reducing anxiety and also reduces the chances of vomiting or other commonly experienced indigestion issues. The more general effects of reflexology, such as clearing neural channels and increasing circulation help patients. [11]

Studies have shown that reflexology can be very beneficial for pregnant women, particularly in terms of labor lengths and their need for analgesics during labor and postpartum recovery time. Beyond that, due to many of the health benefits already outlined above, it may help reduce the chances of postpartum depression and can also help a woman’s body heal itself faster and get back to its normal metabolic activity quickly. [12]

Although much of the research on reflexology has been criticized or cited as unprovable, thousands of years of tradition and reports of success speak rather loudly. That being said, reflexology should be considered as a supplemental treatment to formal medical advice and treatment for the conditions that have been touched on in this article.

Rate this article
Average rating 4.1 out of 5.0 based on 627 user(s).
Read This Next:
Popular Articles