Artichokes are a versatile food, and although some would consider them a vegetable, they are actually a variety of thistle. For nutritional purposes, they may primarily be consumed due to their associated benefits of potentially bolstering the immune system strength, lowering cholesterol, and protecting against diseases such as atherosclerosis, heart attack, and stroke.

Artichokes might have also long been famous for detoxifying the body and improving the health of the liver and aiding in digestive issues like indigestion, constipation, irritable bowel syndrome (IBS), and diarrhea. They may also have anti-cancer potential, besides reducing blood pressure, eliminating hangovers, and stimulating urination.

Artichokes are edible plants, known in their natural form as cardoon, and their scientific classification is Cynara cardunculus. They are a native to the Mediterranean region, which is primarily why they play such a major part in their cuisine. Artichokes can be found throughout Europe, the Middle Eastern countries, and America, but they are less frequently encountered in Asian nations.

The edible part of an artichoke is the bud within the flower head before it fully blooms. Timing is key in cultivating them, as they turn hard and nearly inedible once the flower has fully bloomed. Also, one of the most sought-after parts of the thistle is the “heart”, which is the base from which the other buds spring. It is often considered a delicacy or at least the most delicious part of the plant and is generally more expensive.

According to USDA artichokes might be low in saturated fat and cholesterol while being a rich source of fiber, vitamins, and minerals. They may contain vitamins including vitamin C, thiamin, riboflavin, niacin, folate, vitamin B-6, B-12, A, E, D, and vitamin K. They might also provide minerals such as calcium, iron, zinc, sodium, potassium, manganese, phosphorus, and zinc. [2]

The common health benefits of these thistles are mentioned in detail below.

Artichokes may have the highest antioxidant levels out of all vegetables, according to a study done by the USDA, and out of 1,000 plants of different types of foods, they ranked 7th in antioxidant content.

A 2018 study published in the Lipids in Health and Disease journal suggests that the extracts made from Jerusalem artichoke leaves and tubers might be very helpful in inhibiting cancer cell proliferation. [3]

Artichokes may be an arsenal of weaponry against cancer as they are rich in polyphenols. The extracts of artichokes make for a promising dietary tool in cancer prevention as well as in therapy. This was mentioned in a study conducted by the Regina Elena National Cancer Institute, Italy. [4]

Many other research studies have also explored and found that artichokes may hold therapeutic potential for the treatment of mesothelioma. [5] 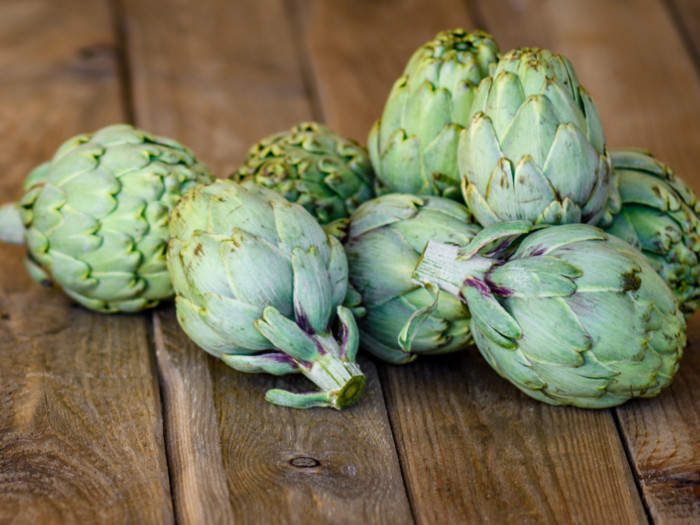 Artichokes may be considered a heart-healthy addition to your diet for a variety of reasons. Certain ingredients in their leaves might have been found to reduce the levels of bad cholesterol (LDL) and increase the levels of good cholesterol (HDL or omega-3 fatty acids). Cholesterol is a type of fat that builds up in the arteries of the cardiovascular system, blocks blood flow, increases blood pressure, and can lead to potentially fatal heart attacks and strokes. Any method of reducing bad cholesterol is worthwhile, so give artichokes a chance at improving your heart health. [6]

On a related note, artichokes might also be rich sources of potassium, the essential mineral that has an impact on numerous organ systems throughout the body. Potassium may help neutralize the effects of excess sodium, which is notorious for increasing blood pressure. Artichokes, therefore, might act as a vasodilator and are particularly useful for those already taking hypertension medicine to prevent the effects of potassium deficiency. Diabetics are also encouraged to eat artichokes to prevent the complications associated with blood pressure and that disease. Finally, a reduction in blood pressure can reduce the chances of heart attacks and coronary heart diseases. [7]

Artichokes may have been used as liver tonics for centuries, but the exact mechanism of their impact was never fully understood until modern science could properly research this versatile plant. Two antioxidants found in artichokes, cynarin, and silymarin, may have been shown to improve the overall health of the liver by possibly reducing the presence of toxins and facilitating their elimination from the liver and the body. Some studies have even shown these antioxidants to actively promote regrowth and repair of damaged liver cells. [8]

May Help In Smoother Bowel Movements

Artichokes might be a rich source of dietary fiber, which is one of the most beneficial nutritional staples for improving the health and functionality of your digestive system. Fiber adds bulk to the food you eat, which may help keep your bowel movements regular and decrease the symptoms of constipation. [9]

Fiber can ease bloating, cramps, excess flatulence, and general discomfort in the stomach. Furthermore, if you have problems with loose stool or diarrhea, fiber can absorb excess liquid and form healthy, predictable bowel movements in patients. Fiber also acts as a clean up crew for excess LDL cholesterol (bad cholesterol), thereby cleaning your arteries and further reducing your chances of heart diseases.

Another extra benefit of artichokes in terms of digestion may be its impact on the gallbladder. Artichokes might help soothe inflamed gallbladders and can solve the common problem of a blocked duct in the organ, thereby allowing normal function. Therefore, in a way, artichokes can be said to stimulate the production and secretion of gastric juices, as well as bile, which also aids in smooth digestion. [10]

May Be A Good Hangover Cure

As mentioned earlier, artichokes can be a great salve to the liver and may reduce any blockage as well as levels of toxins in the blood by eliminating them quickly. Therefore, artichokes might make a perfect hangover cure. Some people choose to chew on a few artichoke leaves after a night of heavy drinking.

As if all of these other health benefits weren’t enough, artichokes may even help pregnant women have healthy, normally-formed children. The high levels of folate found in them might help prevent neural tube defects from occurring in newborns. The neural tube closure process in vitro requires a certain amount of folate to occur properly, so folic acid is an essential part of a pregnancy diet. [11]

Artichokes might be one of the best foods in the market for acquiring vitamins and minerals like magnesium, phosphorus, and manganese. These minerals may be essential parts of increasing bone health and density, thereby reducing the chances of conditions like osteoporosis. [12]

Magnesium and manganese may be essential parts of the body’s metabolic processes and they are found in a significant amount in artichokes. Magnesium is an important part of protein synthesis throughout the body, as well as optimizing the intake of calcium by the body, further strengthening the bones. Manganese is slightly more involved than magnesium, and it impacts the metabolic rates of cholesterol, amino acids, and carbohydrates.

There are a number of aspects of artichokes that may make them beneficial for brain health. Their quality as a vasodilator allows more oxygen to reach the brain for elevated cognitive function. Phosphorus, an essential mineral potentially found in artichokes, may also be found in the brain cells. Phosphorous deficiencies have been associated with a serious decline in cognitive ability, so if you want to keep your brain healthy and firing on all cylinders, eat the next artichoke you see. [13]

Before cooking artichokes, wash and cut the little thorns which are at the end of the leaves. Also, cut the excess stem as that may be bitter in taste. Artichokes can be cooked in a pan of water, you may also add herbs and spices for added flavor. Once cooked, they can be eaten hot or cold and can also be served with dips and sauces.

Word of Caution: Although these benefits seem tremendous, there are dangers connected to almost any food item, and it is important to do your research. Some people may be sensitive to the effects of artichokes due to allergies, particularly in terms of artichoke leaf extract as it is in a concentrated form. Since these plants are technically a thistle, not a vegetable, they may closely be related to ragweed, daisies, marigolds, or chrysanthemums. Many people who suffer from those allergies may also have a bad experience with artichokes.

Those already with liver disease or gallbladder conditions should not begin adding artichokes to their diet because they may exacerbate certain negative aspects of the disease. They should be used as a preventative method for liver and gallbladder disease, not a cure. Finally, they make people urinate frequently, so if you already suffer from an overactive bladder, artichokes could make that minor condition even worse.

Other than those specific warnings, artichokes are a valuable and irreplaceable element of your cuisine. So eat up and stay healthy!

Rate this article
Average rating 4.0 out of 5.0 based on 350 user(s).
Read This Next:
Popular Articles