Although Epsom salt baths are a rather old remedy, they are still very useful for cleansing the body, drawing out toxins, and soothing inflammation. Many of the compounds found in Epsom salts are easily absorbed by the skin, allowing them to act quickly and directly on the body. If you take an Epsom salt bath at least once a week, you can provide a major boost to your immune system to eliminate Helicobacter pylori, and also enjoy a wide range of other health benefits. [1]

One of the most popular remedies for any infection of the gastrointestinal or urinary tract is cranberry juice, due to the high concentration of antibacterial compounds found in the fruit itself. This juice has an anti-adhesive effect on bacteria, making it difficult for them to colonize the stomach, and promotes their elimination through normal excretion and urination. [2] 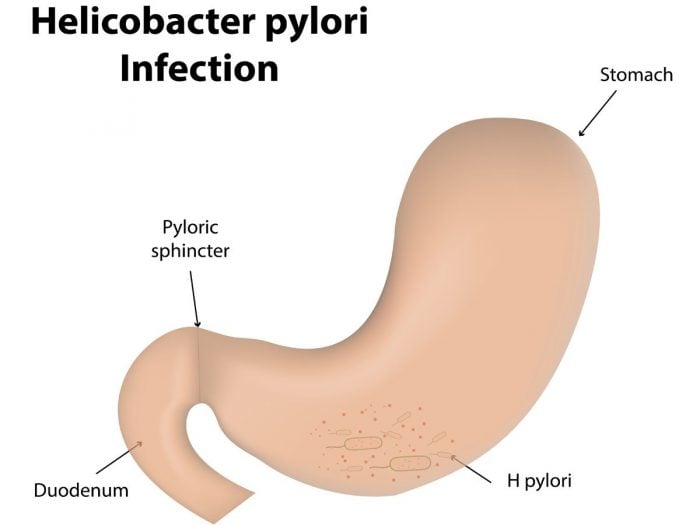 A bacterial imbalance in the stomach can wreak havoc on your overall health and nutrition, because there are actually many beneficial bacteria that we need for digestion and gut health. Unfortunately, a Helicobacter pylori infection upsets the balance, resulting in inflammation and chronic health risks. Probiotics essentially replace the healthy bacteria you’ve lost in your gut, reducing symptoms and helping to inhibit bacterial colonization. [3]

As with so many home remedy lists, green tea makes the cut for this infection. The impressive range of catechins and epicatechins found in this globally popular tea variety are well known for their antibacterial effects and stimulation of the immune system. If you want to eliminate bacterial infections of any kind in the body, particularly early on, then green tea is probably your best and most accessible option. [4]

Grapes are well known for their high antioxidant content, as well as the polyphenols, which are maintained in the wine-making process. A glass of red wine a day may be all your body needs to boost its antibacterial activities and safely eliminate the Helicobacter pylori bacteria from your system. [5]

Matula tea is an interesting combination of various herbs, all of which have antibacterial properties, and when brewed in conjunction, the effects on the stomach are very powerful. It works as a cleanser and a diuretic to eliminate toxins, neutralizing the bacteria and reducing inflammation in your stomach lining and intestines. [6]

The well known potency of apple cider vinegar makes it a likely candidate as a remedy option for treating a Helicobacter pylori infection. This readily available substance has antibacterial, antifungal, and antiseptic properties that are used for many different illnesses. It has been directly linked to eliminating Helicobacter pylori infections and is widely prescribed by natural healers and herbalists. [7]

Manuka honey may not be the most common item found in your local grocery store, but research studies have shown that it has a direct inhibitory effect on the growth and spread of Helicobacter pylori bacteria. If you can stop the infection in its tracks, then some of these other popular remedies can come in for the “killing blow” to fully heal your system. [8]

The soothing, stomach-coating, anti-inflammatory nature of olive oil makes it ideal for treating this particular infection, in addition to its antioxidant and antibacterial properties. Drinking small amounts of olive oil to settle the stomach, or switching over to cooking with olive oil, can be beneficial to many of your health concerns, including your susceptibility to Helicobacter pylori. [9]

Pine nut oil has been used for thousands of years in some cultures due to its ability to relieve symptoms of indigestion and stomach inflammation to ulcers. Primarily popularized in Russia and Siberia, this concentrated antibacterial oil is highly effective at slowing the spread of this infection and minimizing the symptoms. [10]

Mastic gum may be a bit more difficult to acquire, but this resin from the pistachio tree has been shown to rapidly kill Helicobacter pylori bacterium, making it one of the most popular and fastest-acting remedies for this type of infection. Dating back to ancient times, mastic gum has alleviated ulcers and eliminated infections, and modern research shows that this is due to the gum causing fundamental changes to the bacterium, thus neutralizing it and keeping us healthy! [11]

A Final Word of Warning: As mentioned above, these infections are commonly asymptomatic, but can worsen over time and increase your risk of serious ulcers and cancer. If you believe that you are suffering from a stomach infection, you should speak to a medical doctor and determine the severity of the infection. In serious cases, you should consider these home remedies as complementary treatments to the medications prescribed by a physician.

Rate this article
Average rating 4.0 out of 5.0 based on 185 user(s).
Read This Next:
Popular Articles